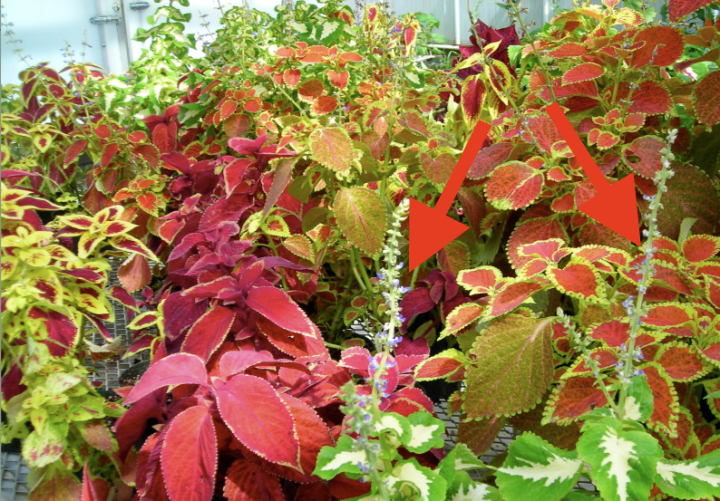 I can well remember the coleuses of my childhood, with beautifully colored foliage, true enough, but they were all upright plants that you put at the back of the border because they soon lost their lower leaves and began to look ungainly. There was never a sign of branching… that is, unless you induced it by pinching. Every time you pinched the tip of a branch, it produced two branches, so the idea was to pinch early and often, which gave you a nice, full, rounded plant you could put on display in the front of the border or in a container.

Plus, you had to pinch off the flower stalks that inevitably appeared at the stem tips. The insignificant narrow spikes of bluish flowers added nothing to the plant’s appearance and the plants would start to go into decline after they bloomed, losing their lower leaves and looking very awkward.

The result was that there was a lot of pinching going on!

Flash forward to today. Most modern coleuses branch all on their own, naturally forming dense, shrubby plants. This is not due to some magical hormonal treatment or to GMO manipulation. Over the years, hybridizers have simply been crossing the top-perfoming coleuses together and keeping the best of the brood for further breeding. Genes for self-branching and also delayed flowering were brought to the fore and became the norm. This is the same process that changed ordinary garden weeds into the vegetables that we eat today, that is, keeping seeds of the best specimens to sow the next year until you get a plant that suits your needs.

Thus, you no longer have to pinch or prune most modern coleuses: they grow perfectly without your help. It’s the ideal situation for the laidback gardener! Except that…

Some varieties are not as “advanced” as others and begin to bloom early, in August or even July. This is especiallyly the case for varieties that are normally grown from seed rather than cuttings, such as the Wizard and Giant Exhibition strains. It may therefore be necessary to pinch (prune) these varieties at least once, as soon as you see the beginning of a flower spike.

Pinching off coleus flowers is a snap: just squeeze the spike between the thumb and forefinger until it comes free. Or cut it off with pruning shears. It only takes a second.

Still, that’s an extra effort I prefer to avoid.

Which Varieties to Save?

One can, of course, treat coleuses like annuals and buy new ones each spring, but not being in the “money is no object” category, I bring in cuttings of my favorite varieties in the fall. I root them and grow them over the winter under lights or on a sunny windowsill, then in spring, take cuttings of my cuttings to fill my summer garden. And one criteria that is important to me and helps determine which to keep is lack of bloom: I automatically drop from my list any coleus that even shows a sign of a flower stalk during the summer months. I prefer the total laidbackedness of varieties that are not inclined to bloom prematurely*.

*These coleus will bloom nevertheless (all coleuses will), but only when they have a long growing season, for example, if they’re grow year round in a greenhouse.