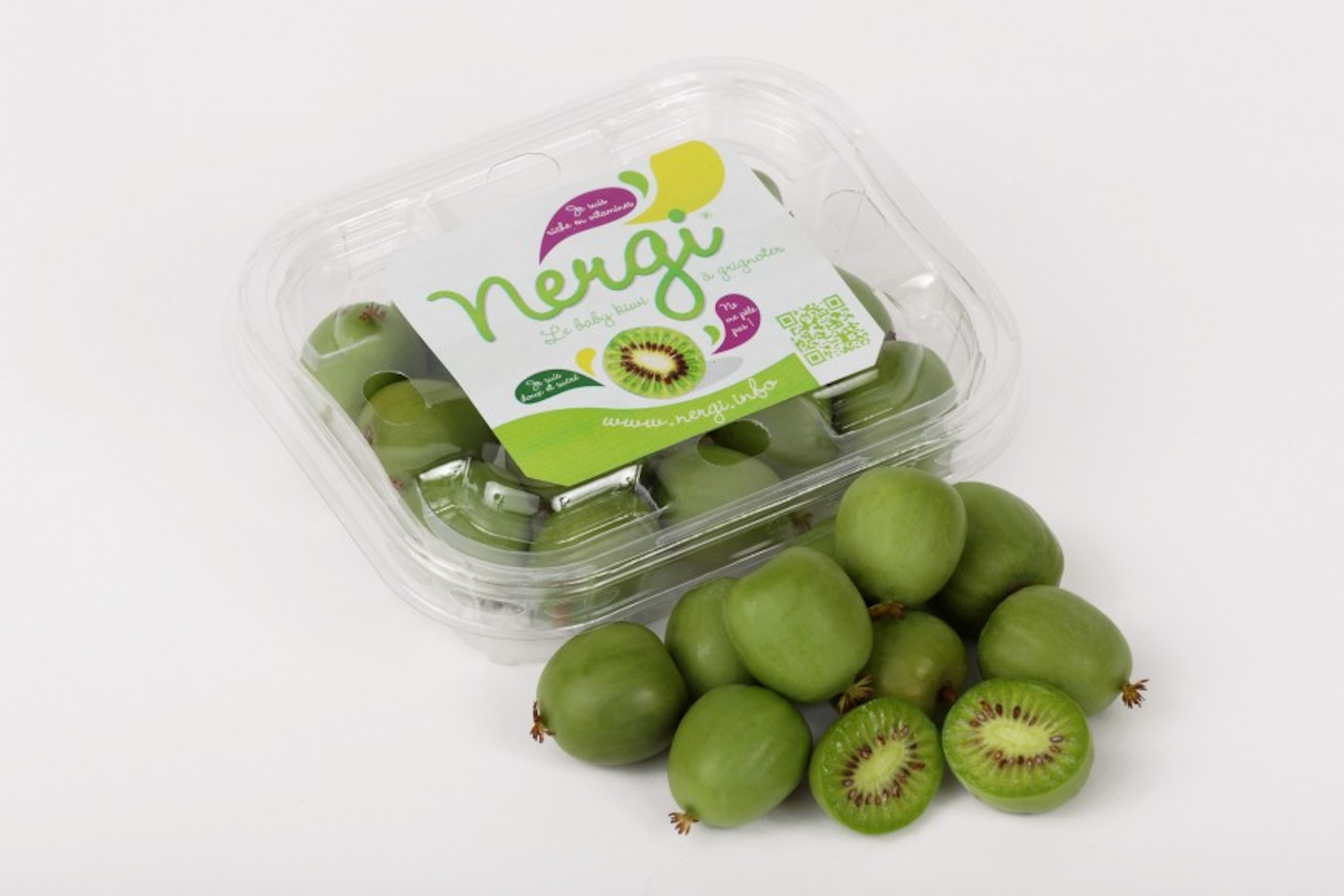 Yes, these are Nergis… or is that Nergi fruits? Source: www.fruitnet.com

Expect to see a new fruit on the market, the Nergi®, which its European growers are planning to place in big city supermarkets across North America this September. So what is it? And is it really new? Read on to learn more!

A Name Leading to Confusion

First, the name. Nergi is simply a trademark for a cultivar of fruit whose patent belongs to Scaap Kiwifruits of France, an agricultural cooperative. It aims to make this fruit even more popular than its much larger cousin, the kiwifruit (A. chinensis), but for that, they needed a name. And they chose Nergi.

You see, you’re supposed to pronounce the name EN – er – gee … in other words, energy. But I didn’t get it on my own and I suspect that supermarket staff won’t either. Everyone will be trying to call it something like “NER-gee” or “NER – guee” at first. Nothing like confusing people from the start!

I’ve been watching journalists trying to stumble through ways of using the name in their writing: Nergi fruit (“energy fruit”) perhaps or Nergi berry (“energy berry”). And would Nergis be a possible plural? In Great Britain, though, where it has been on the market for a few years now, the public seems to be simply calling them baby kiwis. Baby kiwi? Sooo much easier!

The Nergi baby kiwi is being presented as if it were something totally new, a brand new, never before seen fruit … but it’s really more a new variety of an older but fairly obscure fruit rather than a totally new one.

Behind the trademark Nergi® is a fruit already fairly well known to home gardeners, but under the name of hardy kiwi or hardy kiwifruit. Its botanical name is Actinidia arguta* and it’s a climbing plant hardy to zone 4b, very easy to grow. You may already be growing one yourself! But the fruit of the Nergi variety is actually a bit bigger and rounder than most hardy kiwis. And it’s true that the other varieties of hardy kiwifruits were not often seen on supermarket shelves, so that does make the Nergi one new to shoppers.

*In fact, the cultivar being called Nergi is probably not a true A. arguta, but rather a complex hybrid involving that species and one or more others. However, that’s just a personal theory and I can’t confirm it, because its actual pedigree is a well-kept secret. Since its promoters are saying it’s A. arguta, I’ll leave it at that for the purposes of this article. But I have my doubts!

The small green globular fruit of the Nergi is the size of a large grape but more rounded, more the shape of a small apple. Sweet and tangy, it has about the same taste as the classic kiwifruit we all know and the same tiny black seeds inside. However, its skin is smooth and that makes a huge different in marketing. Who likes to peel fruit? So marketers will be blasting “No need to peel it! Just pop it into your mouth and bite down. Yummy!” (And it really is delicious.)

And it is also good for your health! (Hey, it’s a fruit: what else would you expect?) It’s said to be very rich in fiber and vitamin C and to contain many other important minerals, including calcium, potassium, magnesium and iron. In fact, the Nergi baby kiwi is richer in vitamin C than your usual kiwifruit!

From New Zealand to France to the World

Although the variety now called Nergi is being produced massively in Europe, it in fact comes from a New Zealand breeding program run by the Plant and Food Research Laboratory there. They were working on trying to make the hardy kiwifruit (A. arguta), originally from Asia, more interesting for the market. It was certainly tasty enough, but the berries only lasted for seven or eight days after harvesting. That’s not much in the world of fruits.

By crossbreeding (the promoters go out of their way to explain this was done by manual pollination and therefore that the new berry is not a GMO), the researchers managed to develop a hardy kiwi whose fruits stay in good shape for up to three months after picking: that’s about 11 times longer than usual! And it makes a world of difference in marketing!

You’d think the Kiwis (New Zealanders) would have run with the ball, but they didn’t seem know what to do next and so instead handed it to the French.

In 2005, French kiwi grower, François Lafitte, saw the new fruit in New Zealand and knew he’d found gold. He brought some samples to back to France, presented it to Scaap Kiwifruits of France and sold them on the idea of launching a massive program to introduce it commercially. They negotiated an exclusive license to exploit the fruit in Europe and named it Nergi®, then began mass plantings, mostly in France, but also in other European countries. The first orchard was planted in only 2010 (I say only, because it takes 4 years for the vines to produce their first fruit, so that’s like … yesterday!) and others quickly followed. The fruit was launched in 2015 and was a huge success, first in Germany, then France, now just about everywhere on the continent. This year, some 50 million packs will be produced and more are to come. That’s now enough to try and grab a piece of the lucrative North American market.

The fruits mature in August and September and will remain on the market until November. With greenhouses, growers in the Southern Hemisphere and a bit of research, it will probably be possible to have it available year-round in the near future.

Will You Be Able to Grow Your Own Nergi?

No, actually. Not yet, at least. The plant is protected by plant patents and only licensed growers have the right to produce it. Talk about a bummer! However, you can grow other hardy kiwi cultivars and there are many around. You will find some details on growing hardy kiwis in the article Is My Kiwi a Male or a Female? (A very important question indeed: read the article to find out why!)

So, for the moment, you can’t grow Nergi baby kiwis, you can only eat them!

The Nergi baby kiwi: look for it in a supermarket near you!

0 comments on “The Nergi: Coming Soon to a Supermarket Near You!”