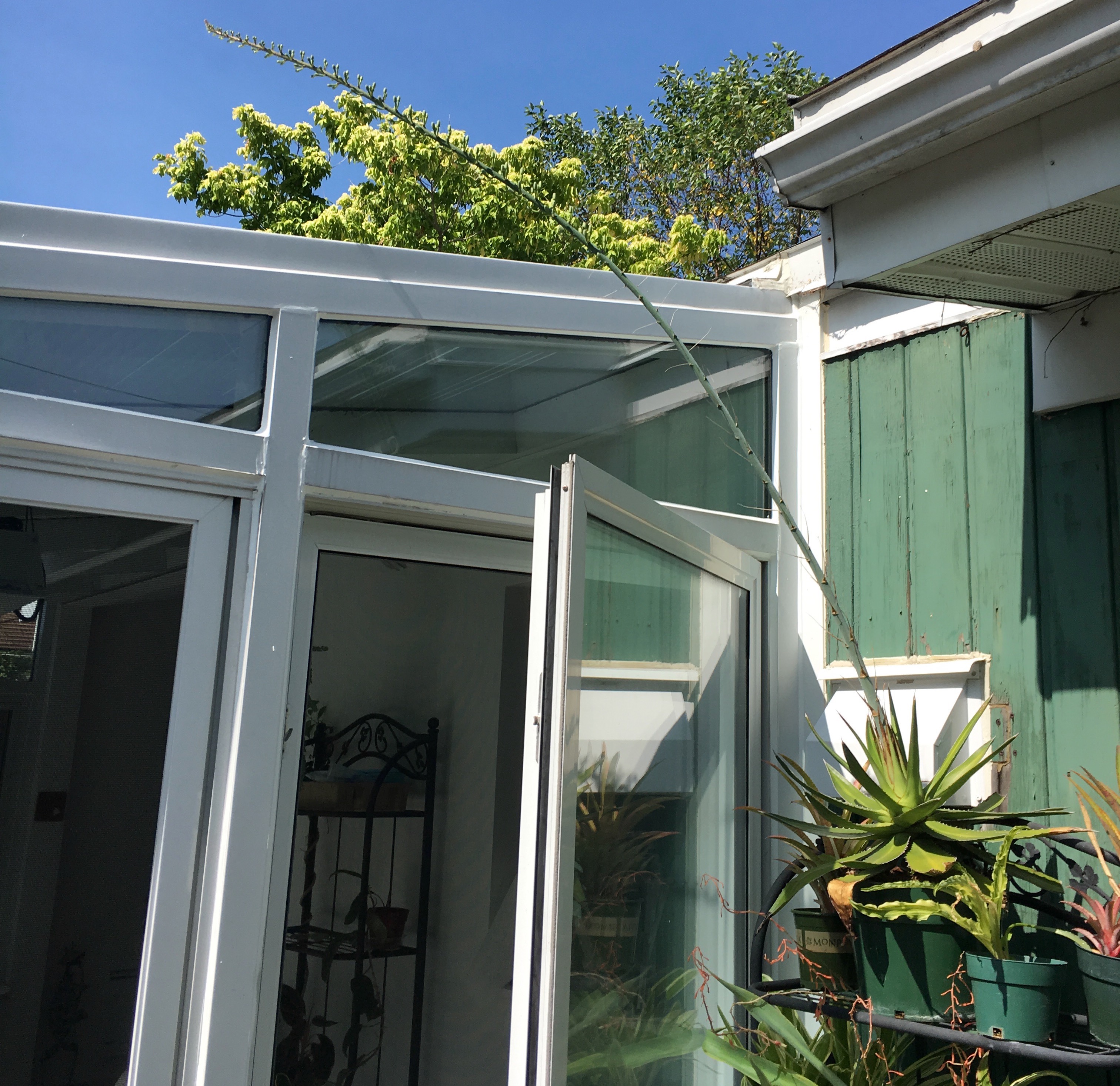 Yes, that’s my agave in the photo, Agave univitatta ‘Splendida’, sometimes called center stripe century plant because of its broad central pale green stripe. I bought it under the name A. lophantha almost 20 ago. And now it’s blooming, for the first and last time.

You see, agaves only bloom once, massively … then they die. That’s why they’re said to be monocarpic. And that’s where the name “century plant” comes from. It was once believed that they bloomed only once a century (every 100 years), although now we know that most take less than 30 years to bloom and in smaller species under ideal conditions, that can be 10 years or less.

My agave has produced hordes of offsets over the years. Sometimes I left them on for a few years, sometimes I removed them. Some were given away. Others spent the summer as ornamentals, stuffed into my flower border, then were killed off by the winter’s cold (I live in USDA zone 3, far too cold for any agave). For the last few years, I’ve been removing them all so the plant took up less space: it’s about 20 inches (50 cm) across. A. univittata is small for an agave, but that’s still rather substantial for a houseplant. As a result, I find myself with no “baby” to carry on. I’ll have to start it again from seed when they mature. I’m not sure if the stripe will persist though, but then, what is gardening if not a long series of experiments?

A Smaller Agave Than Usual

A. univittata ‘Splendida’ is one of the smaller agaves, which is why I still have it. Over the years, I’ve picked up others, often offsets from giant plants I’ve seen on my travels, but eventually had to give them away or dump them as they just took up too much space in my greenhouse. For example, I kept a fox tail agave (Agave attenuata) for over 20 years—an oddball in the agave genus in that it is spineless and is not ground-hugging, but forms a thick, trunk-like stem—until it was so huge I simply couldn’t find a pot weighty enough to keep it standing upright. There are few homes for oversized houseplants, so it ended up in the compost pile, a victim of its success.

That my A. vittata bloomed in the summer has been a boon. I wouldn’t have had room to let its stem reach its full height (about 8 feet/2.4 m so far and I don’t think it has quite finished growing) indoors.

Agave (Agave macroantha ‘Blue Ribbon’) to the left, aloe (Aloe vera) to the right: note the vicious spine on the tip of the agave leaf. Source: www.plantdelights.com and www.plant-lore.com

People often confuse agaves with aloes (Aloe spp.) and indeed they are both succulents and similar in appearance to a certain degree, although they are only very distantly related. Their last common ancestor is thought to have existed around 93 million years ago, back in the time of the dinosaurs, and they’ve evolved independently ever since.

Agaves are in the Asparagus family (Asparagaceae), aloes in the Aloe family (Asphodelaceae); agaves are from the New World (mostly Central America and the Caribbean), aloes from the Old World (Africa and the Arabian Peninsula). They’re a popularly cited example of convergent evolution: they’ve come to resemble each other because they grow under similar conditions (a hot, arid climate) where fleshy, water-storing leaves, protective spines and a squat, dense shape are good adaptive strategies. As a result, they grew to look alike.

Not sure which is which? Try to cutting off a leaf. Aloe leaves are filled with gelatinous sap; agave leaves with tough fibers. That’s a sure giveaway. And there are many other more subtle differences. For example, most agaves have a particularly nasty spine on the tip of their leaves while the tip of most aloe leaves is either spineless or bears spines no more threatening than others on the leaf.

Once you’ve grown a few, you won’t need to cut off leaves: you’ll find you can tell them apart just by looking.

So, agave, I wish you a good blooming. I’ll look forward to growing you again in form of one of your offspring!

0 comments on “When an Agave Blooms”