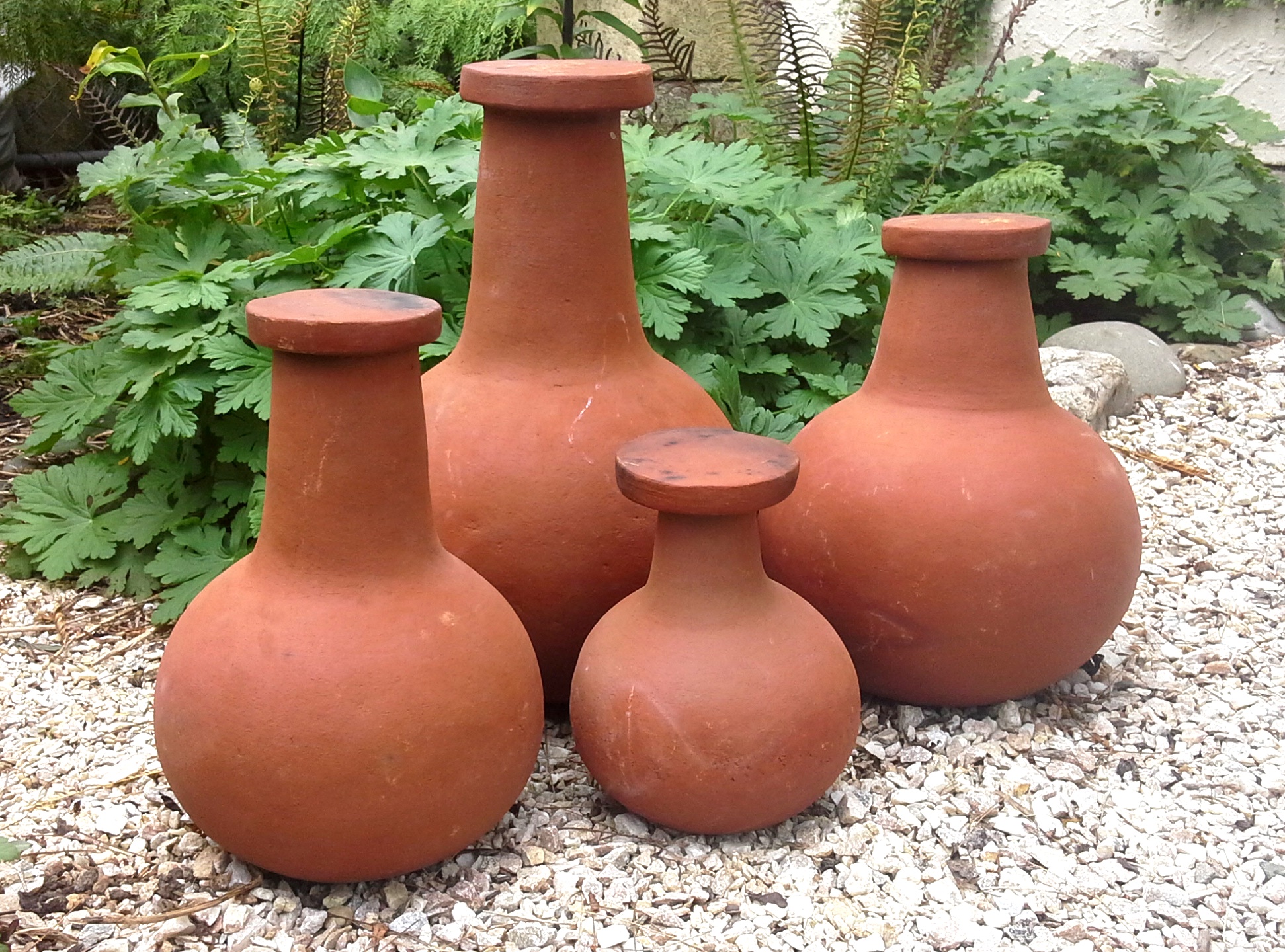 These ollas are sold in New Zealand… so why not Canada? Source: http://www.selaogardenart.co.nz

Let’s answer the first question first: in the gardening world, an olla (also written oya… and pronounced “oya” too!) is a very simple watering system.

It consists of a terra cotta container designed to be inserted into the soil. When filled with water, its porous sides let water flow out slowly, thus keeping the soil nearby evenly moist. You just have to insert one here and there in your vegetable garden (where they’re usually used) or in any kind of planting, really, burying it nearly to the top in soil, then add water as needed. They come with a lid to keep water in and dirt and gardening debris out.

Originally, an olla was simply a cooking pot. The word comes from Latin and is widely used in Spanish-speaking countries to describe just such a pot. But at some point, someone discovered you could water plants with one and that caught on.

Ollas are now widely used in home gardens in arid climates, mostly in the New World (Mexico, for example) and the Mediterranean, but elsewhere too. I saw them in use in Arizona, for example.

Where Can I Find One?

Well, that’s the harder part, at least where I live. You see, I can find no sources for an olla in my entire country, Canada.

Yes, I know, you can scarcely walk into a garden center in the Southwestern US without running into an olla display and you can even find them in Home Depot stores elsewhere in that country. Also, they’re new, trendy and widely available in Europe as well. I know I could order one from a US source, but they’re already quite expensive to start with and, with shipping, handling and duty added, would cost more than I really want to spend.

So, I Made My Own

Given my lack of success in finding a commercial olla, I made my own last summer. It was simple as pie to do: I just took a clay pot and plugged the hole in the bottom with a cork. Then I sank the pot nearly to its rim in the ground, filled it with water and covered it with a plate to reduce evaporation and to keep mosquitoes out.

At this point, I’m supposed to say it worked like a charm, but it didn’t, really.

It did work to some degree, but, to be honest, most years my vegetable garden really doesn’t need much watering, and such was the case last year. I’m big on mulch, which cuts down on evaporation, keeps the soil cool, and reduces watering needs. Plus, I live in a fairly rainy climate to start with. I usually expect either a rainy day or at least a downpour about once a week. The result was that, although I needed to add water to my homemade olla about twice a week (otherwise, it drained completely), it didn’t seem to make much of a difference to the plants. The ones well away from the olla seemed to do about as well as those nearby.

Also, other than an initial hand soaking to get seedlings and new transplants started (required with or with the olla), there was only a two-week drier period in August when I did have to water the other vegetables … but I just used my usual soaker hose. It just lays in my garden year after year, ready for use whenever I need it. To be honest, filling the ollas biweekly took much more time total then turning on the tap to the soaker hose twice that summer. Plus, I’m sure the olla used much, much more water, most of which seemed to have drained away unused. So much for a water-saving device!

Then came winter. Yes, I know I was supposed to bring my homemade olla indoors for the winter, because terra cotta cracks in the cold, but I have great snow cover (snow is a great insulator) and digging it up would have been such a hassle, plus it was an old pot of little value. So I took a chance and left it in the ground. Of course, it was in pieces by spring.

I try to imagine myself digging up one of the amphora-type ollas, but the way they’re shaped would make them hard to get out of the ground and I’d be afraid of cracking them with the shovel as I tried to extract them. Besides, do I really want the hassle of digging them into my (normally) no-dig garden each spring, then digging them up again? Also, I’d need several ollas to cover my vegetable garden’s needs and they’re quite expensive. A single soaker hose would cover much more garden space and cost a lot less.

I’ve read wonderful things about ollas and I’m sure they work wonderfully in arid climates where regular watering is vital and where winters are mild enough you can leave them in the ground year round, but I’m far from sure they make a lot of sense in cooler, damper climates. And they do take up space in the garden … and get in your way when you work there, so…

If ever I do find a manufactured olla available locally, I promise to try again, but I’m not hopeful I’ll get better results. Maybe I’m just not an olla person!