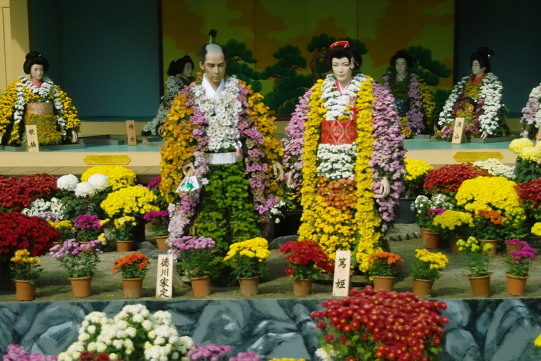 Chrysanthemum Day (菊の節句or Kiku no Sekku) is one of the five ancient sacred festivals of Japan. Also known as the Festival of Happiness, it is celebrated on the 9th day of the 9th month. Originally, this would have been the 9th day of the 9th lunar month, placing the festival at various dates in October, but now the Gregorian calendar is used, so the Festival takes place on September 9th.

The original chrysanthemum was Chrysanthemum indicum. The genus name is from Greek and means gold (chrysos) flower (anthemon), because of the bright yellow color of the inflorescence. Both the Japanese and Chinese names for the flower also translate as “gold flower.”

It’s a perennial found in mountainous areas of Asia, including India, China and Japan. It naturally blooms as day lengths shorten, therefore sometime between August and October, depending on latitude. It has long been used as a medicinal plant, treating respiratory diseases, fever, difficult menses and flatulence, and is edible as well, with young sprouts and petals being eaten in salads or baked into cakes, while leaves are brewed to make chrysanthemum tea and liqueur, considered festive and salutary drinks.

In spite of that, many people react negatively to chrysanthemum sap and may develop contact dermatitis after extended exposure to the plant. This is an occupational hazard of florists, nursery workers, and gardeners. And chrysanthemums are considered toxic to many animals, including dogs, cats and horses.

Tradition aside, might I suggest you really shouldn’t be eating chrysanthemums unless you know how to properly prepare them!

The original gold chrysanthemum was crossed with many other species, leading to today’s garden chrysanthemum or garden mum: C. x morifolium (Dendranthema grandiflora). There are now chrysanthemums in a wide range of sizes, colors and forms, some for garden use, others grown strictly as show flowers.

The original gold chrysanthemum (C. indicum) is only moderately frost hardy and can be grown from warm temperature areas to tropical ones (hardiness zones 7 to 12). Many garden mums (C. x morifolium) are not much more resistant to cold, limiting their use to moderate climates. However, much hardier garden mums have also been bred, some tough enough to thrive in zone 3. You can read more about them in the article Chrysanthemums for Cold Climates.

While chrysanthemums are celebrated in Japan and indeed, throughout Asia (China, Vietnam, etc.) and there are chrysanthemum festivals in fall throughout North America and Great Britain (Longwood Gardens in Kennett Square, Pennsylvania, hosts the largest American display of exhibition chrysanthemums from late October to mid November each year), plus bouquets of chrysanthemums are widely offered for all occasions, they are considered a symbol of death in France and Belgium as well as in a few other European countries, such as Italy, Spain, Croatia, Hungary and Poland.

Well, at least the Japanese have no phobias about chrysanthemums. Let’s wish them a happy Chrysanthemum Day!