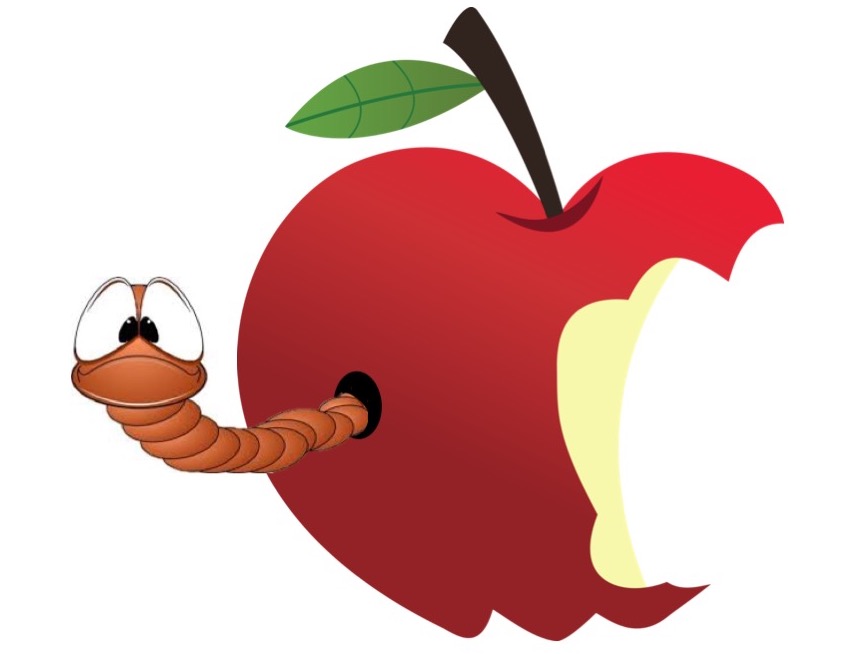 When an apple contains a worm, is it still edible? Source: clip2art.com & worldartsme.com. Montage: laidbackgardener.com

Question: This has been a bad year for apple worms and most of my apples are infested. Can I still use them for juice and apple sauce?

Answer: Sure! Humans have been eating wormy apples for thousands of years and, as the joke goes, a worm just adds a little extra protein.

In fact, it wasn’t really until pesticides were introduced back in the 19th century (arsenic, believe it or not!) and it became possible to produce apples without worms that we humans started to become squeamish about the subject. When you buy commercially produced apple juice and apple sauce, I can guarantee that there is some insect protein in it.

As a kid, I used to harvest apples from an abandoned orchard and eat the fruits, trying to eat around the worms (actually, not true worms, but the larva of the codling moth, Cydia pomonella). I probably swallowed a few without realizing it and now find the idea gross, but that’s a cultural thing. They are neither harmful to humans (nor animals) nor do they carry any harmful parasites. Now, worms digging into the apple will cause some rot and that can produce an off flavor, but even the bacterial and fungal species that cause rot in apples are not a hazard for humans.

What you should probably not do, though, is harvest fallen fruits that have been lying on the ground for a while. They could pick up harmful bacteria from the soil. People have been made sick, for example, by drinking unpasteurized apple juice made from fallen apples that came into contact with deer scat containing E. coli bacteria.

If you do harvest fallen apples, therefore, cook them thoroughly.

2 comments on “Can You Eat Wormy Apples?”