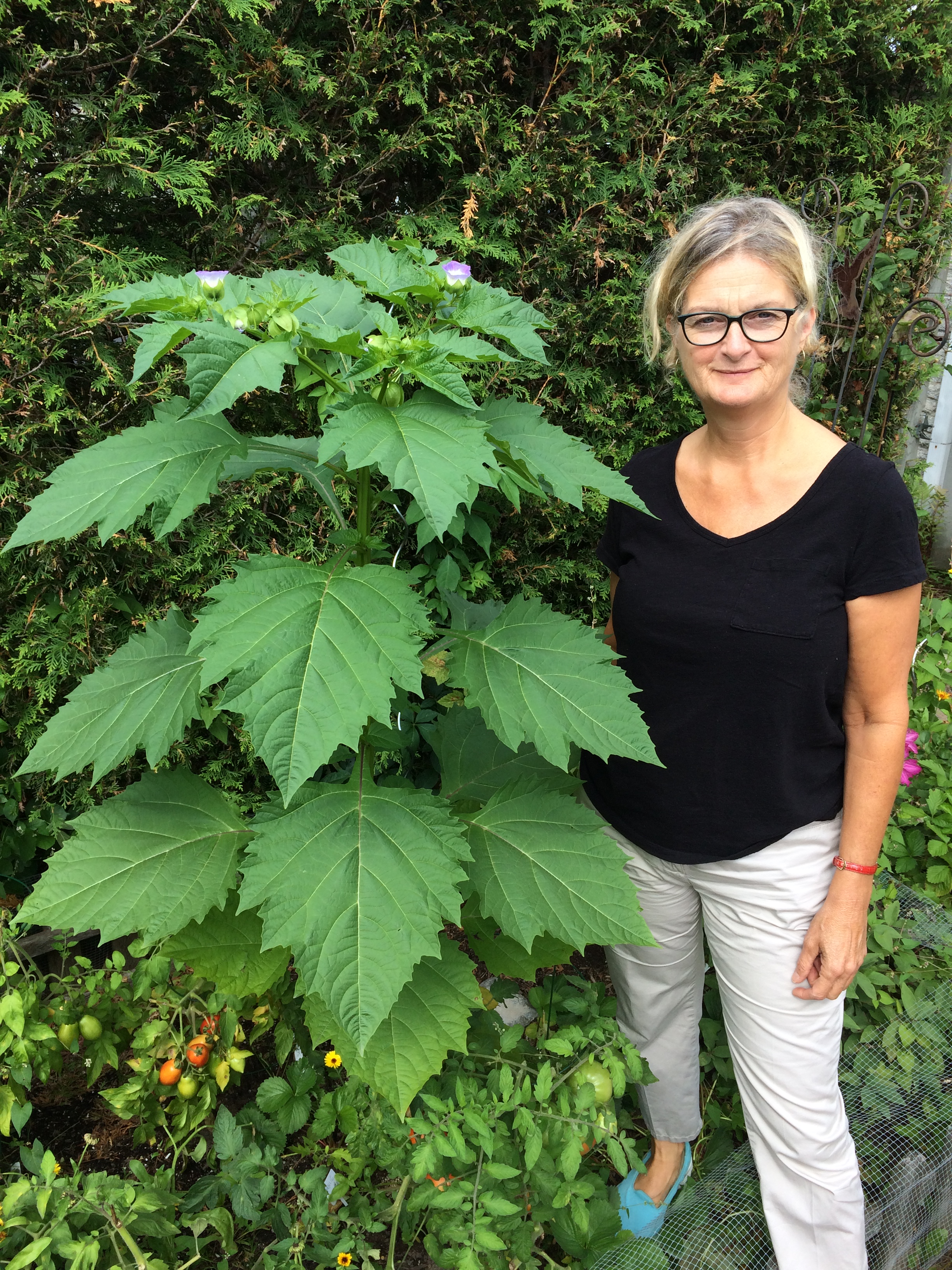 Question: Can you identify this beautiful plant? It appeared in my flower garden all on its own: I never planted it.

Answer: Yes, it’s a shoofly plant, also called apple of Peru (Nicandra physalodes). It’s rather a forgotten beauty, once a well-known garden annual, but one that seems to have fallen from favor. Certainly, I never see it in garden centers anymore. However, it has a rather weedy habit (although it’s easy enough to pull out) and seeds are readily carried from one spot to another by birds. In that way, it has “liberated” itself from human control and grows spontaneously as an introduced plant in fields and gardens pretty much all over the world.

Is it a weed? Sometimes! But it’s usual habit of appearing here and there rather than dominating the landscape means it’s rarely a huge problem.

The exact origin of the shoofly plant is, curiously enough, not fully known, but it is believed to be native to the Andean Cordillera in South America, possibly Peru. It’s obviously well-established as an introduced plant in North America and Europe, as I regularly receive letters and photos from readers wondering what it is.

Although it may be hard to believe that such a huge plant (it ranges from 3 to 8 feet [90 cm to 250 cm] high with leaves sometimes greater than 1 foot [30 cm] in length) is an annual, it does indeed start life over again each spring from a seed. It produces lavender purple cup-shaped flowers from June or July to September or October. The leaves are dark green with a deeply toothed margin. The musky odor of the flower is said to repel whiteflies and sometimes other insects, hence the name shoofly plant, but the reputation is certainly overstated, as I’ve seen colonies of whiteflies apparently thriving underneath a shoofly plant leaf.

After flowering, an inflated green to purple calyx forms, one that can be dried and used in floral arrangements. The calyx is similar to that of the Chinese lantern, Physalis alkekengi, and the ground cherry, P. pruinosa, two plants in the related genus Physalis. All three plants are in the Solanaceae family, but the shoofly plant has its a genus all to itself: Nicandra, named for the Greek poet Nicander of Colophone, who wrote poems about—oddly enough!—poisonous plants.

He would have loved his namesake, as, unlike the edible ground cherry, the fruit of the shoofly plant is poisonous, as are its leaves. Despite this toxicity, the seeds and leaves are consumed in some parts of the world and it also has medicinal uses. I suggest not consuming any part of it unless you know what you’re doing!

Note that shoofly pie is made with molasses and not from the shoofly plant!

How to Grow Your Own Shoofly Plant

The shoofly plant doesn’t always appear spontaneously just when and where you want it, but that’s all right, as its seeds are fairly widely available, notably in catalogs offering heritage flower seeds.

Oddly enough, the best time to sow shoofly plants is in the fall, because the seeds germinate best after a treatment at low temperatures and really love a winter outdoors. If not, try sowing it outdoors in early spring, when the soil is still cool. For an extra-large plant, start the seeds indoors inside 4–6 weeks before the last frost date. Sow them in peat pots so the fragile root system can be planted into the garden intact.

Sow without covering the seeds, as they need light to germinate. Grow the plant in a sunny or, at very least, partially shaded location in well-drained soil of just about any quality. Even very poor soils are fine. It looks great in a pot too … a very large pot!

The cultivar ‘Violacea’, with darker flowers and purple-tinged calyxes, is often seen not only in catalogs, but even appears spontaneously, as in many areas, that’s the variety that escaped from culture. The cultivar ‘Splash of Cream’, also offered, has yellow-dotted variegated foliage. I find its coloration very irregular, with most branches showing little to no color.

Here are some of the catalogs that offer shoofly plant seeds:

The shoofly plant: an oldie but goodie, certainly worth a 21st-century revival!

5 comments on “The Shoo-Fly Plant: The Most Beautiful Annual You Never Planted”