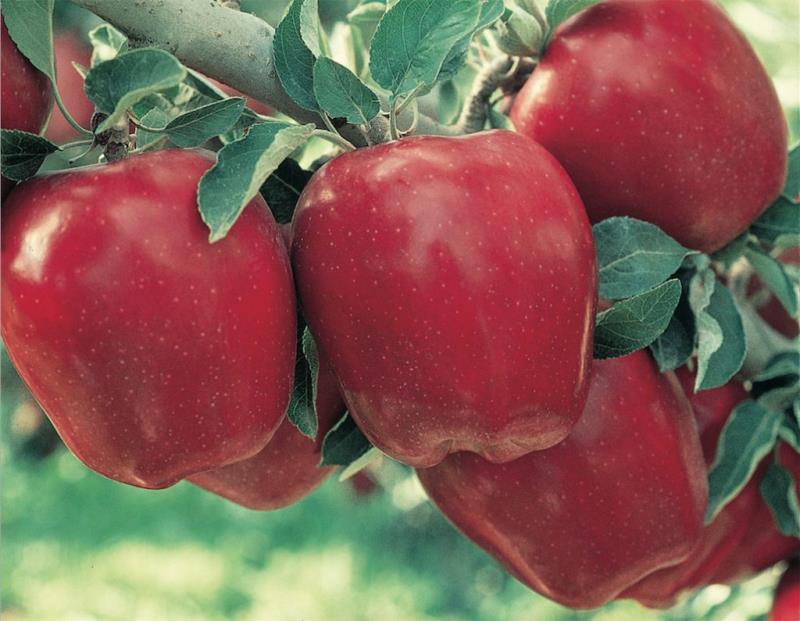 The ‘Red Delicious’ apple was for more than 50 years the best-selling apple in the United States, but its reign is now officially over. “Only” 51.7 million Red Delicious apples will be sold in the US in 2018, a decrease of 10.7% over last year, while ‘Gala’ apple sales will exceed 52.4 million, an increase of 5.9%.

Already, Americans have been buying fewer ‘Red Delicious’ for over a decade now and the bulk of this year’s production will now be sold abroad. On the other hand, growers just can’t produce enough of the rising star in the apple world, the ‘Gala’. Many ‘Gala’ apples are still imported annually to meet the need.

The basic problem is that ‘Red Delicious’ is not so delicious. It’s a very attractive apple, perfectly red, and its skin, thick and leathery, almost waxy, makes it an excellent apple for transportation and storage. But the taste? Not so extraordinary … at least, not in the form offered on the market.

History of a Not-So-Delicious Apple

The ‘Red Delicious’ type of apple was first found in Jesse Hiatt’s orchard in Peru, Iowa, in about 1870. He called it ‘Hawkeye’. He later sold the rights to Stark Nurseries who changed the name to ‘Stark Delicious’ and began propagating it. When the same nursery released a cultivar called ‘Golden Delicious’ (in fact, not a close relative of ‘Stark Delicious’, but a tree with a distinctly different genetic background) and realized this was confusing consumers, they again changed the name and began calling it ‘Red Delicious’ in 1914. Even so, the newly renamed ‘Red Delicious’ was not yet the perfectly red apple we know today, but rather red lightly marbled yellow, as per the original ‘Hawkeye’.

In 1923, New Jersey orchardist reported a bizarre situation. A branch on one of his ‘Red Delicious’ apples produced apples that turned red very early, before the fruit was fully ripe, while the other apples on the tree were still green. And the fruit was perfectly red, without the yellow marbling of the original. A representative of Stark Brothers Nursery paid $6,000 (a fortune at the time) for the branch bearing the mutation (for that’s what it was) and the nursery began to propagate the new ‘Red Delicious’ on a massive scale, convinced of its potential.

Less than twenty years after the new all-red ‘Red Delicious’ was launched, that is, by 1940, it had become the most popular apple in the United States.

Why? Not because consumers liked its taste, although it was eye-catchingly red, but because it was easy to produce, ship and maintain on store shelves. You see, it was possible to harvest the fruit when it was immature, but nevertheless completely red on the outside. Immature fruits, with their thicker skin, travel better than ripe fruits and are not as subject to bruising. Also, their shelf life is enormously prolonged: harvested at just the right stage, ‘Red Delicious’ apples still look great 9 months after the harvest, even 12 months when stored in a controlled atmosphere, a boon for growers!

On the other hand, although immature apples do sweeten somewhat after harvest, they are never as tasty as mature apples: they’re not as sweet, their skin is bitter and their texture becomes crumbly.

A fully ripe ‘Red Delicious’ harvested fresh from a tree is indeed delicious … but the supermarket ‘Red Delicious’, red outside, but “green” (immature) inside, is just barely palatable. Yet, for a long time it was widely available and inexpensive. Apple historian Tom Burford calls the ‘Red Delicious’ “the largest compost-maker in the country,” because consumers bought them, but then didn’t eat them: one third ended up in the trash. Typically, Mom would drop one in each lunch bag, but the kids would throw them away at school.

But ‘Red Delicious’ sales have been in decline now since the early 1990s. That’s when consumers began to show their willingness to pay more for better-tasting imported apples (including ‘Gala’ and ‘Fuji’). Soon American orchards were replacing the bland ‘Red Delicious’ with tastier varieties to win back their market. Now produced locally, ‘Gala’, ‘Fuji’, ‘Granny Smith’ and ‘Honeycrisp’ are presently, with ‘Red Delicious’, the five best-selling apples in the US, but if the trend continues—and it likely will—‘Red Delicious’ will soon drop off the list of popular apples entirely.

Elsewhere in the World

In Great Britain, ‘Red Delicious’ has never been popular, but the old favorite, ‘Cox’, has been replaced by the new favorite, ‘Gala’ (in the form of ‘Royal Gala’, a darker skinned sport of ‘Gala’). Other top sellers are ‘Braeburn’ (new) and ‘Russet’ (an old favorite).

‘Red Delicious’ is still commonly sold in Canada, but is rarely grown there and is usually imported from the United States. Canadians have always preferred the ‘Macintosh’ to ‘Red Delicious’ anyway, but the ‘Gala’ is now close behind the ‘Macintosh’ and even dominates in British Columbia while the ‘Cortland’ is popular everywhere and the ‘Honeycrisp’ is very trendy.

Australians like ‘Pink Lady’ and ‘Granny Smith’ (the latter developed there), but ‘Gala’ (‘Royal Gala’) is gaining fast.

Farewell, ‘Red Delicious’ … but with some 7,000 varieties of apple to choose from, I don’t think we’ll have a hard time finding a replacement!

5 comments on “The ‘Red Delicious’ Falls From Favor”