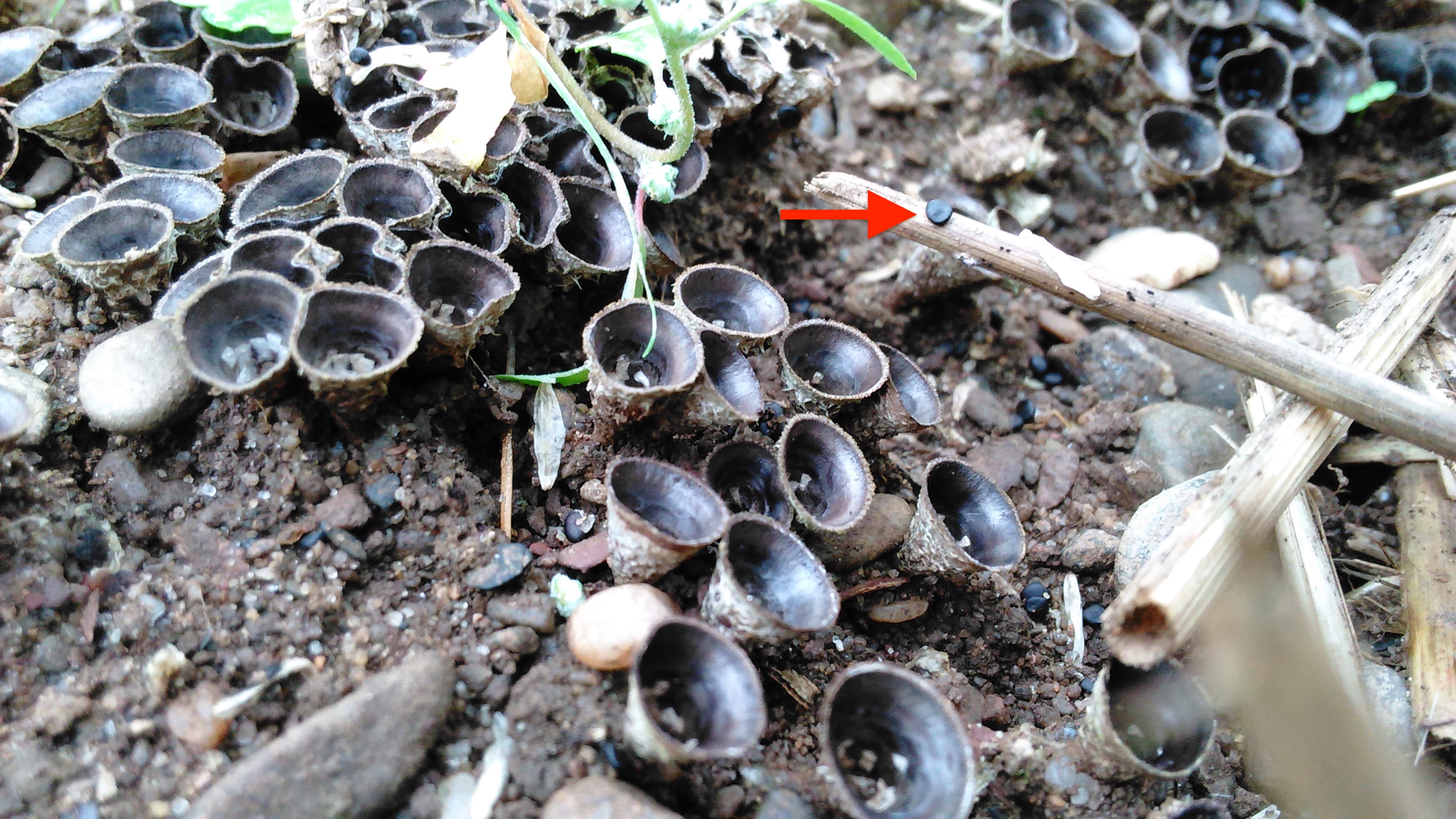 Question: Could you identify the small dark gray cones that have invaded the soil of my corn and bean patch? Inside, there are 4 to 5 black “seeds” that seem to disperse all around, since I find them stuck on foliage well off the ground.

Answer: They’re bird’s nest fungi, mushrooms of the family Nidulariaceae. Their name comes from their form: they look like a nest with eggs or stones inside. There are hundreds of species in five genera Crucibulum, Cyathus, Mycocalia, Nidula and Nidularia, and in one form or another, they are found all over the world.

When the fruiting body forms, it’s at first covered by a membrane that eventually tears open, revealing egg-shaped growths inside called peridioles. When drops of rain hit the nest at just the right angle, this launches the peridioles into the air where they can fall at up to 4 feet (1.2 m) from the nest. This habit gives the fungi their other common name: splash cups.

Many species have peridioles with a sticky thread that clings or even wraps around objects: normally plants, but even rocks, garden furniture, siding, etc. (Bird’s nest mushrooms should not be confused with artillery fungus, which also throws sticky dots onto nearby objects, but in much greater quantities and can seriously damage siding.)

When periodioles have settled on a surface, they dry out, releasing spores that germinate if they end up in a suitable medium, thus ensuring the fungus’s distribution.

The vast majority of bird’s nest fungi are saprophytes: that is, they live on dead organic matter, usually on wood or on wood residues, such as fallen branches, mulch, etc., but sometimes also dead leaves or animal dung. They’re harmless to living plants. By breaking down wood and other debris, they release minerals, enriching the soil in their vicinity, which is why many plants grow better when there are bird’s nest fungi nearby. They are mostly often seen in late summer and fall.

Bird’s nest mushrooms are considered harmless to both plants and animals. Rake the ground if you want to great rid of them and keep the area drier in the future to prevent them from coming back.

Or just leave them alone and invite friends to come and share your joy at finding these fascinating wonders of nature!

2 comments on “Tiny Bird’s Nests in Your Garden”