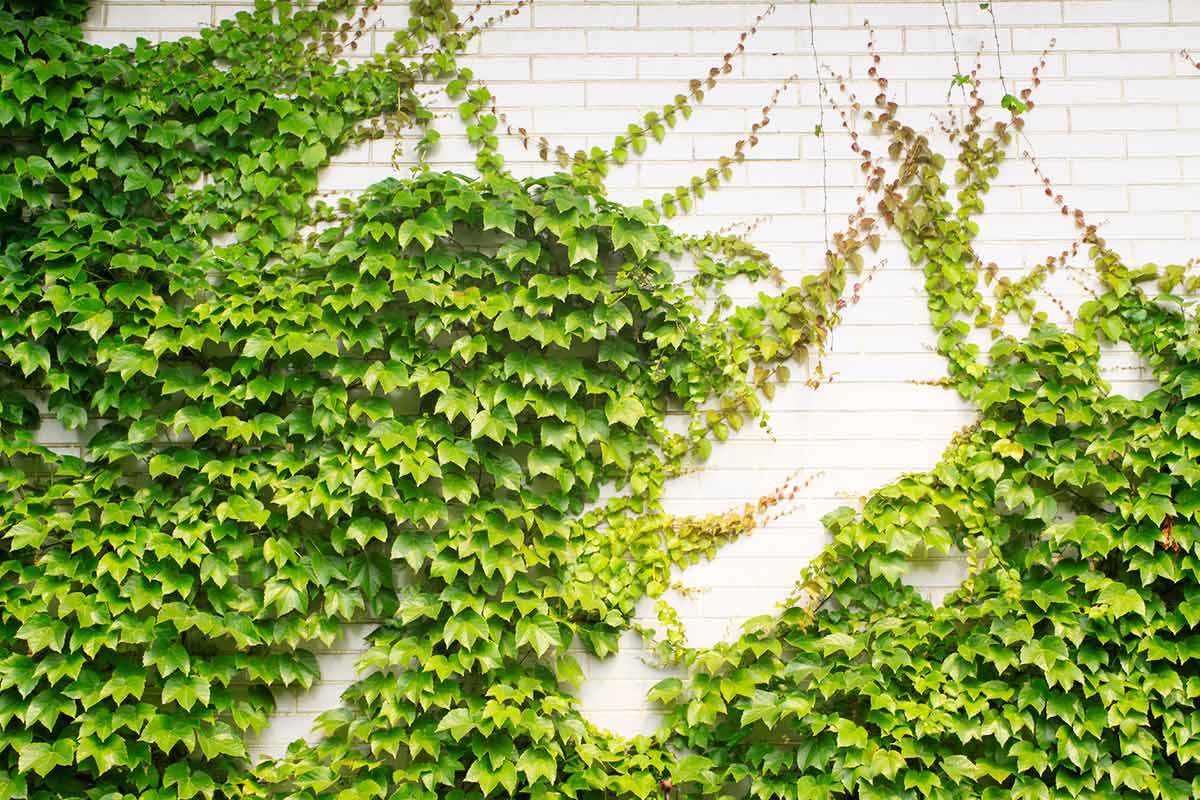 Boston ivy (Parthenocissus tricuspidata) on a wall is a common enough sight… but does it harm the wall in any way? Source: icastle.com

Some vines, such as Virginia creeper (Parthenocissus quinquefolia, zone 2), Boston ivy (P. tricuspidata, zone 5), English ivy (Hedera helix, zone 7), wintercreeper (Euonymus fortunei, zone 6) and climbing hydrangea (Hydrangea anomala petiolaris, zone 5), are self-clinging: they climb via adhesive pads or aerial roots, depending on the species. Other vines have twining stems or tendrils and need a trellis to wrap around, but self-clinging vines will attach to almost any surface, even flat ones such as a house wall.

However, old gardening books long advised against allowing climbing plants to grow on houses under the pretext that they would “root into the mortar” and pull it out. How true is that?

Today we know self-clinging vines don’t root into mortar. In fact, adhesive pads don’t root into anything: they simply cling to the outer surface of the surface they climb. This is also true of aerial roots: old beliefs to the contrary, aerial roots of temperate zone climbing plants are a specialized type of root, nothing like the roots that grow in soil: they never turn into true roots that could “dig into the mortar”. Like adhesive pads, they always remain strictly limited to the outer surface.

It is interesting to note that, even as “experts” were advising against using climbing plants on buildings, there were always plenty of examples of them being used that way. And it was abundantly clear that walls covered with climbing plants actually lasted longer – much longer, such as hundreds of years longer in some cases – than walls exposed to the elements.

We now know that, in most cases, climbing plants are beneficial to structures. Yes, they should be trimmed back if they start to invade windows or climb onto roofs, but they protect walls from what really does damage them: sunlight (notably ultraviolet rays), rain, air pollution and temperature contrasts. One Oxford University study calls self-clinging climbers a “thermal shield.”

Of course, the type of wall is a factor. You should test the mortar on stone or brick walls to make sure it is solid before letting climbing plants grow on it. The age-old trick is to run a house key over the mortar and if it doesn’t crumble, all is well. It likely won’t crumble if your house was built since the 1930s, as modern mortars are much more durable than older types.

In the case of walls made of wood, the answer is not as clear. Initially, vines protect the wood and make paint last for decades, much more than paint on walls exposed to the elements. On the other hand, when paint peels or fades, it is impossible to repaint a wall covered with plants. So, in the very, very long term, probably not during your lifetime, it may be necessary to remove the vines temporarily so the wall can be repainted. Then you can let it grow back.

You’ll also hear that you shouldn’t grow vines on stucco walls, that they can pull off chunks of stucco when you remove them, but actually, no, they won’t. At any rate, why would you remove them? After all, they’re making the wall last longer. So if your goal is to permanently cover a stucco wall with vines, go right ahead!

When it comes to vinyl or aluminum siding, the jury is still out. These products are fairly new (they only began being used after the Second World War) and theory has it that the weight of the vines could pull them off the wall. There are many cases where siding has been covered with vines for decades now and no damage has so far been reported. That’s probably because vines lignify (harden) over over time and actually end up supporting the wall and its coverings. It turns out most older types of siding need to be replaced after 20 or 30 years and vines may well help them last twice as long. No one knows how long newer types of siding will last, with or without vines. Some are now offered with a lifetime warranty… but that means little, as the average installer doesn’t expect you to remember who installed the siding if there is a problem 40 years later, much less keep proof of the installation.

My 70 year old house is covered in wood. When we moved in 24 years ago, we repainted, then I planted Boston ivy (Parthenocissus veitchii) on two sides of the house. Those sides have required no care other than an occasional trimming around the edges of the windows and under the eaves. The other two sides have been repainted twice now. I honestly believe that my vine-covered walls are good for at least a century… and if they do need to be removed for repainting after that, well, that will be someone else’s business!