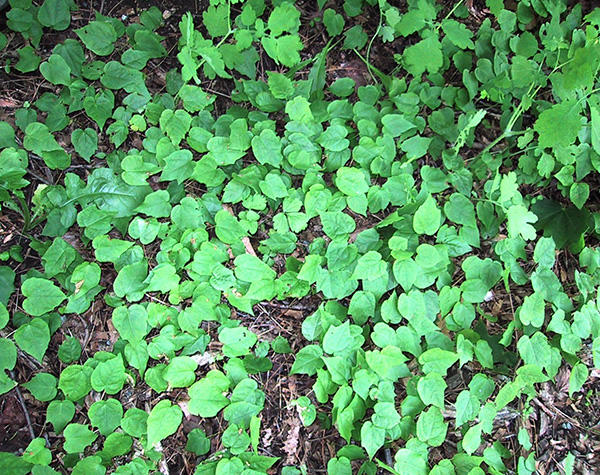 The Norway maple (Acer platanoides) produces so many seedlings it can easily become a garden pest. Source: www.massaudubon.org.

All plants reproduce. If they didn’t, they’d go extinct! But most do so modestly, producing a plant here and there, just enough to maintain their population. Others, though, do so profusely, becoming an annoyance to gardeners and spreading into the wild far from where they are native. Most such plants are simply called weeds and they tend to be annuals, perennials or biennials. However, there are also trees and shrubs that overdo it and can become invasive due to aggressive self-sowing as well.

Of course, there are different ways in which a plant can become invasive. Through suckers, for example. Think of false spirea (Sorbaria sorbifolia) or staghorn sumac (Rhus typhina). They certainly get around, but since they sprout from wandering roots, they only tend to be invasive on a very local scale. Woody plants that spread by seed can get much farther. What with birds, squirrels and wind to carry them greater distances, they can really get around.

I, for example, have no Norway maple on my property, nor do any of my immediate neighbors, but there are several further down the street and as a result, I find hundreds of Norway maple seedlings in my gardens every year.

The Ones That Overdo It

What follows is a list of trees and shrubs that have the reputation of being invasive through their seeds, but…

Not all plants on the list will be invasive under all conditions. They’ll only cause problems when the local environment is appropriate to their needs. For example, tamarisk or saltcedar (Tamarix ramosissima) is very invasive in drier climates, but not a problem at all in more humid ones, while Japanese barberry (Berberis thunbergii), which can be terribly invasive in moderate climates, doesn’t produce fertile seed in colder ones and thus is not a problem there.

Also, there are sterile forms of many of the trees and shrubs listed here, such as Frangula alnus ‘Ron Williams’ Fine Line, a sterile form of the otherwise invasive alder buckthorn (F. alnus), while new sterile varieties of Japanese barberry (Berberis thunbergii) and winged euonymus (Euonymus alatus) are either under development or being introduced. If there’s a tree or shrub you like, but it has invasive tendencies, you can often find a sterile or nearly sterile form you can use with impunity.

Fortunately, using a good mulch will prevent most tree and shrub seeds from germinating. They simply can’t germinate through a thick mulch. That said, some trees—especially nut trees—are among the few plants whose extra robust seeds really can germinate through a mulch. Those that are invasive even under 2 inches (5 cm) of mulch are marked with an asterisk (*).

I’m not saying do not plant the plants listed here—some are great garden plants!—but forewarned is forearmed!

0 comments on “Trees and Shrubs That Self-sow Excessively”