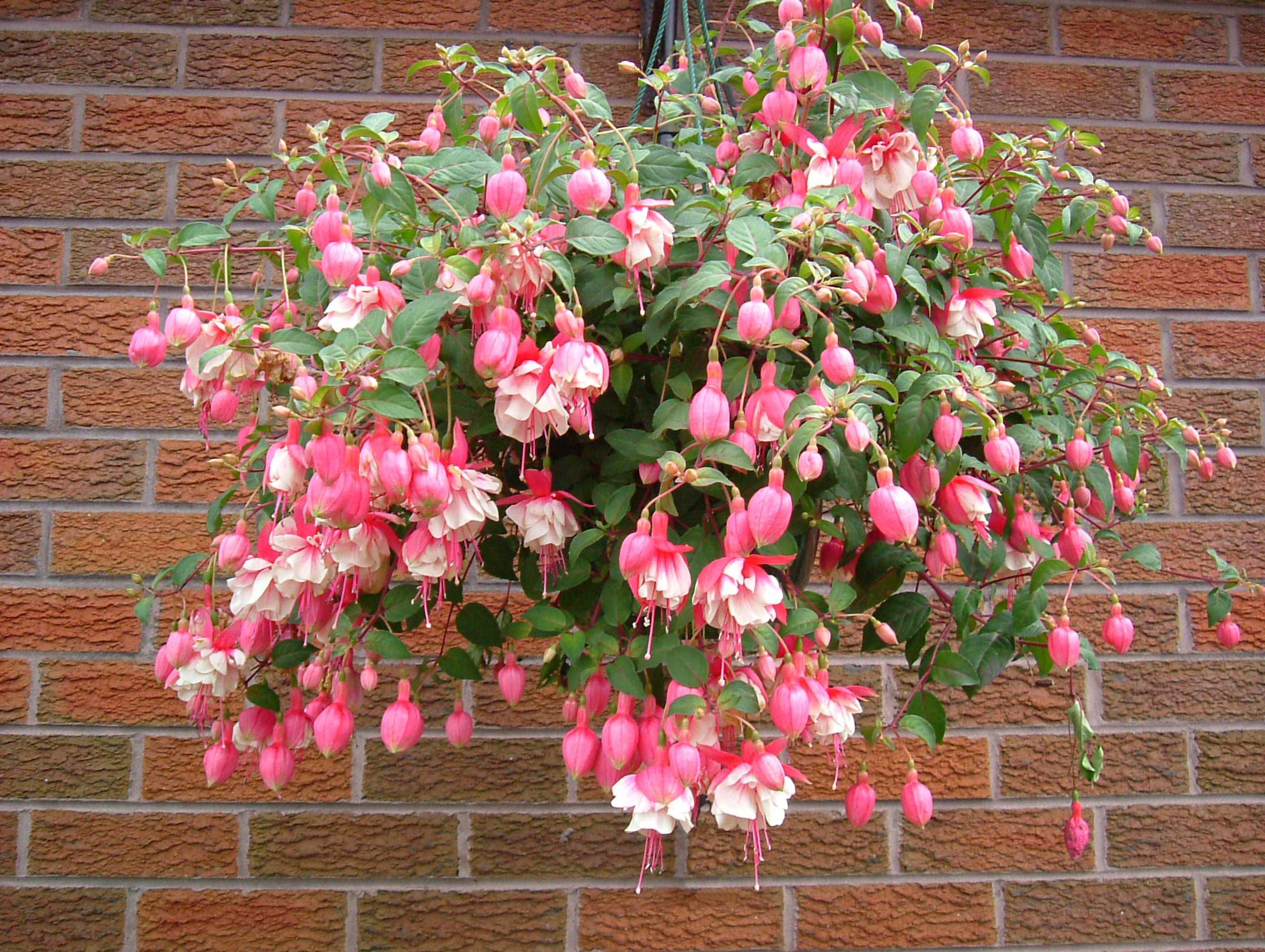 A hybrid fuchsia (Fuchsia x hybrida) can often bloom from late spring to late fall, but will need some sort of protection to survive the winter in temperate zones. Source: Lori Smoot, pinterest.ca

The genus Fuchsia, named for the German botanist Leonhart Fuchs (1501–1566), contains more than 100 species, many of which are tropical and unable to tolerate the slightest bit of cold, but the most widely cultivated variety, the hybrid fuchsia (Fuchsia x hybrida), of which there are more than 8,000 cultivars, is hardier. It’s a subtropical plant and prefers a cool fall and winter. In fact, most cultivars will even tolerate a light frost without much harm.

There is even a “hardy fuchsia” (F. magellanica and its hybrids), a shrub that survives in zone 7 if it is well mulched (otherwise, zone 8) and can therefore grow outdoors in much of Europe, as well as in milder regions of North America, even as far north as Vancouver, Canada.

That said, it’s pretty much the only fuchsia that is hardy enough to overwinter outdoors in temperate climates. You need to either treat the vast majority of fuchsias as annuals, letting them freeze in the fall (which is, in fact, what most gardeners do) or find a way to overwinter them safely away from hard frost.

I have friends in Europe (zone 8) who overwinter their hybrid fuchsias by removing all their leaves and burying them in a trench in the garden, then covering them a thick mulch. (I’ve always felt that sounded like a lot of work!) At any rate, it won’t work for a lot of gardeners in temperate zones. In zone 7 and colder (and I live in the frigid zone 3!), the ground is likely to freeze deeply in spite of the mulch and that would kill the trenched fuchsias.

Fuchsias can also be overwintered indoors as houseplants, placed in front of a very sunny window, but that brings its share of problems. I only do this with honeysuckle fuchsia (F. triphylla) and its cultivars, like the classic ‘Gartenmeister Bonstedt’. This is a more tropical species than the hybrid fuchsia, adapting perfectly well to the warm temperatures (65 to 75 ° F/18 to 24 ° C) maintained in most homes over the winter.

Hybrid fuchsias (F. x hybrida) don’t make such great houseplants. They prefer a much cooler winter (40 to 50 ° F/4 to 10 ° C) and lose a lot of leaves when you bring them indoors in the fall, producing weak, etiolated growth over the winter. They just don’t do well under the combination of warm indoor temperatures and poor light (the sun is very weak during the late fall and winter). Also, they have a hard time tolerating the dry air that prevails in our homes over the winter.

If you’re still considering bringing hybrid fuchsia indoors over the winter, at least be very careful to treat the leaves with a suitable insecticide when you bring them in. Whiteflies just love fuchsias and will follow them indoors. You may not notice any right away, as whiteflies go into diapause (dormancy) in the fall, but when they wake up in March and start to proliferate massively, you’ll wonder why you ever thought it was a good idea to bring a fuchsia indoors!

A third option is to take cuttings rather than bring in adult plants. You should still swish the cuttings in soapy water (insecticidal soap is best) as you bring them in so as to kill any whiteflies that might be hiding on the leaves. Then, as you prepare your cuttings (read Rooting Cuttings Step by Step), apply a rooting hormone and root them in a pot of moist potting soil. The resulting plantlets seem to tolerate the warm temperatures of our homes better than adult plants. Nevertheless, the occasional pruning to reduce etiolation and stimulate branching might well be helpful.

This is the method of choice for most gardeners. You need a frost-free location where temperatures remain between 40 and 50 ° F (4 and 10 ° C) through the winter. The spot can be in the dark or receive light: that matters little. You’ll often find such conditions in a basement, a root cellar, a slightly heated garage, a solarium or a covered veranda (lanai). The air can be either humid or dry: it doesn’t matter when the plant is dormant.

When frost threatens (I actually prefer my fuchsias to undergo a touch of frost: it seems to shock them into a deeper dormancy), bring the plants indoors. Prune back the stems by about a third. Clear the plants of any remaining leaves (they will have lost a lot after undergoing cold autumn temperatures). By removing all the leaves, you can be sure you don’t bring any whiteflies indoors, as they overwinter on the undersides of leaves.

Maintenance during dormancy is minimal: simply water enough so that the soil does not dry up completely. For that purpose, you may only need to water about once a month.

At the end of March or in April, move the plants indoors to a windowsill or set them in a heated greenhouse, ideally in full sun. Begin to water more assiduously. Soon you’ll see new growth appear. As new leaves grow and the plant fills in, its watering needs will increase. Shortly, you’ll be watering your fuchsias just as much as any other houseplant. When growth picks up, you can also start fertilizing them again: use the fertilizer of your choice at one quarter the recommended rate.

With the treatment described, your fuchsias should be in full growth and even starting to bloom just in time for their summer season. Put them back outdoors, preferably in partial shade, keep watering and fertilizing, and just watch them bloom their heads off!