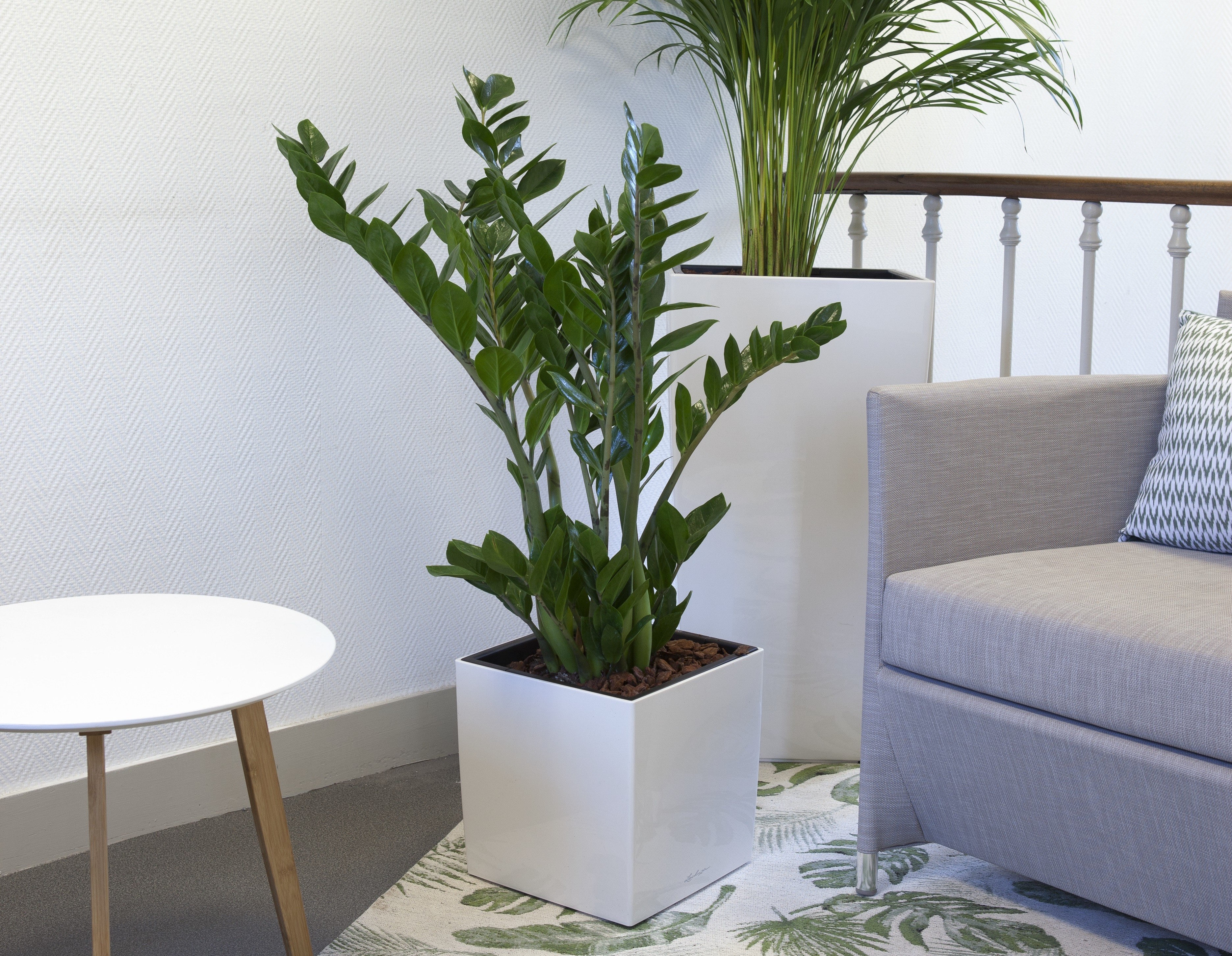 The ZZ plant may be a fairly new introduction, but it’s already seen as a “classic houseplant.” Source: fleurenville.com

The ZZ or zeezee plant (Zamioculcas zamiifolia), also called aroid palm, has been around long enough to have become a staple houseplant for indoor decors, but that wasn’t always the case. Although discovered back in the early 19th century (it was first described botanically in 1829) in eastern Africa, its potential as a houseplant went unknown for over 150 years. Dutch horticulturists, seeing it used as an ornamental plant outdoors in tropical Asia, tried it indoors and the rest is history. By 1996, it was being mass produced. By 2000, it was essentially available all over the world.

The ZZ plant is an aberrant aroid.

The aroid or philodendron family is best known to most gardeners for its climbing foliage plants, including not only the ever-popular heartleaf philodendron (Philodendron hederaceum, formerly P. scandens, P. cordatum and P. oxycardium), but such other indoor climbers as the pothos or devil’s ivy (Epipremnum aureum), the Swiss cheese plant (Monstera deliciosa) and the syngonium or arrowhead vine (Syngonium podophyllum). Of course, the vast family does contain a lot of other plants, including such tuberous tropicals as caladiums (Caladium hortulanum), taro (Colocasia esculentum) and any other plant commonly called an elephant’s ear, a few classic table-top houseplants peace lily (Spathiphyllum spp.) and Chinese evergreen (Aglaonema spp.) and even a few very hardy perennials for the outdoor garden, like the Jack-in-the-pulpit (Arisaema triphyllum), native to cool to cold climates in North America.

However, the ZZ plant looks like no other aroid. With its clump of pinnate leaves arching outwards, you’d be more likely to mistake it for a palm or a cycad, possibly even a fern. That’s reflected in its botanical name: Zamioculcas zamiifolia. It’s named after the genus Zamia, short palmlike cycads from the New World which it certainly does resemble.

It is so aberrant that it has no truly close relatives: it is, in fact, monotypic, the only plant in the genus Zamioculcas. It even has its own subfamily that it shares with no other aroid, the Zamioculcadoideae.

Underneath the cycad-like exterior is a tuberous plant, growing from a fat, potato-like rhizome hidden or mostly hidden under the soil. Extremely thick, succulent petioles arise from the rhizome bearing about 6 to 8 pairs of very shiny, dark green leaflets. Such pinnate leaves are typical of palms, cycads and ferns, but not other aroids.

Small, typically aroid inflorescences, with a greenish to bronze spathe (leaf-like bract) from which emerges a cream to brown colored spadix (flower spike), appear on very short stems at the base of the plant, often so well hidden you don’t even notice them. Certainly, they contribute little to the plant’s appearance.

The ZZ plant is extremely tolerant of indoor conditions (it also makes an easy-to-grow shade plant for the tropics, but that’s another story). It will grow just about anywhere, from full sun to deep shade, and seems to thrive in neglect. Even so, you’ll get better results if you “treat it kindly,” and that would include giving it good light with some direct sun each day and avoiding spots in full sun during the hotter months of the year.

Of course, while it will “hold” for months in a dark corner that receives no sunlight at all, that will eventually kill it: it’s a living plant after all and all green plants need at least some light!

Rumor has it that the ZZ plant never needs to be watered. That’s nonsense, of course: all living plants need water!

This plant is essentially a succulent (again, aberrant in aroids), native to forests and savannahs where severe drought can occur. As a result, it prefers fairly arid conditions to the humid jungle-like environment most other aroids favor. That helps make it easy to grow, as it will tolerate considerable neglect. Even so, it does best when watered regularly, as soon as the soil is dry to the touch. And when you do water, do so thoroughly, completely humidifying the root ball.

Overwatering can lead to rot, so be sure the growing mix is almost dry before watering again. Sink your index in the substrate to the second joint: if it’s still moist, it’s not yet time to water!

It will tolerate so much neglect you can actually not water it at all for months on end. That will eventually push it into dormancy, though, a state from which it will (slowly) recover when you start watering again. I had a friend whose ZZ plant accidentally got stored in a box for over 2 years: therefore, with no light or water. It was leafless by then, of course, but when water was applied again, it started to regrow, albeit several months later.

This plant’s well-deserved “tough-as-nails” reputation only applies if you keep it fairly warm. It is perfectly happy at normal indoor temperatures, that is, between 65° and 80 °F (18 °C and 26 °C), but does not like cool temperatures and can die if exposed to temperatures below 60 °F (15 °C) for any extended period. If you put yours outside for the summer, do make sure you bring it back inside early.

The ZZ plant is certainly not a heavy feeder and will probably do fine even if you never fertilize it, but to maintain good growth, a regular fertilizer regime at ⅛ to ¼ of the recommended rate, applied during its spring through early fall growing season, is best. You can use the fertilizer of your choice.

Finally, repot after a few years or when the plant outgrows its pot.

Mature plants can be divided, although they may take 5 years or more to reach a size where you’d be comfortable trying. Study at your plant and if you can see it’s composed of two or three distinct clumps, you can unpot it, separate the clumps by cutting between them with a sharp knife and repot them individually.

The leaflets are actually quite fragile and easily knocked off: always a good excuse to try a bit of multiplication. Just insert the lower end of the leaflet into a moist growing medium and water as needed so it doesn’t become totally dry … and that means not very often. Perhaps once a month or so.

An underground tuber-like growth forms first and, then roots and finally, a first leaf. Sometimes the green leaflet has time to turn yellow, then brown before there is any visible sign of life above ground, but don’t give up: there is probably a tuber at the base of the leaf and, if so, a new plant will form, although that can take a year, sometimes even two … and no, that is not an exaggeration!

You can also use an entire leaf as a cutting, but you’ll still just get one plant at the end.

As mentioned, rot is the most likely cause of any ZZ plant death. It usually sets in when the plant is left soaking in water for long periods. Remember, with this plant, water only when the potting mix is truly dry to the touch.

Mealybugs and scale insects just love the ZZ plant and are hard to control. I once tried putting a scale-infested plant into complete dormancy, forcing it to lose all its leaves. Then I dug up and thoroughly cleaned the rhizomes. When it grew back many months later, the scale insects came back too!

Try removing any visible insects with a soft, soapy cloth, then spray repeatedly with isopropyl alcohol (rubbing alcohol) to, hopefully, kill any nymphs. If that doesn’t work, toss the plant and only use the pot again after a truly thorough cleaning.

The ZZ plant is an aroid, all of which are usually considered poisonous because they produce calcium oxalate, which can cause painful irritations if ingested. For years, the ZZ plant was thus deemed “guilty by association” and even listed by many sources as highly toxic.

However, recent studies suggest that the ZZ plant is considerably less toxic than most other aroids and in fact, possibly not toxic at all.

While waiting for further studies to be done, it would still be wise to keep this plant out of reach of children and pets.

Recently, a few cultivars have appeared, none widely available at the moment.

There is also a variegated ZZ plant out there (I saw one specimen in the Berlin Botanical Garden and it was gorgeous!), but it’s outrageously expensive.

The ZZ plant: original and easy to the point of being nearly unkillable. Give one soon as a gift to some poor brown thumber who desperately needs a bit of a confidence boost in his or her gardening abilities!