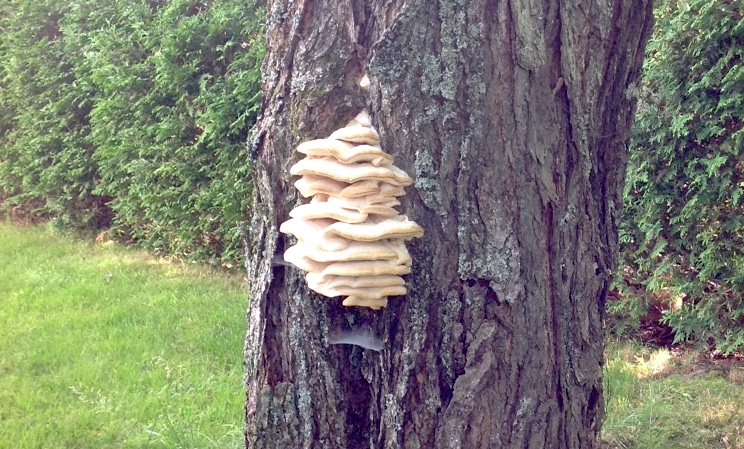 Question: My mature tree is infested with strange growths. What should I do?

Answer:What you’re seeing is a fungus known as a bracket fungus or shelf fungus. Scientifically, it’s called a polypore. It’s one of the most common mushrooms on the planet, with at least a thousand species. They are characterized by a fruiting body (the part that is readily visible and produces spores) in the form of a shelf, often called a conk. Bracket fungus fruiting bodies are often tough and woody and can live for years, although some are annual. If you examine the underside of the bracket, you’ll usually find many tubular pores, hence the name polypore (multiple pores).

Most bracket fungi found on living trees only live on and decay the heartwood; they do not infect and kill the living parts of the tree. You’ll also find bracket fungi on stumps, logs and fallen branches where they continue their vital role of decomposing wood.

When you find bracket fungi on a tree, the mushroom has already been at work inside the trunk for a long time, usually years. Its vegetative part, called the mycelium, is made up of filaments (hyphae) that run through the heartwood of the tree, digesting it gradually, leading it to rot and, eventually, disappear. Your tree will then become hollow, at least in part. True enough, some trees do succeed in sealing off the decomposing sector, thus limiting to the spread of the mushroom, but you can usually assume the fungus has already spread widely through the heartwood by the time you notice its presence.

There is nothing to do to stop the process. The mycelium is essentially the real fungus and it’s out of reach, in the heart of the tree. There is no treatment to control it. The visible part of the mushroom, the fruiting body, only serves for reproduction. Even if you remove it, the decomposition will continue inside … and moreover, new brackets will grow back.

Do You Need to React?

Not necessarily. The heartwood of a tree is always dead anyway. There is only the bark and a thin layer of whiter, softer wood under the bark (sapwood) that is actually alive. Although heartwood is dead, it remains useful because it helps the tree to better withstand the wind, but its decline or disappearance does not always have unfortunate consequences: you often see trees infested with bracket fungi and even completely hollow that are still very solid. Often, they continue to live for 20, 40 or even 60 years after the discovery of the first brackets.

To check whether your tree is still structurally sound, you should consult an experienced arborist. If he thinks it is weak and that it may do damage when it falls, have the tree removed. If not, let it continue its life. After all, not only might it still last years as an ornamental element on your property, but hollow trees and even dead ones are highly useful to wildlife.

2 comments on “What to Do About Bracket Fungi?”