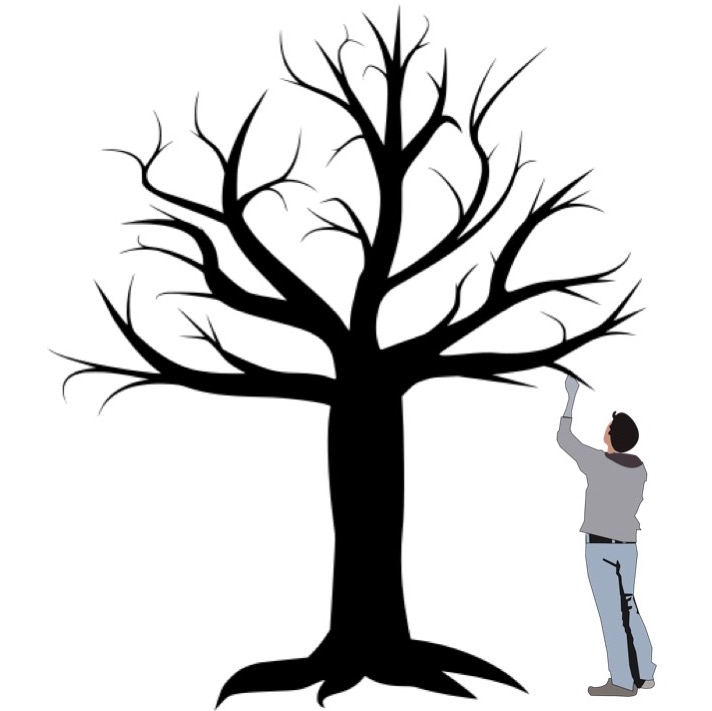 When leaves have mostly fallen from your trees, it’s time to give them a good going over. Source: A melbournechapter.net & svgsilh.com, montage: laidbackgardener.blog

The disappearance of leaves from deciduous trees in the fall is often seen by home gardeners as the end of the horticultural season, but it’s also a golden opportunity to study your trees’ condition. Bare of foliage, their entire structure is visible, allowing you to see any flaws. So, a quick annual tree inspection tour, just to make sure everything is fine, is always a good thing.

The most obvious problems usually have to do with weak, damaged or dead branches. Some branches may have snapped or bent and need removing. Others rub on neighboring branches, weakening and, eventually, killing both. Ideally, one or the other really ought to be removed.

Sometimes, you see clusters of weak branches all growing from about the same point, a probably as the result of an earlier poor choice in pruning. You’ll have to prune off all but one branch (probably the healthiest, straightest one) to give it a chance.

You can also remove any suckers (upright branches with no secondary stems) if you see any. Or there may have a very vigorous upright branch that is threatening to become a second trunk and that usually leads to a weak fork that can tear off and seriously damage the tree. So remove that as well.

In all these cases, the solution is to do a little bit of pruning.

You can do the pruning yourself if the branches are near enough to the ground for you to be able to reach them, at least with a pole pruner. (Obviously, any time you remove a branch higher than your head, you should be wearing a safety helmet.) For out-of-reach or oversized branches, it’s better to have a certified arborist do the job. Avoid fly-by-night tree trimmers who often damage trees rather than helping them.

Also, over time, the lower branches of a tree sometimes start get in your way. Since you don’t want anyone to bump their head when walking under the tree, it is often better to “limb it up” (also called “raising the crown”) by removing the problematic lower branches and that’s something you can do yourself.

To be completely honest, the time of year when you prune really doesn’t make a lot of difference. Yes, many experts say late winter or very early spring is the best time, while late fall/early winter is the second-best choice. In fact, the easiest thing to do is simply to prune when you first see the problem, before it gets any worse.

When you simply want to shorten a branch for whatever reason, just cut it off slightly beyond a secondary branch pointing in the desired direction. The latter will take over and replace the original one, thus preserving the tree’s natural symmetry.

Removing a branch entirely, right back to the trunk, is a different situation. Doubly so if it’s a major branch. If you simply saw it off from above, the branch will likely tear loose as you near the end, pulling off a strip of bark as it falls, thus damaging the tree’s structure. Fortunately, there’s an easy way around this.

First cut a notch under the branch, about 1 foot (30 cm) from the trunk and about ¼ to ⅓ of the way through. Then change position. Now saw from the top about 2 to 3 inches (5 to 7 cm) beyond the first cut until the branch breaks right off. It will now do so away from the trunk, thus avoiding any damage to it.

The final cut is the most important one, as you have to remove the stub. Cut as close to the trunk as possible, but without damaging the branch collar, the swollen bump seen at the base of the branch, because it’s from the collar that the new cells designed to cover the wound with fresh bark will form.

Finally, no, there is no need to cover the wound with pruning paint. It’s actually bad for the tree. Read Garden Myth: A Tree Wound Requires a Coat of Paint to understand why.

Bare Tree Leads to Other Discoveries

You may have other surprises when the leaves fall.

Often, you’ll find a bird’s nest, sometimes only a short distance from your front door, you never noticed in the summer, but that is visible now that the leaves have fallen. It will be empty in the fall and winter.

Or maybe you’ll discover a squirrel’s nest, which usually looks like a ball of dead leaves high up in the tree. In this case, the squirrel is likely still inside, as it’s a winter nest. You’ll discover that squirrels don’t actually hibernate. Although they spend much of the winter sleeping, they still come out from time to time to look for the nuts they buried in various hiding places earlier in the fall.

The other nest you’re likely to notice, looking like a greyish round ball in the branches, is a wasp nest. No need to panic: by mid-fall, the original queen and her workers will already be dead. The only survivor of the whole colony is the new queen and she’ll have left the nest, burying herself in the ground somewhere. She’ll wake up again in the spring and start building a new nest in another location. So, since the old nest is empty, if you want to recover it as a decoration, go for it! Otherwise, the nest will simply disintegrate over time.

Signs of Disease and Insects

So much for pleasant discoveries. Others are not so encouraging.

Probably the most disagreeable discovery you make when a tree is free of leaves is black knot disease (Dibotryon morbosum, syn. Apiosporina morbosa). This disease of plums and cherries (and occasionally other stone fruits) attacks the tree’s branches: you’ll discover an elongated black mass covering part of a branch. Black knot acts much like a cancer, cutting off the flow of sap to the affected limb and eventually causing its death even as it spreads to other branches. Sadly, once you discover black knot in a tree, it’s probably doomed: at most you can extend the tree’s life by removing the nodules. Read The Cancer of Plums and Cherries to learn how pruning can be of some help.

Whether you decided to prune or not, I suggest you plant a replacement tree (and not a cherry or a plum!) in the spring. When your tree finally does die, its replacement will have already reached a decent size.

You may see other odd growths on the trunk and branches. Sometimes they’re harmless, like lichens and moss, sometimes they are serious diseases, such as crown gall disease (Agrobacterium tumefaciens), and sometimes the growths are caused by insects. Tiny bumps on the bark, for example, may well be scale insects.

Whatever causes the growths, you’ll have to identify the problem before appropriate treatment can be found.

Take your inspection tour on a beautiful late fall/early winter day, when you feel like taking a bit of a stroll outdoors anyway. And remember, this annual checkup is not only free, but often helps prevent very serious problems in years to come.

4 comments on “Time for a Tree Inspection”