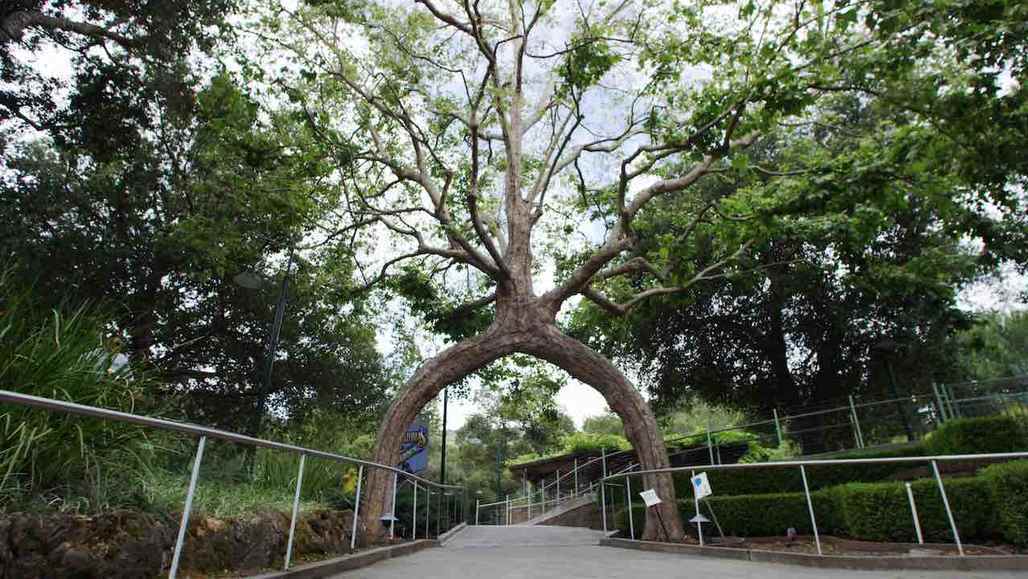 You’ve probably never seen anything like The Tree Circus, a collection of artistically grafted trees originally produced by Axel Erlandson (1884–1964), a Swedish American farmer who shaped trees as a hobby. He had noticed that when two branches rubbed together in his hedge, they would sometimes inosculate (self-graft) and decided to experiment.

Starting in 1925, he began to graft trees together in various shapes on his farm in Hilmar, California. He drew the design on paper first, then pruned, bent and grafted the trees as needed.

He never revealed his techniques, considering them trade secrets. If anyone asked him how he got his trees to grow like that, he insisted it was done by talking to them!

From Hobby to Tourist Attraction

For 20 years, he worked on his own with only his family and a few friends really knowing about his pastime. But eventually he realized it might be possible to show his trees off to the public and make some money from his hobby.

His farm was too far off the tourist circuit, so he bought a parcel of land near the main road in the Santa Clara valley and starting transplanting his best trees there, opening The Tree Circus in 1947. It was featured 12 times in the Ripley’s Believe It or Not! newspaper column and also in other publications, which helped stimulate some interest, but the enterprise never had any real success, especially when a new highway directed traffic well away from the garden.

A year before his death in 1964, Erlandson sold the property for $12,000 and a new tourist attraction called The Lost World, with life-sized models of dinosaurs, was created, with only modest success.

Eventually it closed too. The trees were neglected and began to decline. By 1977, there were only 40 of the original 70 tree sculptures left and some were in very bad shape.

The trees were actually scheduled to be bulldozed in 1977 to make room for a hotel development, but were saved at the last minute by the Friends of Scotts Valley Tree Circus, formed specifically for that purpose by local architect and activist, Mark Primack. Although the group never succeeded in having the trees declared a historical or a cultural resource as they intended, at least they delayed the development long enough that the project was abandoned and they also helped take care of the remaining trees.

In 1985, a new home was found for the remaining trees in Gilroy, California, about 40 miles (65 km) away thanks to Michael and Claudia Bonfante who were at the time owners of a chain of supermarkets, Nob Hill Foods. 24 of the trees were therefore moved to a new park. For a number of years, it was used as a recreational facility for employees of Nob Hill Foods and also as a tree nursery under the name Tree Haven.

After 25 years of effort, the Bonafontes finally completed what was now a nature-themed amusement park and opened it under the name Bonfante Gardens in 2001. It featured not only Erlandson’s trees, but numerous rides and activities for children. However, financial success still proved elusive and Bonfante Gardens changed management several times. It now belongs to the city of Gilroy under the name Gilroy Gardens, Although no longer owners, the Bonafontes remain involved in the current enterprise.

Today, about 20 of Erlandson’s trees, now called the Circus Trees, can still be visited. Others are being restored and may eventually be viewable again. So, if you’re in central California, why not bring the kids or grandkids for a visit? Let them have fun on the rides and water slides … but don’t forget to also point out to them the fabulous examples of living art left to the world by Axel Erlandson!

As mentioned, not all of Erlandson’s trees survived, but several preserved dead specimens are found in museums, including in the Museum of Art History in Santa Cruz, California and in the Maryland American Visionary Art Museum in Baltimore, Maryland.

Quite the story! Kinda makes you want to get out and graft your own Tree Circus, doesn’t it?