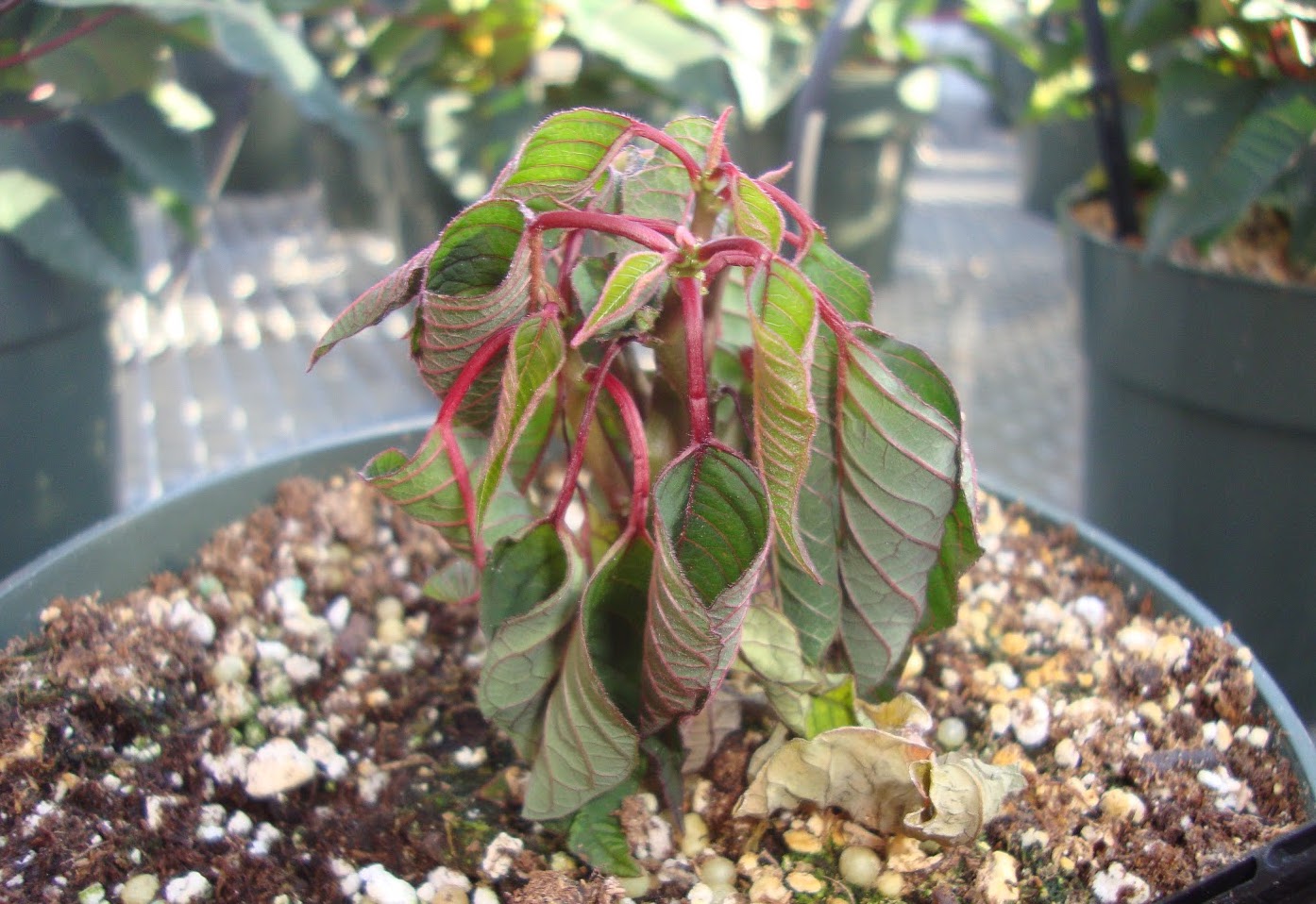 Limp leaves may be caused by a lack of water, but can also be a sign of rot. Source: thegardensoffanshawecollege.blogspot.com

Your favorite houseplant seems to wilt all of a sudden, possibly with a few yellow leaves as well, so you figure it needs watering. Yet, when you check, you realize that’s certainly not the cause, as the soil is still moist. Wilting leaves and soggy soil? Combined, those are symptoms of something quite different … and much, much worse: rot.

Rot is sometimes quite visible. Stem rot and crown rot appear at least partly above soil surface, with soft, brown, spongy, often sunken tissues you can’t miss. Rot root is less evident: you can rarely see your plant’s roots without digging the plant up. And root rot is the most common type of rot. So give the soil a sniff: if it smells like a rotten potato, that will confirm the diagnosis.

As a final confirmation, dig into the soil at the base of the plant to check. If the roots are brown or black and mushy, that’s root rot. On most plants, new roots at least would be white or yellow and certainly not mushy.

It’s important to understand that rot is a disease, usually caused by a fungus (Pythium, Phytophthora, Rhizoctonia and Fusariumare particularly common), but sometimes by bacteria. Also, although most other plant diseases are specific to a certain host plant, the pathogens responsible for rot are generally polyphagous, that is to say, they have no preference and will attack almost any kind of plant.

You really can’t avoid rot pathogens: they are pretty much everywhere. The spores of many of these diseases are probably present in the air you’re breathing right now and certainly they’re in the soil, pots and tools used with your plants.

On the other hand, rot pathogens can easily be present without causing any damage. In fact, that’s usually the case. Why then do some plants get sick while others stay healthy? What triggers the development of the disease?

For rot to develop usually requires either some sort of injury to the plant into which the pathogens are introduced or insufficient oxygen reaching the roots. Outdoors, rot is commonly associated with compact or waterlogged soils (insufficient oxygen) and wounds caused by nibbling animals or gardening tools. Freezing, too, can cause cell death and then rot pathogens can set it.

In the case of houseplants, though, the main catalyst is oxygen-starved roots due to stagnant water underground. The soil remains soggy day after day and any oxygen originally present is used up. If more oxygen isn’t added, the lower levels of the pot essentially become a dead zone, the roots die and hitherto dormant rot pathogens wake up and start to work.

Under good growing conditions, water doesn’t have time to stagnate. When you water your plants, even abundantly, enough to completely soak the root ball, the roots absorb most of this water within a few hours to a few days and whatever water they don’t absorb largely evaporates. Therefore, the soil soon becomes dry to the touch, so you water again, then the water disappears again … and so on and so forth. It’s a cycle you can keep up practically forever.

Conditions That Lead to Rot

Usually gardeners blame overwatering for rot, but in fact, you can water many plants daily and, as long as the excess water drains away, there will be no rot. The main culprit behind rot indoors is actually insufficient light.

When a plant lacks light, it carries out much less photosynthesis and therefore uses much, much less water. That means surplus water can remain in the soil and stagnate, asphyxiating the lower roots: an ideal situation for rot. Watering a light-starved plant is a very delicate balance, trying to meet its moisture needs (reduced, true enough, but still present) without going overboard.

Rot also occurs when the pot is left in a saucer filled with water for long periods, so you should always check that the saucer is empty an hour or so after watering. It’s also easy to overwater plants growing in a pot that has no drainage hole: plants planted directly in a cache-pot or in a terrarium, for example.

Also, novice gardeners often have the bad habit of watering blindly without checking the state of the potting soil. You probably know it should be dry or almost dry to the touch before you think of watering again, yet if Wednesday, for example, is your watering day, you may simply water everything … even plants that didn’t yet need water. This can result in a situation where the soil at the bottom of the pot remains constantly soggy and stagnant. Therefore, there is no oxygen supplied to the lower roots and rot sets in.

How to Prevent Rot

Also provide adequate lighting. This is the most difficult need to meet, as it’s rarely easy to judge whether a plant is receiving the light it needs or not. In general, plants will need bright light to really thrive indoors, with at least some full sun, and some, like most cactus and succulents, really need full sun at all times. Certainly, in the fall and winter, when days are short and often gray, most plants need to be near a bright window to survive. You can also use artificial light, especially fluorescent and LED lamps, to supply the light your plants need.

If you have no choice but to grow the plant in a container without a drainage hole, such as a terrarium, be ultra-careful when watering. With a terrarium, often a spoonful of water is enough! If the soil is still dry after a good hour, try another spoonful of water. Since the walls of a terrarium are transparent, you can literally see if the soil is dry or wet. Dry potting soil will be pale; moist potting soil will be dark. And note that it’s better to err on the side of caution: terrarium plants will do better if they are slightly underwatered than if they get too much.

Do not add a drainage layer to pot bottoms: it actually impairs drainage rather than improving it. As long as your pot has at least one hole in the bottom, any excess water will drain into the saucer and you can then remove it. Simple!

Don’t put a drainage layer on the bottom of a terrarium either: it simply doesn’t work. True enough, excess water will drain into the layer of gravel at the bottom of a terrarium and sit there … for months, but in what way does this help the plants? Their roots will end up dipping down into the stagnant water and rot will set it. Just water your terrarium with extreme care. If you do water too much, soak up the surplus with a rag or use a turkey baster to remove it.

How to Save a Plant Suffering From Rot?

Actually, most of the time, once rot has set in, the plant will die, especially when there is just a single stem in the pot. That’s because you rarely notice rot until it has reached a very advanced stage, with most of the roots gone or the stem almost eaten through. You’re more likely to have luck with plants growing in clumps or when there are several plants per pot. That way, you may well be able to catch things at a stage where only one plant is rotting and the others are still fine.

Start by digging up the plant you hope to save. Now knock off the most of the potting soil and rinse the roots thoroughly in water so you can see what you’re doing. Try to remove the rotten part (soft and brown) with a clean knife or pruning shears, cutting into the healthy flesh to remove the slightest trace of rot, as you would to remove rot from a potato or carrot. Sterilize the tool with isopropyl alcohol (rubbing alcohol) between each cut. Only healthy roots and tissues should be left.

Logically, you’d think this would be the ideal moment to apply a fungicide, but very few fungicides available to the general public have much effect against rot. And they’ll cost you extra. You’d probably do best to skip such a treatment.

Repot in fresh soil and a clean pot. Water, but still, keep the soil a bit on the dry side for a while: just moist rather than wet. It can be helpful to put the plant into a transparent plastic bag, creating a greenhouse effect, until it recovers.

Cut surfaces of succulents (including cacti) should always be allowed to callus over before you start watering them. That can take anything from a few days to a few months, depending largely on the surface area of the cut. Pot them up, but don’t add water until you think they’re ready. For most, that would be a week or two.

Also, leave succulents, which don’t like moist air found under plastic, in the open as they recover; don’t enclose them in a plastic bag.

The success rate is better when you take cuttings from the aerial parts of the plant, especially from those that are still healthy and turgid. You can take stem cuttings of most houseplants and even leaf cuttings of some: African violets, sedums, echeverias, etc.

If All Else Fails

If your efforts are not successful, discard the dead plant and rot-infested potting soil (both can go into the compost), clean the pot thoroughly before reuse and start over again with another plant … this time, providing adequate lighting, good drainage and appropriate watering.

0 comments on “When Rot Attacks Your Houseplants”