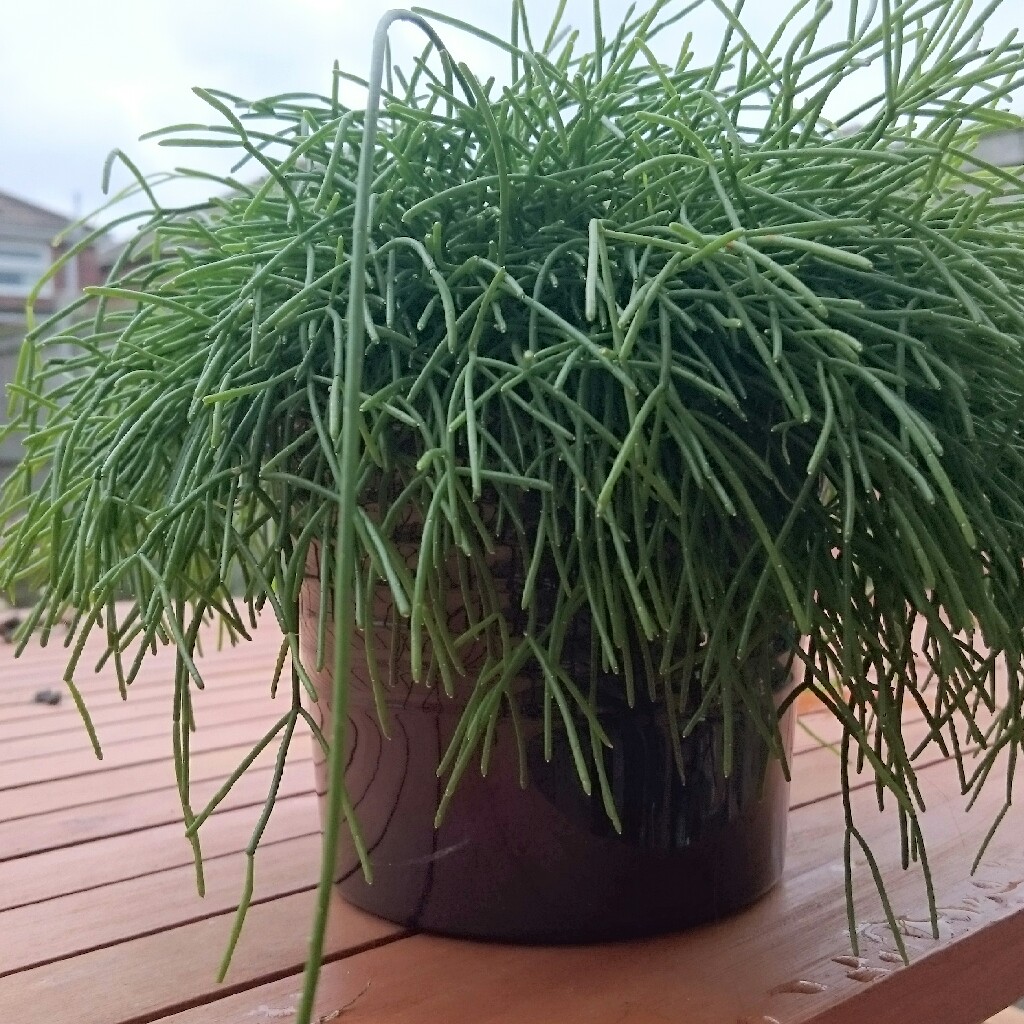 If you’ve ever read anything about cactus, there is always a statement about them being strictly endemic to the New World, with one exception: mistletoe cactus (Rhipsalis baccifera, syn. R. cassutha).

Have you ever wondered how this one species managed to travel from the New World (it’s widely distributed in Central and South America, the Caribbean islands and is even native to Florida) to the Old World, where it is found in Madagascar, Sri Lanka and throughout most of tropical Africa? A lot of scientists have!

But first, let’s take a quick look at the plant itself.

Yes, that’s what the mistletoe cactus looks like in the wild: long tubular strands of green spaghetti dripping from trees (it’s an epiphyte), more rarely cliffs, from sea level well up into the cloud forest. Indeed, another of its common names is spaghetti cactus.

And yes, it does look like European mistletoe (Viscum album), also an epiphyte with dangling stems, especially when it is adorned with its somewhat translucent round white berries, a feature they both share. The difference is that the mistletoe cactus has no true leaves (beyond its original cotyledons or seed leaves, that is) while true mistletoe does. The two even spread from tree to tree in the same way: birds eat the berries of both and excrete the seeds in their droppings on tree branches where they then germinate.

Of course, the two plants aren’t even vaguely related. Mistletoe is a parasitic plant in the Santalaceae family while mistletoe cactus is a true cactus, complete with areoles (little cushions of bristles), a characteristic of all cacti. In the case of the mistletoe cactus, the bristles are small, soft and often fall off over time.

The mistletoe cactus produces small, white, star-shaped blooms, often in winter. They’re pretty enough, but too small to be striking. They readily give way to berries (no pollination seems to be required) and the latter go from green to white (pink or red in some subspecies) as they mature and last for months.

How the Mistletoe Cactus Traveled Around the World

There are basically four theories as to how the mistletoe cactus spread to the four corners of the tropical world … none of which are truly clear winners.

Theory 1 suggests the plant is a recent introduction to the Old World and would have been brought over to Africa by 16th-century sailors. Why they would have done so is not clear: the plant is not particularly useful (the berries are edible, but not tasty, and it has few medicinal uses).

I personally think this theory is unlikely to be true.

First, if it had been recently introduced (the 16th century is the equivalent of something like 1 second after midnight on the scale of evolution), it would be of limited distribution and probably found mostly near African ports. Yet it is widespread and mostly widely distributed in the interior of the African continent.

Secondly, the subspecies found in Africa are not the same as those found in the New World, notably the considerably different R. baccifera horrida from Madagascar, with its clearly shorter stems, long-lasting bristles, different chromosome count and terrestrial growth habit. This suggests hundreds of thousands, if not millions, of years of independent evolution, not merely some 500 years.

For those reasons, theory 1 is pretty much poo-pooed by the scientific community.

Theory 2, the continental drift theory puts forward that R. baccifera is a very old species—in fact, it would have to have been one of the oldest cacti!—and would have already been present on the supercontinent Gondwana before it broke apart, Africa and South America going their separate ways about 130 million years ago. So, according to this theory, it didn’t really travel much on its own, it just sailed along with the continents as they moved apart.

This theory is going to be hard to either prove or disprove, as cacti simply don’t leave fossils. However, estimations can be made based on molecular evidence. And the most recent estimations tend to suggest that, on the contrary to cacti being ancient plants from Gondwana, they are instead fairly modern plants and likely first evolved on in Central America and northern South America quite recently, probably around 35–30 million years ago, well after the continents separated. And the species R. baccifera would have evolved more recently still, perhaps 25 million years ago.

Again, you can’t currently prove this to be true, but if the entire cactus family’s evolution postdates the separation of the continents, that would certainly punch a serious hole in the continental drift theory!

Theory 3 is the traveling bird theory. It proposes that a long-ago bird carried the seeds of R. baccifera in its gut and pooped them out after flying across the ocean (either the Atlantic or the Pacific: take your pick!), starting a new population in Africa.

The huge flaw in this theory is that fruit-eating birds don’t usually fly across such vast bodies of water … not defecating the whole time. (Perhaps it was constipated?) It would probably imply the poor winged creature having been picked up by a strong storm and carried across. Or maybe there might were ocean-crossing fruit-eating birds millions of years ago that no longer exist.

Of course, the South Atlantic Ocean was narrower back in the days when the first Rhipsalis likely evolved, making the trip in that direction a bit less unlikely. (The Pacific would have been, on the contrary, wider then, making that direction very doubtful.)

And there could also have been some island-hopping involved, with the plant making the crossing in stages via intermediate islands that may now be underwater. Certainly, R. baccifera has a propensity for island-hopping even today, being found on such isolated islands as Mauritius and the Seychelles. Also, it would have appeared to have crossed the entire Indian Ocean on its own, over 3,000 km even assuming it island-hopped via the Seychelles, 5,000 km if it traveled straight from Africa (the Atlantic today is 2,848 km wide at its narrowest point), as the plant is found in Sri Lanka and on the east coast of India.

Certainly, the traveling bird theory is my favorite.

Theory 4 is the ancient space alien theory. This is my own concoction and the concept is that millions of years ago, space aliens moved the plant around just to mess with scientists trying to understand how R. baccifera got around.

Although I invented this theory, I don’t put much store in it.

Here are a few details about R. bacciferafor those of you who might want to grow it.

With its clearly trailing nature (stems can be up to 6 feet/1.8 m in length in the case of some subspecies), mistletoe cactus is quite obviously an excellent choice for hanging baskets. It can also can be used in wall planters.

It’s a very easy-to-grow plant, well adapted to average indoor conditions. But don’t treat it as a “cactus,” even though it is one. It hails from tropical rainforests and won’t appreciate the dry conditions that arid-climate cacti prefer. Its care would more closely resemble that of such jungle cacti as Christmas cactus (Schlumbergera russelliana and S. x buckleyi) and Thanksgiving cactus (S. truncata).

Plant it in ordinary potting soil (you could also use orchid mix, but that isn’t necessary) and keep it somewhat moist, watering thoroughly as soon as the soil is dry to the touch. Bright light, including full morning sun, is best, but you may need to move it back from blazing hot south windows during the summer months. Fertilize lightly if at all in the spring and early summer. Indoor temperatures are fine all year, but it will easily take temperatures down to 60˚ F (15˚ C).

It loves to summer outside. I just hang mine in a tree where it gets sunlight filtered through leaves like it would in the wild.

It is readily multiplied by stem cuttings and is surprisingly easy to grow from seed.

All in all, mistletoe cactus is one of the easiest houseplants you can grow.

More Where That Came From

There are actually some 35 species of Rhipsalis, all of them easy to grow. Some have rounded stems, others flattened ones, others yet almost square. There is considerable confusion as to identity on the market and plants in garden centers are often mislabeled (if, indeed, they bear any label at all).

You’ll find specialist growers on the Internet where you can order correctly named Rhipsalis in both the United States and Europe. In Canada, though, you pretty much have to wait and see what shows up in your local garden center!