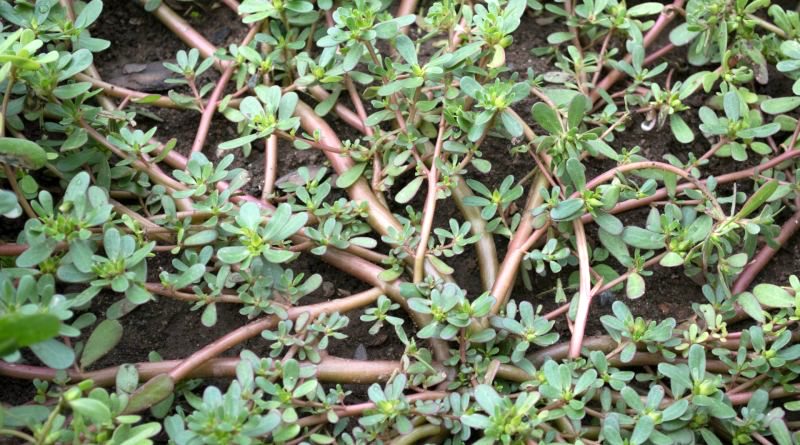 Yes, purslane is a vegetable, but also a weed. You might want to forage it rather than grow it. Source: antropocene.it

Question: I wondered if I can grow purslane in my vegetable garden in zone 4. If so, should I bring the plant indoors in the fall to protect it from the cold? I’m asking, because I read that purslane is a staple food in Crete which helps explain their low rate of cardiovascular disease. It’s also a medicinal plant with many virtues.

Answer: Yes, you can certainly grow purslane in your vegetable garden, but I am not sure you would really want to. Here’s why:

Purslane (Portulaca oleracea), also known as pigweed*, a low-growing plant with thick, creeping stems and succulent leaves, is a fast-growing annual often grown as a vegetable, but which is also a very common weed, possibly native to Asia, but long established throughout Europe and Africa as a pernicious weed and now present almost everywhere in North America, South America and Oceania as well. Once you sow it, therefore, it often becomes more of an enemy than a useful plant.

*The name pigweed comes from its use as pig fodder.

If you do decide to grow purslane, be sure to harvest the stems before the seed capsules open and release their seeds. If not, mulch abundantly to avoid giving the seeds a chance to germinate (they only sprout in bare soil in full sun) …or grow it as a potted plant far from the vegetable garden. Certainly, you should never grow this vegetable in a community garden, as it could cause problems for other gardeners.

How can purslane produce seeds, since it never seems to bloom? In fact, it does bloom, but very discreetly, with tiny yellow flowers that are open only a few hours on sunny mornings and even then, only a few days per season. If you blink, you’ll miss them!

Forage Rather Than Grow

I personally forage purslane rather than grow it and you certainly can do so as well. There is almost certainly purslane growing spontaneously in your area, perhaps in a field or along a road or even sprouting from a crack in the sidewalk, in which case simply harvest it and rinse well before using. You don’t actually have to grow it.

To answer your second question, above saving purslane from the cold, since purslane is an annual, thus dying at the end of the season, there is no point bringing the plant indoors in the fall. However, you could harvest seeds and sow them indoors to serve as sprouts or microgreens. That way, you can have fresh purslane all year long!

0 comments on “Can You Grow Purslane in the Veggie Garden?”