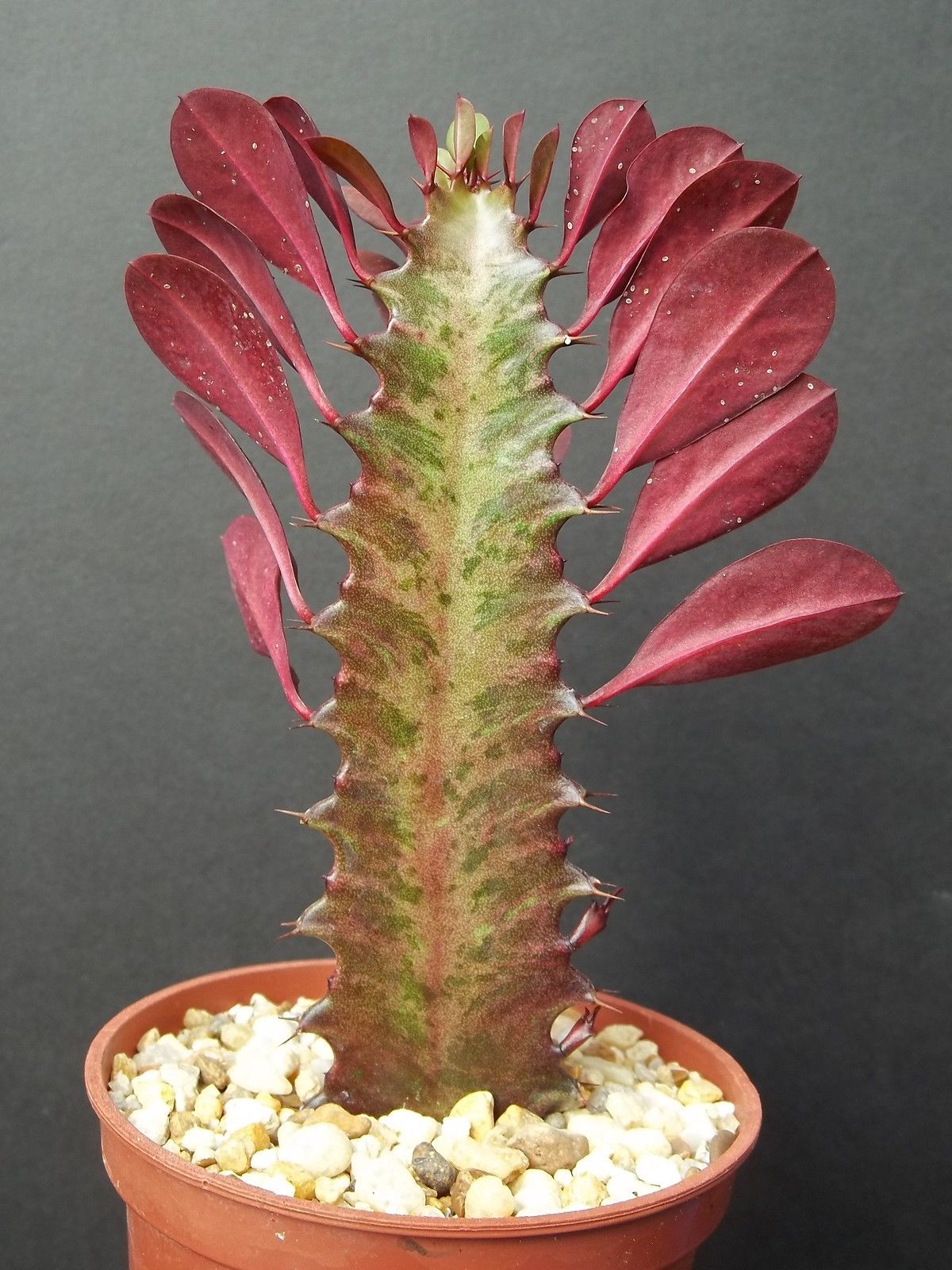 The red African milk tree (Euphorbia trigona ‘Rubra’) is often burgundy red when you purchase it, then turns green under the lower light of your home. Source: http://www.ebay.com

Question: I bought a euphorbia as a houseplant. I chose it because it was dark red, but now the new shoots are green and it’s losing its red coloration. Does it need more sunlight? And how do I water it?

Answer: The euphorbia you bought is probably Euphorbia trigona ‘Rubra’ (also sold as E. trigona rubra or E. trigona ‘Royal Red’), often called the red African milk tree because of its milky white sap and African origin. It’s a mutation of the normal form that has triangular green stems marbled with white and small green leaves. Exposed to intense sun, ‘Rubra’ produces a reddish stem and red leaves. This coloration tends to disappear in winter, even in summer when the plant is in too much shade. If it’s put back into the sun, the reddish color returns.

This euphorbia is not the only plant that reacts that way. Many other plants, especially succulents (aloes, echeverias, crassulas, rhipsalis, etc.), turn reddish in full sun, because the red pigmentation, caused by a buildup of anthocyanins, acts as a kind of sunscreen, protecting the stems and leaves against the harmful effects of the sun and especially its ultraviolet rays. Under lower light, the “sunscreen” is not needed and fades away, leaving a green plant.

In many non-succulents, there is a similar situation, except it’s the fragile new leaves that are red at first, but then become a normal green color as they mature and harden off.

It is clear that your euphorbia is not getting enough sun for it to maintain its reddish color. Before you bought it, it was probably grown in a greenhouse, where providing intense sunshine is easy, but in the home, it really should be placed near a sunny window at all times. This is especially true in the winter, when the sun is much, much less intense. And for an even more intense coloring, grow it outdoors in full sun during the summer months.

As for watering, like most succulent euphorbias, the African milk tree is very tolerant of irregular watering. Ideally, you’d water abundantly, then allow the growing mix to dry thoroughly before watering again. The frequency of watering will vary according to the conditions and the seasons: you may need to water it weekly in hot summer weather, but only every two to three weeks under cooler, shadier winter conditions.

0 comments on “When a Red Euphorbia Turns Green”