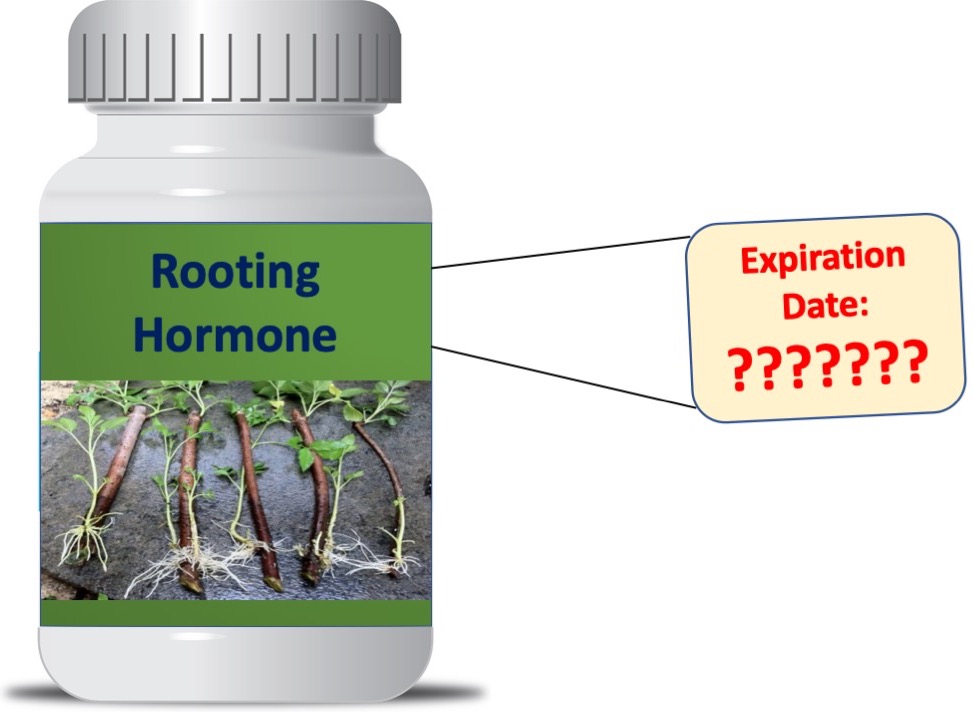 Question: I just found a bottle of rooting hormone that must be 2 or 3 years old. Is it still any good?

Answer: That’s not an easy question to answer.

There is no expiry date on rooting hormones (at least not on those that I’ve been able to find) and in the past, the consensus was they didn’t need one, because they were good for a long, long time. My professor of horticulture said they would still be effective more than 10 years after the container was first opened, but that was 40 years ago. Still, many of the products sold back them are still on the market with exactly the same formula. I know of professional plant propagators still using rooting hormone over 5 years old with and they have no complaints.

However, there now is now a contrary opinion. Several years ago, the U.S. Forest Service began advising that rooting hormone powder was only good for 18 to 24 months and this information has been widely quoted ever since. What studies that information is based on remain a mystery, but one would assume there must be something behind this advice.

Ideally, someone would test a few samples of older rooting hormone to see if it is still effective, but I haven’t seen anything on that subject. (Great idea for a student project, though!)

If we look at the subject logically, there is no particular reason why properly stored powdered rooting hormone (kept dry, at room temperature and out of direct sunlight) would degrade in only 18 to 24 months. It is essentially talc (or a similar product) to which have been added artificial hormones like IAB (indole 3-acetic acid) and NAA (1-Naphthaleneacetic acid), both of which are very stable. There is really nothing in such a product that degrades appreciably. But then you have to take into account the risk of contamination. That might be where the U.S. Forest Service recommendation comes in: they may be assuming that contamination of older product is likely.

An open container of rooting hormone left out on a potting bench and exposed to sunlight, high temperatures and microbes might well become contaminated after a few years while one that is carefully sealed and put away in a dark spot at room temperature  or cooler after use could theoretically last… well, at least 10 years.

Ideally, you would pour a small amount of powdered rooting hormone into an separate container (such as a small bowl or measuring spoon) and plunge the end of the cutting into it there … but then put any excess hormone into the trash instead of returning it to the original container. Thus the hormone in the container is never in contact with plant material. That should prevent contamination in most cases.

I’ve always kept my rooting hormone until I used it all up: probably 5 or 6 years. My current container is over 2 years old, is about one third full and I’m still getting good results. I’ll probably continue to use it as long as it lasts … unless I realize that my cuttings are no longer rooting as readily as before.

But if you want to toss yours after 2 years, that’s up to you.

So much for the rooting hormone in the form of powder. Gel or liquid products are likely more prone to contamination (microbes prefer moisture to dryness), plus some contain alcohol than can evaporate, but such products have added preservatives plus a fungicide to delay that kind of degradation. Since most still don’t bear an expiry date, I think it can be assumed that they’ll be effective for at least 2 years and quite possibly much longer.

I hope that was useful!

4 comments on “How Long do Rooting Hormones Last?”