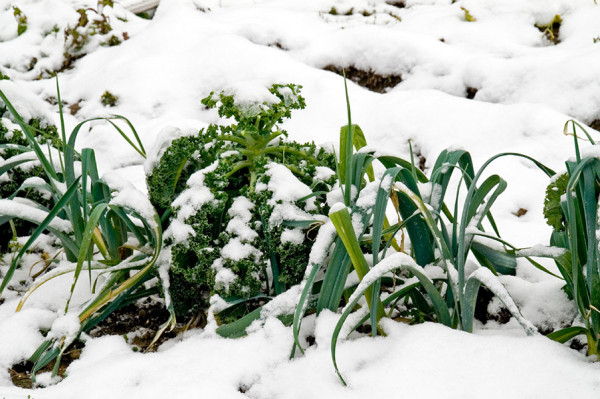 Many leeks are very hardy and can be grown as perennials. Source: bonnieplants.com

Normally you should be starting leeks (Allium ampeloprasum, formerly A. porrum) for your vegetable garden fairly soon (in February in most climates, so get those seed orders in!). Leeks can and should be planted out about 3 or 4 weeks before the last frost date, as they do best when they start their season in cool conditions and are not harmed by frost. And normally, you’d harvest them in the fall, after the first frost, since cold intensifies their taste. Then you’d repeat the same treatment year after year. But not if you’re a laidback gardener: a truly laidback gardener perennializes their leeks, only sowing them once every decade or so.

Think of leeks as being a bit like rhubarb. You sow them one year, but don’t get full harvest until the third year. You can do this because the leek is actually a hardy perennial (“winter leeks” are especially hardy selections, some tolerating USDA zone 3!). So if you don’t harvest yours in the fall, it will still be alive and thriving in the spring and in fact, will actually beautify your vegetable garden with its lovely globes of pink to white flowers. (Alternatively, you can eat the flowers and flower stalks if you prefer.) Then it divides, forming a clump of plants. The second fall, therefore, you’ll be able to harvest a stalk or two from each clump, leaving the others in place for future generations. Over time, you’ll get bigger clumps and bigger harvests. By the third year, you’ll really be off to the races!

The first year, I suggest you sow twice as many leeks as you need. That way you can harvest half the traditional way, that is to say, in the fall, and leave others alone so that they perennialize and become the source of your future annual harvest.

By the way, when your “colony” is well established, you can also harvest some leeks at snow melt too, which therefore gives you two harvests per year, one in fall, one in earliest spring! You’ll discover that spring leeks are the tastiest, because cold brings out their sugars. Just make sure to harvest them early, for as soon as the flower buds form, the plant becomes tough and loses its taste.

Here are a few winter leeks (hardy leeks) you can perennialize. All are hardy to at least zone 4, most to zone 3.

Not the Same as Multiplier Leeks

Do note that perennialized garden leeks are the typical thick-stalked, white-shafted leeks you’re used to growing. However, there is also a so-called multiplier leek or perennial leek, which is actually a sort of ancestral leek, much like a green onion, with a small white bulb at the base and thin shafts. It produces more prolifically, forming dense clumps, and is usually started from a planted bulb, much as you would start garlic from cloves. You harvest the leaves for use as a leek-flavored condiment like you would chives. The multiplier leek tends do go dormant in the summer (at least where summers are hot), but otherwise grows much like a perennialized garden leek.

Watch Out for Leek Moths

Whether you grow your leeks as annual or perennial crop, always be on the lookout for leek moth (Acrolepiopsis assectella), a nondescript little moth whose larvae can so serious damage to leeks. Read about its control in the article A New Insect You’ll Hate.

5 comments on “Perennialize Your Leeks”