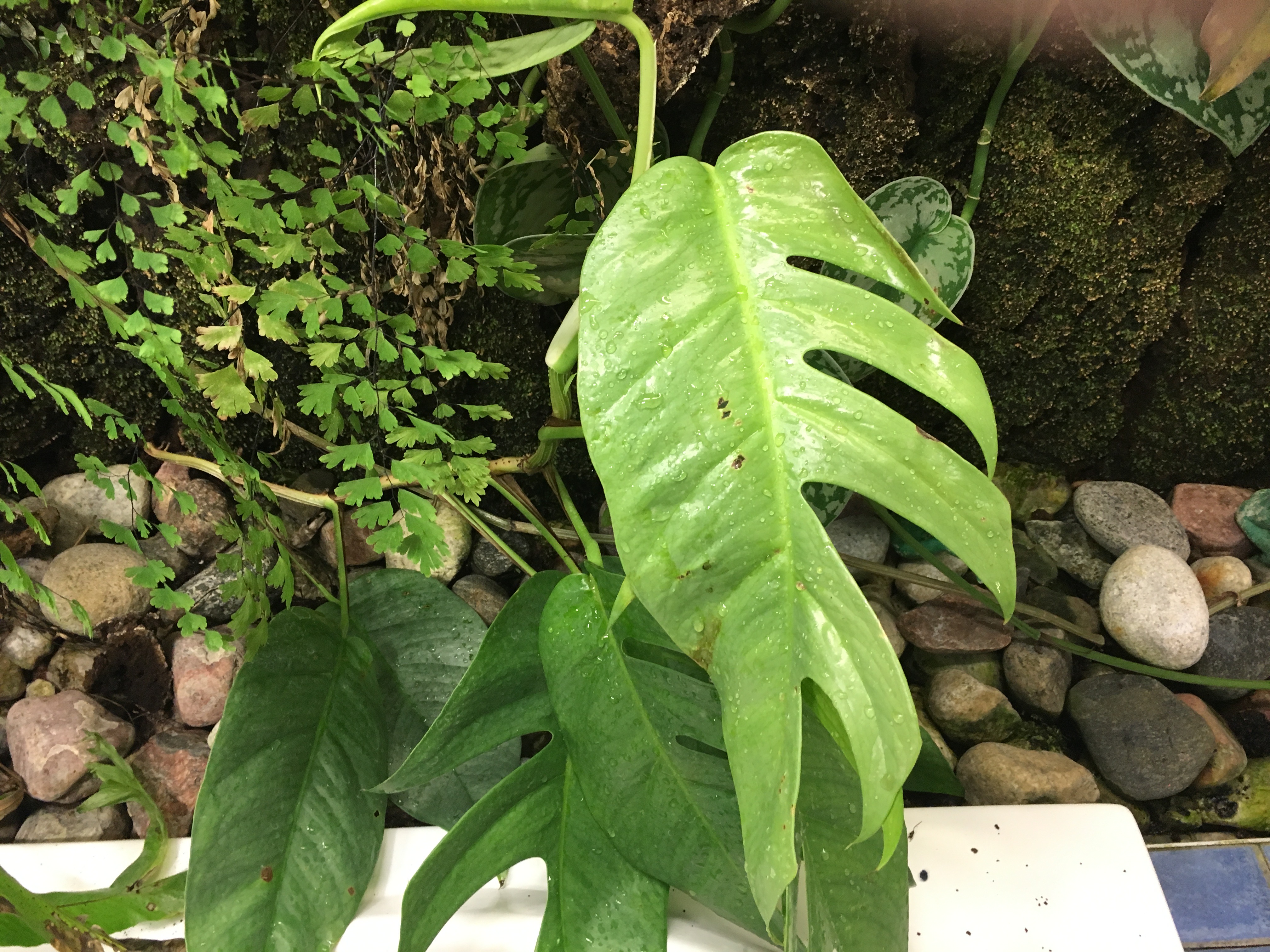 Should I be taking my pothos out to a bar to celebrate? Because my blue pothos (Epipremnum pinnatum ‘Cebu Blue’) has reached adulthood … after over 20 years of care, just like a human.

As with many aroids (the best known of which is the so-called Swiss cheese plant, Monstera deliciosa), the pothos has a juvenile form, with smaller, entire leaves, in this case about 3 inches (7 cm) long, and thin stems. Then, as it matures, and if conditions are right, the leaves get bigger and bigger and the stems get thicker.

At some magical point, the plant reaches “adulthood” and the formerly entire leaf becomes huge (up to 2 feet/60 cm long) and begins to split, eventually becoming pinnate, looking like a palm frond, with thick stems. It will even flower at some point (although the blooms are, I’m told, nothing to shake a stick at).

I have probably half a dozen blue pothos at my place, most in their juvenile state. In fact, the original plant is still very juvenile. But others are maturing at various rates, with larger and larger leaves. What’s the difference?

It depends on how you grow them.

My original plant grows in a wall pot and is allowed to dangle. Dangling is not conducive to mature growth, so it has only tiny leaves. Dangling is what this tropical Asiatic liana does in the wild when it loses its grip on the tree trunk it is climbing on. As it trails downwards, the leaves get smaller and smaller, then disappear entirely.

When my plant does this (produce bare stems with no leaves), I trim off the bare part to force it to produce more foliage: dangling bare stems are just not that attractive. In the jungle, though, the now bare stem keeps growing downward, eventually reaching the jungle floor when it now begins to creep along, leafless, until it finds a new trunk. Then it will start growing upwards again and to produce small leaves once more. They then get bigger and bigger as it grows up into better light and eventually, the plant reaches adulthood and new giant cut leaves form.

My mature and variously maturing pothos are all growing upwards … on my green wall. Growing upwards is conducive to enlargening leaves. Eventually they get to the top (said wall is only 7 feet/210 cm tall, after all, not the 100 feet/30 m or so the plant can attain in a jungle!), so I cut them off and reroot them at the base of the wall. They don’t lose a beat and continue to grow upwards … and in size.

Actually, I just pulled my mature stem from the wall (it had reached the top) and will be starting it from the bottom again. I’m sure it will continue to mature to even bigger, more deeply cut leaves (the longest is currently 13 inches/33 cm in length and only cut on one side) on its next trip upwards.

The most common pothos in homes is not my blue pothos, but rather the golden pothos (Epipremnum aureum, syn. Scindapsus aureus), with heart-shaped leaves splashed with yellow or, on certain clones, white.

But it will also grow, eventually, into a jungle giant with large split leaves if you let it grow upwards, say on a moss-covered stake it can root into. When it grows so tall, it begins to stretch beyond the stake, start it all over again. Take cuttings from the large-leaved section at the top and reroot them in a fresh pot of soil, at the base of a new stake. The cuttings will then start to grow upwards again without losing their size (or not much of it) and grow even bigger over time. Repeat as necessary until the leaves are truly giant and deeply cut.

Most people grow it in a hanging container from which it will dangle and thus always remain a juvenile. But if you grow it upwards, you can—slowly!—watch it become an adult.

I think you’ll be kinda proud when your baby pothos reaches adulthood, don’t you?

26 comments on “When Pothos Leaves Do the Splits”