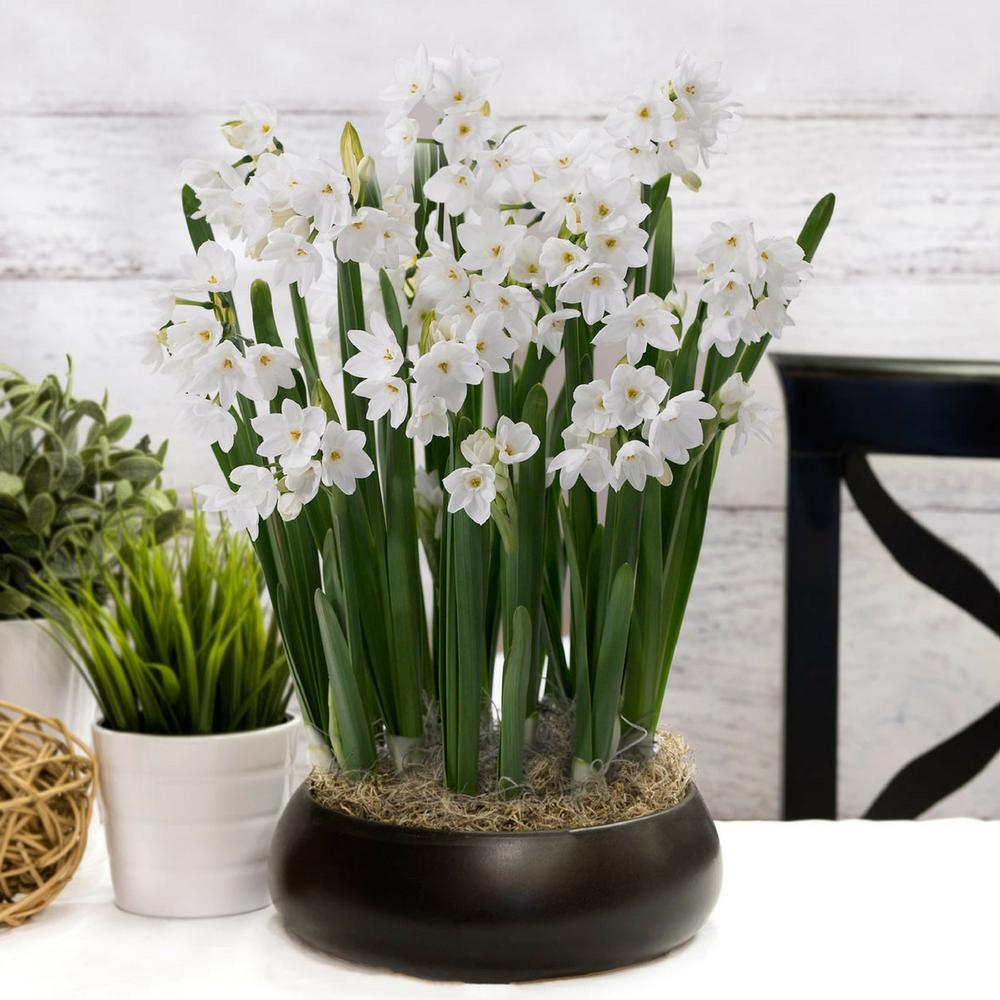 Sometimes you can get a Paperwhite to rebloom! Photo: http://www.longfield-gardens.com

If you’ve been gardening for a while, you’ve certainly heard that it is impossible to get a Paperwhite narcissus (Narcissus papyraceus, formerly N. tazetta), the popular Christmas-blooming daffodil, to rebloom. But it ain’t necessarily so!

All the experts agree: you can’t recuperate a Paperwhite narcissus bulb that has been forced (grown indoors for early flowering). The only choice, we are told, is the trash or compost bin. That’s because blooming indoors is supposed to tire the bulb out, leaving it unable to bloom a second time. But that’s not my experience.

I’m very reluctant to give up on a plant that shows even the slightest sign of life. So, about 15 years ago, after a pot of Paperwhite narcissus finished blooming in January, I simply cut off the faded flowers, leaving the leaves intact, and kept watering and fertilizing it. To my surprise, it remained healthy and green. When summer came, the leaves were still green, so I continued, but moved it outdoors. The foliage did die back in late July.

I unpotted the bulbs to examine them. They were plump and healthy, had a solid feel and, in fact, looked much like the original bulbs. I stuffed them into a paper bag and kept checking on them. By late fall, there were pale yellow sprouts on each one, so I potted them up again and started watering. They bloomed again quite nicely in January (about a month later than the first time).

I repeated the experience the following year, except I simply left them in their pot during the dormancy period, watering again only when the pale sprouts appeared. There was less bloom this time (the bulbs had divided a lot and were smaller), but still, they bloomed.

I stopped the experiment after this third blooming. The bulbs had so divided there were only small bulbs left in the pot, none I judged big enough to bloom. So then I finally did toss them into the compost pile.

After this first experience, I’ve tried twice more and both times had the same results: I can get at least 3 seasons of bloom from a Paperwhite narcissus under my conditions. I do try and grow them in full sun and fertilize regularly. Ideally, I’d like to grow them cool (below 50˚F/10˚C at night), as this gives shorter flower stalks that don’t flop, but I have no spot in my home that is both cool and sunny, so I simply stake them. I find the new cultivars, like ‘Ziva’ , ‘Galilee’ and ‘Jerusalem’ much sturdier and less needful of staking.

Note that I grew my Paperwhites in potting mix, not in gravel, marble chips, or in water alone (all of which are often used for growing Paperwhites). My experience with this kind of hydroponic culture is that bulbs and thick-rooted plants (carrots, beets, etc.) simply don’t plump up in an aquatic environment: they seem to need the repeated stress of going from moist to nearly dry and back again to form a good bulb. So you would have to grow them in potting mix if you wanted repeat bloom.

Also, if you live in a warm temperate climate (USDA zones 8 to 10), it would be far easier simply to plant them outdoors where they will bloom in January, February or March, depending on your local conditions. I’ve seen Paperwhites in bloom in several gardens in Los Angeles in late January, for example.

So, the information that Paperwhite narcissus won’t rebloom is untrue: a sort of a horticultural white lie. Certainly, it is far easier to simply toss them when they finish flowering and buy new bulbs, but, again if you’re like me and like to experiment, it really isn’t all that hard to get repeat bloom from a Paperwhite!

0 comments on “Can You Get A Paperwhite to Rebloom?”