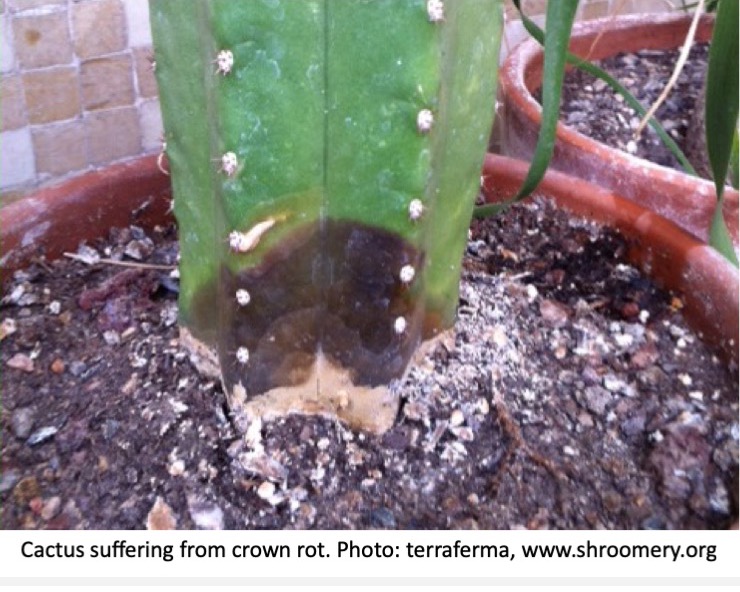 Rot is, unfortunately, a common problem on cactus. While environmental factors are involved (rot is most common when the plant is overwatered, growing under conditions of high atmospheric humidity, when the stem has been wounded, after an insect infestation, etc.), it’s important to understand that the rot itself is a fungal or bacterial disease and will likely continue to develop unless something is done.

Rot can occur on any part of the plant, from the roots to the tip, although crown rot—rot starting where the stem meets the soil—is perhaps the most common. Look for soggy black or brown, somewhat sunken tissue, often with pale green or yellow growth around it. Root rot is the most difficult to detect, since it is underground. Often the first sign of it is when the entire top of the plant begins to yellow and sag.

Many cactus become corky and brown at the base over time and that’s quite normal for those species. Try poking the base of the plant with a (gloved) finger. If the brown part is hard, it’s not rot. Rot will be soft.

In the wild, cactus often seem to cure themselves, compartmentalizing around the wound with callus tissue to keep it from spreading. That’s not nearly so common indoors, under the lower light and higher humidity inevitably found there. Besides, the rotted section, even if the rot stops spreading, will forever mar your plant’s appearance. That’s why major surgery is recommended. Fortunately, you don’t need years of medical training to carry this out.

Any surgeon will tell you sterility in the operating room is vital. So it is with cactus surgery as well. Throughout the operations to follow, always keep your cutting tools (knife, pruning shears, even saw [for really thick stems]) sterile by wiping them down with rubbing alcohol before cutting and between each cut.

When rot occurs aboveground, near the tip or in the middle of the stem, simply cut off and toss the top part using a sharp knife or pruning shears. Study the wound on the lower part of the stem to be sure there is no sign of rot (dark, spreading tissue or even just an orange discoloration). If there is, recut even lower until you see the remaining tissue is healthy.

You may want to treat the wound with powdered sulfur, although this is not as vital as with root or crown rot.

Over time, the cut will callus over and one or more new stems will start to form just below the cut. It’s up to you to decide if you want to keep just one stem or more. Over time, the plant will fully recuperate … assuming, of course, you’re giving the plant the growing conditions its needs.

When the roots or the base of the stem show signs of rot, you’ll need to do more drastic surgery. You’ll need to decapitate the plant and reroot its top. This will only work if the top part is still healthy and green. If it’s already yellowing or becoming soft, might I suggest holding a little cactus funeral service … then going out to buy a new one?

Assuming the top is healthy, with a knife or pruning shears, cut off the top of the plant, above the wound. Dispose of the bottom part. If you decide to keep the pot, make sure you thoroughly empty and clean it before reuse to remove any disease spores.

Examine the wound. Is the tissue healthy? If you see the slightest tinge of brown or orange inside, lay the cutting on its side and slice off another section, as you would slice a carrot, then again and again if necessary, until you end up with a section showing no rot. Sometimes you’ll find the rot has spread right through the plant, in which case it’s game over, but usually you soon reach healthy tissue.

When you’re sure you’ve excised all the rot and pre-rot (orange tissue), apply sulfur powder to the wound (it’s a natural fungicide).

Now set the cutting aside to callus over.

Callus formation can take as little as a week for thin-stemmed cactus to 3 months or more for a thick-stemmed one. You can simply lay the stem on its side if callusing will only take a few weeks. If it’s going to last a few months, the stem tip will begin to grow upward from its prone position, ruining the cutting’s future symmetry. If so, either give the prostrate stem a quarter turn each week so it won’t know which way is up or stand the cutting in an upright position.

When callusing is completed and the entire cut surface is completely dry and hard, pot the cutting up into dry potting soil, using a cactus mix if that is your preference. Do not water right away! Give the new plant a few weeks in dry soil until roots start to form. Then start to water lightly. When you start to see healthy new growth, you can begin watering normally.

In clumping cactus, when rot appears on a stem, the treatment can be as easy as cutting out or pulling off the one or two stems with the disease.

If it turns out to be root or crown rot affecting just one side of the plant, though, division may be the best solution. Remove the plant from its pot and pull the cluster apart, keeping only healthy stems. They’ll probably already bear roots and, if so, you can simply pot them up, although hold off on watering for a week or two.

If stems aren’t rooted, consider them cuttings. Clean them off and let them dry exposed to the air for a few weeks, then pot them up. As above, don’t water them at first, then began watering normally when you see new growth.

So, you can (often) save a rotting cactus. You just need to know how!

2 comments on “How to Save a Rotting Cactus”