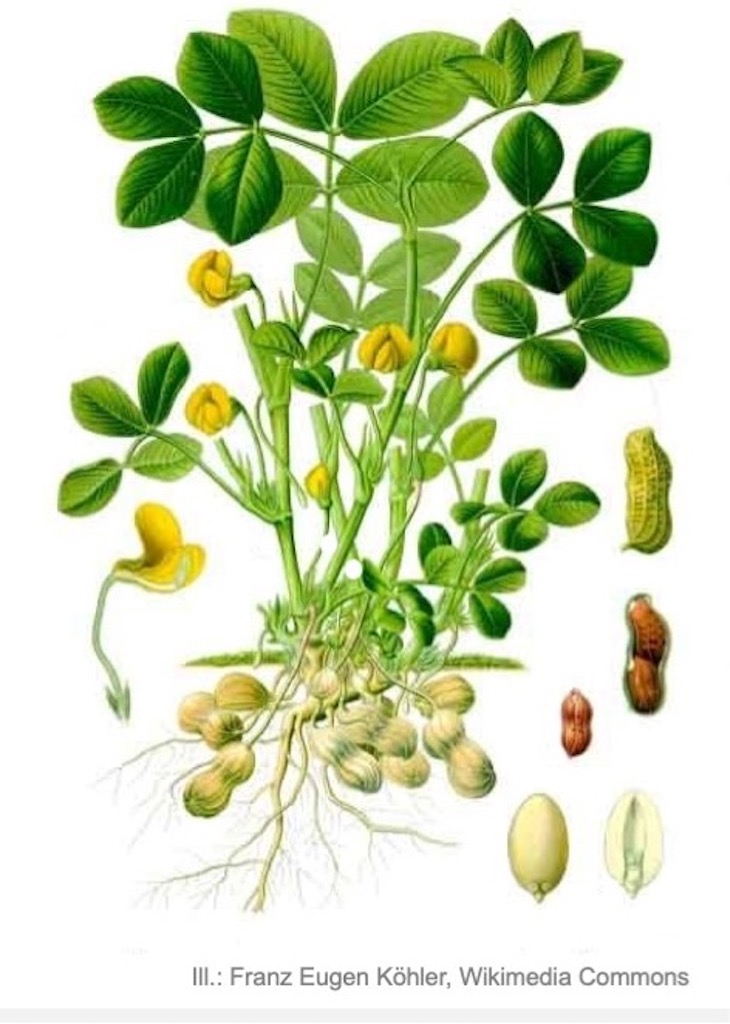 Question: I’d like to try growing peanuts in my garden in the spring. What are the requirements for this plant? Where can I get seeds? What are my chances of success?

Question: The peanut (Arachis hypogaea), sometimes called groundnut, is a legume and vaguely resembles a clover in its habit, but with pinnate leaves of 4 to 6 leaflets. It produces yellow pea-shaped flowers. Once the flower is pollinated, it produces a curious tubular extension called a peg that elongates and sinks into the soil where the seeds are produced. So, peanuts grow underground and not up in the air like most other fruits and nuts!

Peanuts are not grown commercially in cold climates like yours because they require a long growing season: at least 100 days for the fastest cultivars and up to 150 days for commercially grown varieties. Thus, peanuts are mostly grown in tropical to warm temperate regions. Although it wouldn’t be wise to start a peanut farm in your climate, but you can grow peanuts on a small scale in areas with short summers, much as you can grow tomatoes even though they too are unable to grow to maturity under your climate without a little extra help.

Therefore, you’ll have to start your peanuts indoors.

Start peanut seeds indoors about 6 weeks before the last frost date. Sow them in a peat pot: that way there’ll be no shock to the roots when you transplant them to the garden. Sow at about 1 inch (2.5 cm) deep, cover the pot with a transparent dome or bag to give the seeds greenhouse conditions, then put the pot in a warm spot: 77° F to 85 °F (25 ° C to 30 ° C) if you can. Germination takes about 10 days. After germination, remove the dome or bag and place the plants near a very sunny window or under intense artificial light, watering as needed.

When the soil warms up outdoors and there is no longer any danger of frost, acclimatize the plants to open air conditions, then transplant them into your garden. (You can also grow them in containers) Prefer a very sunny spot protected from cooling winds, ideally in sandy soil. Avoid heavy soils that tend to remain moist for long periods. Add a bit of slow-release fertilizer to the soil, if possible one low in nitrogen, as too much nitrogen may hinder the development of the symbiosis that usually develops between peanuts and beneficial soil bacteria (Bradyrhizobiumspp.)

Summer care is fairly simple. Peanuts are quite drought tolerant, so you’ll only need to water in the case of extreme drought. Do keep the weeds down, though.

After the first fall frost, pull up the plants and you’ll discover peanuts in the shell. They’re not nearly productive in cool-summer areas as in warmer climates, but still, you ought to be able to grow at least a handful per plant. Dry the peanuts out, then roast them at 300 ° F (150 ° C) for about 20 to 25 minutes before serving.

Growing peanuts is an especially interesting project for children, so don’t hesitate to involve them in your trials.

If you want to start peanuts from seed, you’ll need viable seeds and those you can buy at the supermarket just won’t cut it. They’ve been roasted (and probably salted too!) and simply won’t germinate. Sometimes you can find seed packs of peanuts in garden centers. Otherwise, simply order them in by mail, as many seed companies offer them. Here are just a few:

‘Garoy’, ‘Valencia’ and ‘Tennessee Red’ are among the ‘short season’ varieties best suited to a short-season climate.

So, growing peanuts is really quite simple, even when your gardening season is only 90 days long. Still, don’t count your peanuts before they ripen!

Here’s a great graphic from Insteading on growing peanuts in warmer climates:

2 comments on “Growing Peanuts in a Cold Climate”