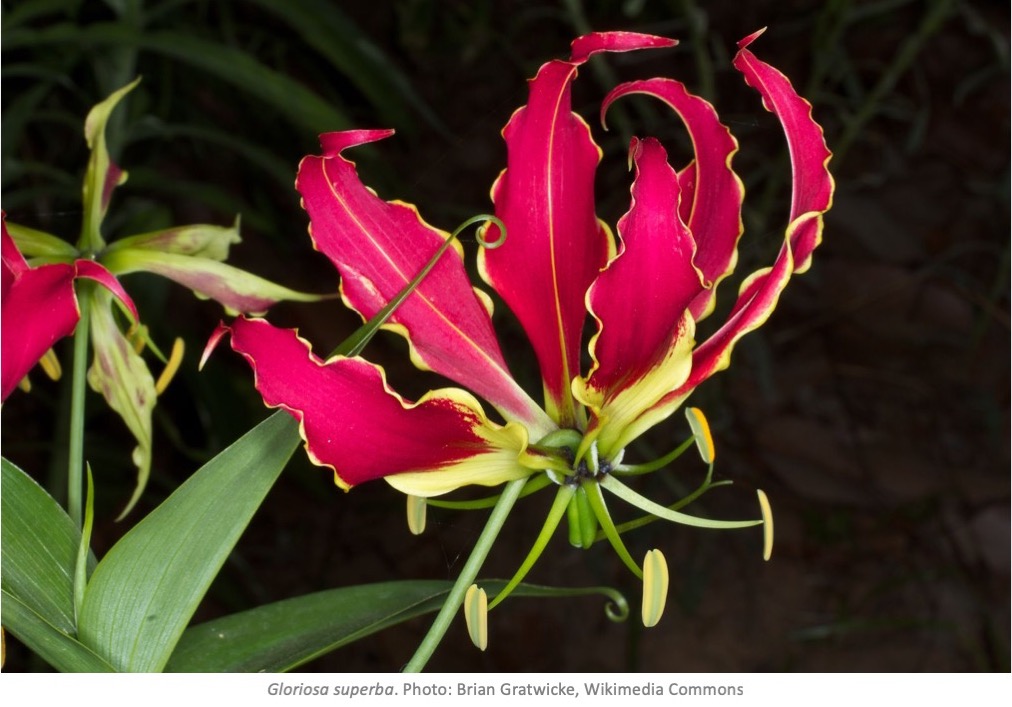 I’ve long admired the beautiful lilylike flowers of the gloriosa lily, also called climbing lily or flame lily (Gloriosa superba, syn. G. rothschildiana), but had failed repeatedly at growing one. Then I learned the secret to successfully growing one, one I’d like to share with my readers.

What Is a Gloriosa Lily?

The gloriosa lily is a climbing plant of the Colchicaceae plant family, meaning it is not actually related to the true lily (Lilium, from the Liliaceae family), even though the flower does look like a Turk’s cap lily, with its wavy red and yellow tepals arching upwards and its long yellow-tipped stamens stretching down and out. Even its narrow lance-shaped leaves are quite lilylike, with one difference: the tip of the leaf is a tendril that grasps onto nearby objects, allowing the plant to climb. Thanks to its tendrils, it can hoist itself to heights as great as 13 feet (4 m), although under my conditions, or perhaps because the variety sold is a smaller-growing selection, the plant only reaches about 5 feet (1.5 m).

The gloriosa lily has a wide distribution in tropical Asia and Africa where it grows under just about every kind of condition: jungle, woodland, grassland and even sand dunes (if it has no support to climb on, it will wander about as a groundcover). It is, in fact, a weed in many areas.

Be forewarned that the gloriosa lily is a highly toxic plant, notably containing colchicine, and should never be consumed. (Oddly, I failed to find even one supplier of tubers who mentioned this!) What exactly you would want to eat, I’m not sure. Certainly, my dog and cat paid no attention to it whatsoever. In India and Africa, it’s grown as a medicinal plant … but don’t try that at home!

Finding a viable tube is the key to success.

For years, I kept buying gloriosa lily tubers (actually tuberous rhizomes), usually at fairs and flower shows, where there always seems to be a stand or two selling flower bulbs. I diligently potted them up but nothing ever sprouted. Then one year, as I reached for yet another tuber to try again, I noticed something curious: one of the tubers in the bin (and only one) had a bit of green growth at the tip. The others had nothing: indeed, one would be hard-pressed to tell which end went up. So, I bought that one. Eureka! When I potted it up, soon green growth appeared above ground and up it went. By midsummer, it was in beautiful bloom and it flowered for over 6 weeks.

All those years, I’d been buying damaged tubers, ones where the growing point had been knocked or cut off, rendering them unsproutable, and no salesperson ever mentioned the problem. These are called blind tubers. I suspect that damaged tubers that will never grow are shipped to unscrupulous or uniformed salespeople while the quality ones go to companies that actually guarantee results. And the growing point is very fragile. Be careful not knock it off or you can kiss your gloriosa lily goodbye!

I’m sure legitimate mail order dealers are careful to sell only healthy tubers, so you’d to best to deal with them. Besides, they do guarantee results: if they deliver blind tubers, ask for a reimbursement!

Gloriosa lily tubers also show up in local garden centers (usually in late March or April in the Northern Hemisphere, October or November in the Southern one), sealed in aerated plastic bags, sometimes surrounded by peat moss or wood shavings. In my experience, most of these are blind, although there are a few that have healthy buds. So, look very carefully before you buy, pushing the bag’s filling this way and that to make sure the tuber has a bud.

As for county fairs and even the famous Philadelphia Flower Show, where gloriosa tubers are often sold, your chances of coming across a viable tuber are slim to none. They simply aren’t places where you can count on getting quality bulbs… indeed, of any kind!

Actually growing gloriosa lily is a snap once you have a viable tuber. It really requires no special care that you couldn’t probably figure out on your own, but I’ll take it easy on you anyway and give you a few tips.

Unless you garden in a tropical or subtropical climate (zones 9 to 12), you’d do best to grow gloriosa lilies in a pot. That’s because they’ll have to come indoors for the winter and the tubers are fragile. If you grow them in a pot, even a pot you sink into the ground, the chances of getting them indoors intact are excellent. If you dig them out of the garden, not as much so.

Also, they seem to need a bit of heat in the spring to get started, something which, in most climates, you can best give indoors in a pot.

Whether you buy them locally or order them by mail, the tubers are usually available in spring for summer flowering. You can pot them up as soon as they arrive. Don’t delay too long: you don’t want the tuber to shrivel.

You’ll need a fairly wide pot, as the cigar-shaped tubers take up a lot of space. In a really large pot (1 foot/30 cm or so), you could include two or more tubers.

Fill the pot two-thirds full of your favorite potting mix, mix in a bit of all-purpose slow-release fertilizer and set the tuber on the mix, on its side or with the upper part (the one with the bud at the end) angled somewhat upwards. Cover with mix and water well. Put in a warm spot until growth appears.

When it does sprout and if it’s not yet in a sunny spot, move it to one. Add stakes for it to start to climb on. Keep watering as needed, giving it a good soaking whenever the mix is dry. The clingy leaf tips ought to find their support on their own: if not, gently nudge them in the right direction. If you don’t trust the tendrils to cling to their support their own, you can fix the stems to their support with twist ties, but be careful: the stems are fragile.

When there is no risk of frost and the air outdoors has warmed up, move the pot outside, acclimatizing it gradually to shade, then partial shade, then, if you can, full sun. Partial sun is acceptable, but you’ll have fewer flowers.

You can set the pot on a deck or table or sink it into the garden. A trellis or some sort of taller staking will likely be needed. I let mine grow up a tall window where the tendrils cling to the screen.

Or leave the pot indoors in the sunniest spot you have: the gloriosa lily makes a great houseplant!

By fall, flowering will be over and the plant will begin to die back. No need to panic, this is normal; your plant is simply going into dormancy. If it’s outdoors, bring it back inside before frost hits. Stop watering and allow the growing mix to dry out completely. Cut back the now dead stems. Place the pot anywhere, sun or shade, for the winter: just make sure you avoid frost. In fact, temperatures above 50°F (10° C) are best. Don’t water while the tuber is dormant.

In spring, the plant will tell you it’s ready to start a new season when you see sprouts poke out above the soil. Start watering and supplying light again, add a bit more fertilizer, and you’re off to the races.

Over time, extra tubers will form and the plant will become fuller. If you need to divide, the best time is late winter, just before the plant usually sprouts. Just knock the plant out of its pot, carefully separate the tubers and replant them, starting the cycle anew. You’ll often find two tubers joined at the base: you can separate them, as the growing point will be at the far end.

Locally, I’ve only ever been able to find the species, with its yellow-edged red flowers, and it is a fine plant indeed. However, there are in fact several cultivars with yellow, red, pink, orange, near white or green flowers, some with extra frilly tepals. Plus, there are other species of Gloriosa whose tubers you might be able to obtain from specialist growers. If not, you may have to grow the latter from seed.

Where to Find Gloriosa Lilies

As mentioned above, I definitely recommend mail order from a reputable company over buying from fly-by-night dealer. Here are a few:

Gloriosa lilies: easy enough to grow… when you start with the right ones!

8 comments on “Success at Last With Gloriosa Lilies”