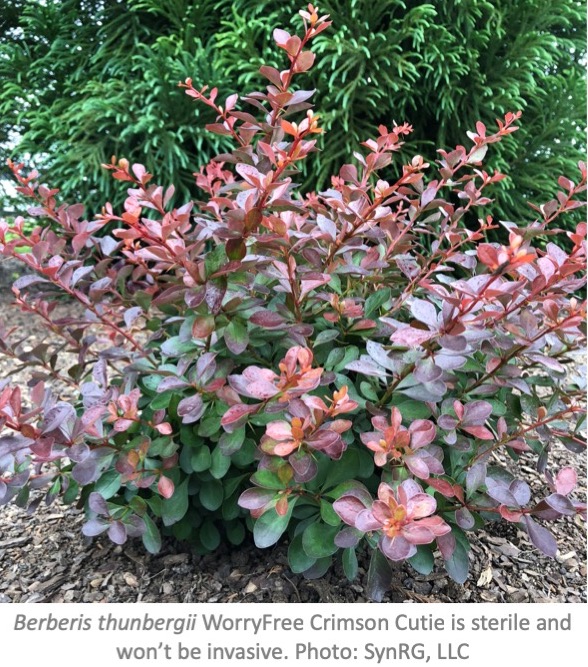 For years now, I’ve been following the development of sterile barberries, that is, varieties of Japanese barberry (Berberis thunbergii) that produce no fertile seed.

Why is this important? Because this popular shrub has escaped from culture in many parts of the Northeastern United States and become invasive, taking over vast tracts of fields and open forest where it forms much of the undergrowth. This is thanks to the seeds contained in its berries that are ingested by birds and spread everywhere in their droppings.

I’ve actually visited such a forest in a nature reserve in New England and was amazed at how abundant Japanese barberry was. It was quite obvious that it was indeed taking over and likely replacing native plants, including food plants for many native animals.

The situation is so serious that Japanese barberries, although long a staple in landscaping, have been banned from sale in Massachusetts and other states are considering following suit.

Sterile Barberries to the Rescue

Dr. Mark Brand of the University of Connecticut has been working on developing sterile barberries for over 15 years now. It’s just not a question of finding a sterile plant, but of testing it, not in only in a greenhouse, but in the field, for both ornamental value and total sterility. Any barberry worth releasing as sterile simply must neverproduce fertile seeds.

But Dr. Brand has indeed found totally sterile clones; in fact, many of them. They produce berries just like any other barberry, but the seed inside aborts at an early stage and so can never germinate.

WorryFree barberries can be used in the landscape without fear their seedlings will escape into the wild. They are such outstanding garden plants—attractive and easy to grow—that they have already been adopted by the Hand Picked For You Plants® plant certification program, designed to recommend only the very best garden plants to home gardeners. And even states have become involved: Crimson Cutie has been approved for sale in New York State by the Department of Environmental Conservation and other environmental associations are considering such an approval.

But Never in Canada

It is, however, unlikely that WorryFree barberries will ever be commercially available in Canada.

That’s because, in 1966, Agriculture Canada banned the sale and distribution of barberries. This ban was due to a wheat disease, black stem wheat rust (Puccinia graminis), that was known to use certain barberries as an alternate host. In other words, the disease necessarily spends part of its life cycle on a barberry plant before moving to nearby fields of wheat. For that reason, all barberries were banned to protect Canada’s wheat crop.

In the years that followed the ban, it was discovered that not all barberries are hosts of wheat rust. In fact, the main culprit is the common barberry (B. vulgaris). The Japanese barberry (B. thunbergii) does not carry the disease. Bans on Japanese barberry were therefore lifted elsewhere in the world, but remain in effect in Canada.

However, after 35 years of pressure from plant nurseries, in 2001 Agriculture Canada finally relented and allowed the sale of 11 cultivars of Japanese barberry that were individually tested and found to be rust-free. They quickly became popular garden shrubs and indeed are already staples in Canadian landscaping.

However, although new and interesting disease-free barberry cultivars (think of the beautiful pillar-shaped varieties ‘Helmond Pillar’, with purple leaves, and Sunjoy Gold Pillar™ (‘Maria’), with golden ones) have since been released, no other barberry has ever been approved for sale in Canada, nor, from what I hear, does Agriculture Canada ever intend to change things. Given the reluctance with which Agriculture Canada has responded in the past to matters concerning ornamental plants, obviously very much the least of its concerns, I don’t expect wider barberry approval will occur in Canada within my lifetime.

Admittedly, the problem may be less serious in Canada than in the United States, as, according to my personal observation, Japanese barberries simply don’t seem to self-sow in cold climates. Thus, although the adult shrubs may thrive in very cold conditions (up to zone 3), there appear to be few seedlings below zone 6 and certainly none in zone 4 where I live. Thus, many Canadian gardeners might not need to be too concerned for now (although with global warming looming…!). Still, southern British Columbia, southern Ontario and milder parts of Nova Scotia are prime candidates for Japanese barberry invasion and I know that the Ontario Invasive Plant Council is very concerned about the species.

So, as the rest of North America switches to sterile barberries for environmental reasons, stodgy old, misguided regulations will likely prevent Canada from following suit.

Environmental damage due to government inaction? Gee whiz, there’s really nothing new under the sun!