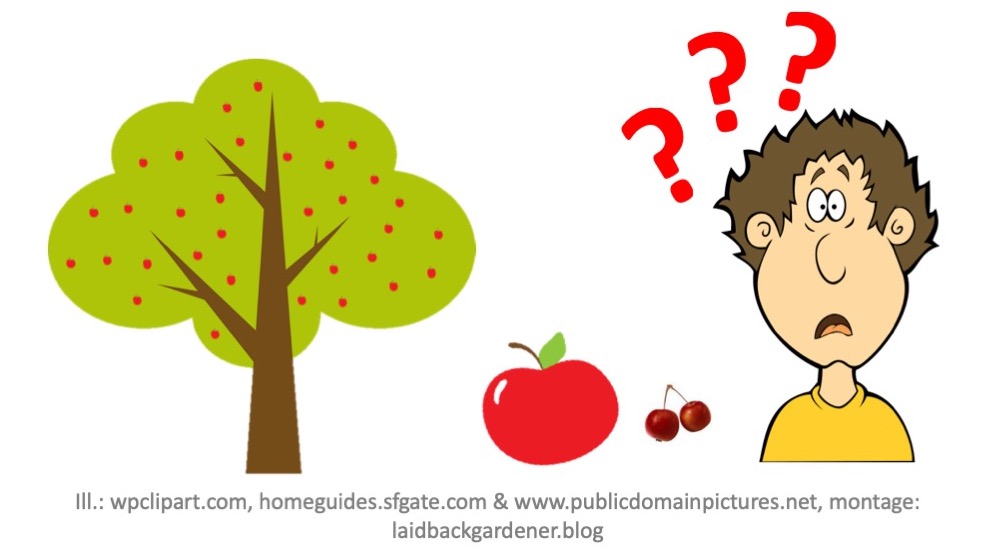 Question: I had to cut down two apple trees a few years ago and new stems came up from the base. I let one of those stems grow back and after several years, it produced flowers and fruits. To my astonishment, though, it only gave crabapples barely 1 inch (2.5 cm) in diameter, while the original tree had big apples. Is this the juvenile form? Will my tree produce full-size fruits one day?

The apple trees we buy are always grafted, that is, their stem was inserted onto another variety, called a rootstock. So, essentially, you bought two trees in one.

The rootstock is inevitably what you’d call a crabapple*, one with small fruit. So, when you cut the original apple tree back, what grew from the base of its trunk was not the apple you wanted, but the rootstock, genetically different from your large-fruited apple tree. When it bloomed, it therefore produced fruits that were normal for it: small apples.

*Crabapples and apples are the same species, Malus pumila. Its humans who decided ones with small fruits are called crabapples and those with large ones, apples.

Juvenile apple trees don’t fruit at all. That’s why it took a few years after your apple tree grew back before it began to flower and produce fruit again. Once an apple is mature enough to bear fruit, it will immediately start producing fruit of the size and appearance of those of a fully adult tree: there are no intermediary stages.

Moreover, you would have experienced the same situation with almost any fruit tree that was cut back to the ground: cherry, plum, pear, etc. They are inevitably produced by grafting and if, unfortunately, the upper part dies, what grows back from the base will be the rootstock variety bearing fruit of lesser interest.

Grafting to the Rescue

You can, of course, dig out your unexpected crabapple tree and replace it with an apple tree of any variety you want, but you could also graft branches of a desirable apple tree onto your crabapple tree, giving it back its original role, that of rootstock. You could even graft several varieties of apple tree onto the same rootstock and thus pick McIntoshes, Lobos and Cortlands from just one tree.

The best time for grafting is in the spring, when the buds begin to swell.

All this goes to prove that you can indeed teach an old apple tree new tricks!