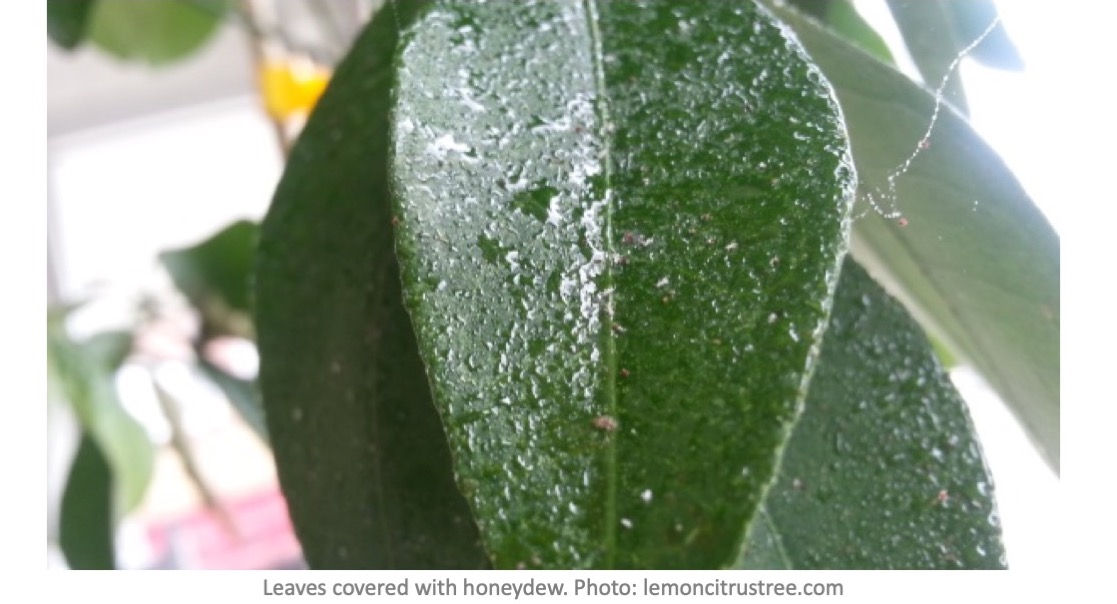 Have you noticed a sticky, shiny substance on the leaves of some of your houseplants? If so, look up, on the same plant or its neighbor. For the sticky stuff is probably honeydew, a substance produced by various sucking insects, including aphids, scale insects and mealybugs. Since the insect ingests enormous quantities of sugar-rich sap, more than it can digest, it must necessarily reject the excess sugary liquid and droplets of this honeydew fall onto leaves below.

This problem can show up on houseplants any time during the year, but is most common in late winter and spring, as many insects, in diapause (near dormancy) in winter, rewaken and begin to proliferate massively with the return of longer days. Soon, there are not only a few drops of honeydew, but sticky liquid everywhere!

The insects responsible for this damage are found on the stems and leaves above, and can be quite unobtrusive, but now that you know where to look for them, you’ll find them without problem. Their honeydew has given them away!

What to do about such an infestation? The most logical thing is to (horror of horrors!) toss the plant and then closely monitor its neighbors for possible signs of future infestation.

You can also treat the plant, but…

Aphids, small plump insects, often green, are “relatively” easy to keep under control. If you wash the plant at the sink with soapy water and a sponge, cloth or soft brush, making sure you reach all its parts, and then rinse it with a strong stream of water, you will get rid of most of them, but if a single aphid remains, the infestation will start all over.

Note that you need to use soap (insecticidal soap, black soap, Ivory soap, etc.) to treat insects, not dishwashing liquid. Most modern dishwashing liquids no longer contain soap and thus are not very effective against insects; plus they can damage soft plant parts.

As for mealybugs and scale insects (actually, close relatives), the same treatment, that is a thorough washing with soapy water followed by a strong jet rinse, is also possible, but even less effective. They often hide in places near but not on the plant, so you never get them all. Thus, they reappear, often months later and the infestation starts anew. And in the meantime, mealybugs and scale may have had time to spread to your other plants.

Even the radical idea of cutting the infested plant to the ground, cleaning the stump with soapy water, then allowing it to grow back is rarely effective. I’ve done this more than once and at first it always seems to be working, then suddenly the scales or mealybugs are back. I just tossed a plant I’d cut back no fewer than three times, yet was never able to truly rid it of scale insects.

There you go! Examine your houseplants occasionally and if you discover sticky, shiny leaves, you’ll know what to do!

0 comments on “Sticky Leaves? Look Up!”