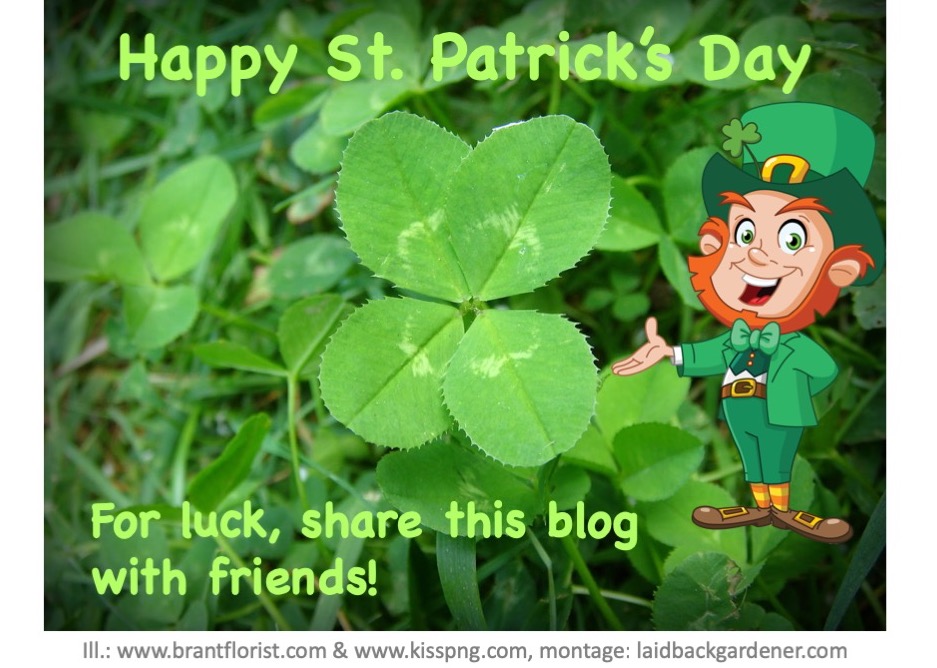 Yes, March 17th is Saint Patrick’s Day, the date of the death of the patron saint of Ireland, Saint Patrick (385–461 BCE). His symbol has always been the shamrock, a 3-leaved* plant of unknown species, but probably a clover (Trifolium). However, if a 3-leaved clover is good, a 4-leaved one is even better, for finding a 4-leaf clover is said to bring good luck.

*Botanically speaking, the three (or four) “leaves” borne on a single petiole are leaflets, not leaves.

The 4-leaf clover is a mutation of the common 3-leaf or white clover (Trifolium repens). Recent studies suggest it’s due to a recessive gene which, in turn, is influenced by growing conditions, so that even a clover bearing the two necessary recessive genes won’t always produce 4 leaves.

One study suggests that 1 in 10,000 clover leaves in a wild population is 4-leaved; another, one in 5,000. Still, in either case, you’d have to be very lucky to find one just by accident.

And even luckier to find a 5-leaf clover … or a 6-leaf one! And both exist.

I used to be very good at finding 4- and 5-leaf clovers as a kid (of course, I did spend much of my time studying the plants at my feet, as I was always looking for mutated varieties) and once found a 7-leaf one. However, the greatest number of leaflets found on a single petiole was 56, discovered by Shigeo Obara Japan on 10 May 2009. I was nowhere near that lucky!

No one really knows why 4-leaf clovers are considered lucky. Probably, just because finding one is so rare.

In Western religious belief, the three leaves on a clover are said to be signs of the three theological virtues: faith, hope and charity. Add one more and you get luck! I don’t know that luck is a virtue per se, but I’ll take it anyway.

Another belief is that the four leaflets represent faith, hope, love and luck. I’ll buy that too! (I’m ever so accommodating!)

Grow Your Own 4-Leaf Clover

But why search for hours on end for 4-leaf clovers when you can grow your own? In fact, cultivated varieties of white clover with 4 or even 5 leaves have been known since the 17th century!

Newer cultivars include the 4 Luck® series, including ‘Green Glow’ (with two-tone green leaves) ‘Red Green’ (with red and green leaves), ‘Coco Mint’ (leaves of red, green and white) and ‘Red Stripes’ (two-tone green with red marks). These don’t seem to be as hardy: certainly they don’t survive the winter in my zone 4 climate.

And there are other varieties with multiple leaflets.

White clover will grow in just about any well-drained soil, in full sun or partial shade, in pots or in the ground and needs no special care. It has white flowers (some cultivars have red ones) and is popular with bees, whence the clover honey sold in many stores. You can even create a 4-leaf clover lawn if you encourage your 4-leaf clover to spread. How lucky is that!

But at Saint Patrick’s Day …

In spite of all the above, I’m really not seeing 4-leaf clovers on sale at Saint Patrick’s Day. Yet, white clover (T. repens) is easy enough to force in greenhouses.

Come on plant nurseries! You’re missing a great business opportunity here. If you figure at least one person in three is superstitious and that “everyone is Irish on Saint Patrick’s Day,” that means there are about 2 billion potential clients out there! Where else are you going to find that kind of opportunity?