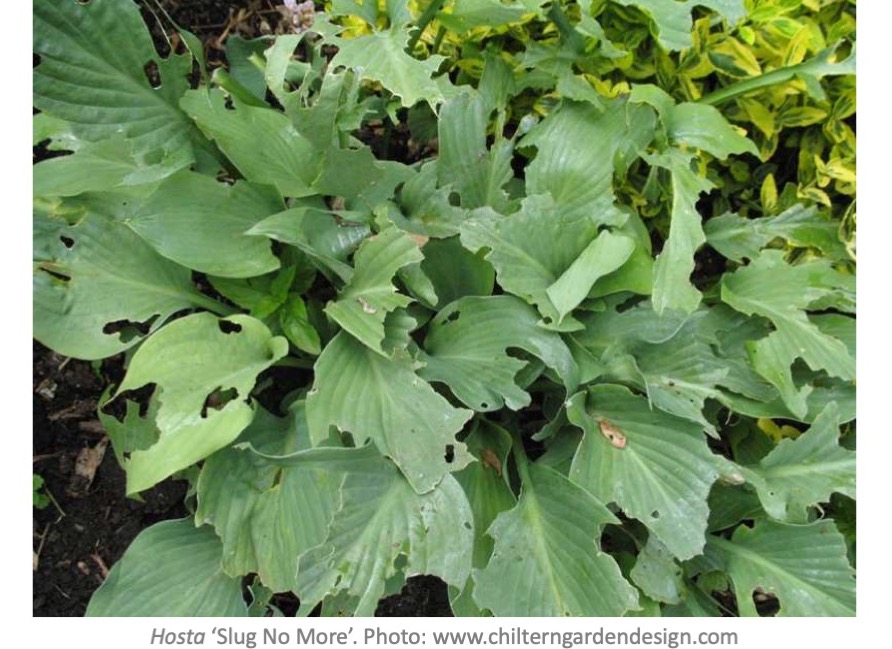 At the Vietnamese Hosta Society annual symposium held last week in Ho Chi Minh City, hosta hybridizer Ngày Nói Dối launched a new hosta that will attract and kill slugs. ‘Slug No More’ is the cultivar name of this plant now in pre-release. It will attract slugs and garden snails from up to 100 m from the host plant, but when gastropods try to eat the leaves, they’re quickly killed.

This nearly 25-year quest began with Nói Dối, a research chemist by formation, seeking the chemical substance that caused certain hostas to be so attractive to slugs. From the hostas ‘Undulata’ and ‘Undulata Albomarginata’, she was able to isolate limaxamine, a chemical that slugs and garden snails simply can’t resist. Through careful crossing, she was able to boost the percentage of limaxamine up to five times the normal amount in test plants. Unfortunately, the plants were immediately destroyed by slugs when planted outdoors and could only be maintained under laboratory conditions.

She then looked at slug-resistant hostas and discovered that some contained a chemical poisonous to slugs, a glycoside saponin she has called limotoxin C, first isolated from the Hosta ‘Invincible’. Augmenting this chemical through hybridization proved to be more difficult and it took nearly 15 years of crossing to create hosta cultivars with a sufficient amount to limotoxin C to be fatal to slugs.

That done, she crossed the two lines, finally developing ‘Slug No More’ in 2014. The cultivar has proved amenable to tissue culture and limited distribution is under way.

More about ‘Slug No More’

The new hosta ‘Slug No More’ is a thin-leaved, medium green hosta about 18 inches (45 cm) in diameter and 14 inches (35 cm) in height bearing pale lavender flowers in mid-summer.

It attracts slugs from long distances, up to 100 m under certain conditions. They bite into a leaf, then crawl a short distance away, dying within 50 minutes. Often hundreds of dead slugs will be found near a single plant recently planted out, but these are soon cleaned up by animals such as carab beetles, toads and birds. Slug predators seem unharmed by the dead slugs and baby Japanese robins and ground beetles fed exclusively on hosta-killed slugs grew to maturity without difficulty.

Slug populations near the ‘Slug No More’ hosta are usually eliminated within two weeks of planting out, allowing gardeners to grow slug-sensitive plants such as lettuce, strawberries, cabbages and other hostas without problems, although there is sometimes a resurgence towards the end of the summer during rainy years, resurgence quickly controlled when the new slugs begin to eat ‘Slug No More’ hosta leaves.

‘Slug No More’ hosta requires typical hosta culture, growing most vigorously in partial shade, but tolerant of deep shade, even full sun in cool summer areas. It prefers fairly moist soil and may need irrigation in dry climates. It will grow in USDA hardiness zones 3 to 8, although it can also be grown as an annual in tropical climates.

This hosta is not poisonous to humans, but the bitter taste of the limotoxin C it contains means it is not considered edible either. Like all hostas, it is slightly poisonous to pets, but the bitter taste of this cultivar is expected to dissuade them from eating the leaves. It is likewise proving to be resistant to deer and rabbit damage. Preliminary studies show they start to nibble on the plant, then quickly learn to avoid it.

‘Slug No More’, the hosta that will make growing hostas possible again, even in rainy climates.

A limited number of ‘Slug No More’ hostas will be available this year from April Fool’s Nursery.

4 comments on “Finally, A Slug-Killing Hosta!”