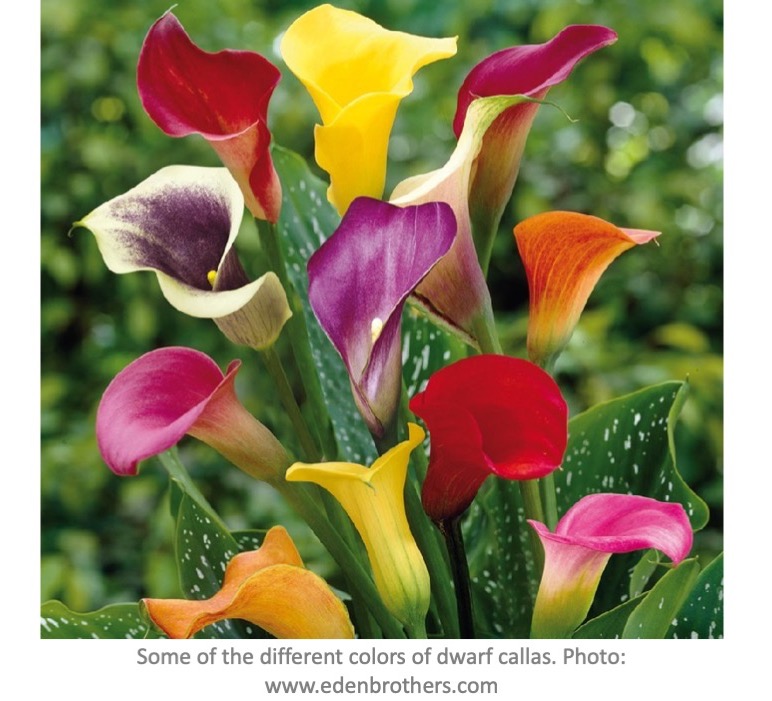 Calla lilies (Zantedeschia spp.), which I’ll just call callas in this article, have come a long way since I first started growing them 40 years ago. At the time, all I could find were the species: the big, blustery, great white calla (Zantedeschia aethiopica), with huge white flowers and big arrow-shaped leaves on a plant 4 feet (1.2 m) or more tall or the yellow calla (Z. ellottiana), a much more diminutive plant with narrower yellow flowers and white-spotted leaves*.

*Callas bearing translucent white dots are said to be maculate; those without dots, immaculate.

These days, though, all the local stores offer are dwarf callas, most only 1 to 2 feet (30 to 60 cm) tall. These are hybrid varieties with fairly narrow flowers and often narrower leaves as well, sometimes lanceolate, with or without white spots. The flowers come in a wide range of colors including white, pink, yellow, orange, red, purple and near black, plus bicolors. These are hybrids involving various Zantedeschia species like Z. elliotiana, Z. rehmannii, Z. jucunda and Z. albomaculata.

Hybrid callas were originally developed for the cut flower trade, then only belatedly did some growers realize there might be some potential for them as garden plants.

Although often called calla lilies, callas are not lilies, of course. Native to Africa, they belong to the Araceae family (philodendron family) not the Liliaceae (lily family). They get the common name because Linnaeus originally classed them in the genus Calla due to their similar appearance to the much hardier marsh calla or bog arum (Calla palustris), but were later moved to the genus Zantedeschia, named for the Italian botanist Giovanni Zantedeschi, in 1826. Since no one wanted to even guess at how to pronounce zantedeschia, the name calla stuck.

The inflorescence is composed of a showy leaflike bract called a spathe wrapped around a central finger-like spadix that bears the true flowers. Oddly, the flowers are monoecious: the plant bears separate male and female inflorescences on the same plant.

The plants grow from underground tubers or rhizomes. Rhizomatous types spread; tuberous types, such as the dwarf hybrids, tend to stay put.

Do note that callas are poisonous due to their high oxalic acid content. Not that many people or pets are poisoned, though, as the burning sensation caused by the first bite causes them to rapidly spit out the offending part. Still, keep them out of reach of children and pets.

Calla leaves produce guttation: drops of sap from their leaf tip that are sometimes mistaken for dew. This apparently helps relieve pressure when water starts to build up in their stems and leaves.

The hardiest calla is the great white calla (Z. aethiopica): it can be grown outdoors year round in hardiness zones 8 to 10 (sometimes 7) as long as the ground doesn’t freeze more than superficially and, in fact, has escaped from culture and become a weed in some mild temperate climates. Consider all the others to be tender plants, to be grown as annuals or brought indoors as tubers to overwinter in cold climates.

Tubers are available in late winter or spring, whenever that is in your area, both in stores and by mail order. If possible, buy larger tubers (size 18- 20 or 20+). They produce more flowers and denser foliage. If you don’t plant them right away, keep them cool and dry.

You can start the tubers indoors, but no more than a month before planting out time; otherwise they’ll start to bloom indoors, probably not what you want. Or plant them directly in the garden. Wait until there is no risk of frost and the ground has warmed to about 65˚C (18˚C) before planting them out.

Hybrid callas prefer fairly warm summers and, in colder climates, will do best in full sun in a spot protected from the wind, although partial shade is quite acceptable where summers are hot. You can grow them in pots (which makes bringing them indoors in the fall simpler) or plant them in flower beds.

Unlike the great white calla, which is essentially a swamp plant and will even grow with its rhizomes under water, the hybrid varieties are subject to rot, especially as they come out of dormancy, so choose a spot with good drainage. Add lots of compost at planting: they like rich, loose soils.

Planting is a snap: just set the tubers about 6 inches (15 cm) apart (half that in containers) and 2 to 4 inches (5 to 8 cm) deep with the eyes pointing up, then cover with soil and water lightly.

Keep them on the dry side until you see shoots appear above the ground, then maintain even moisture. Certainly, don’t allow them to dry out.

In general, callas bloom about 60 to 90 to days after planting, thus from mid-summer to early fall; earlier if you started them indoors. Each tuber can usually produce 5 or 6 flowers.

This is not so simple. I personally have, at best, only modest success when reblooming hybrid callas (the species are much easier in that regard). After all, they were developed to be throw-away plants, one hit wonders: hybridizers never took “reblooming” into consideration as a serious criteria. Often, I just get foliage the second year. Even when they do rebloom, they just never seem to have the vigor and heavy bloom they had the first year. Honestly, it’s simpler to treat them as annuals and let the frost kill them, but if you do want to try and keep them going, here’s what to do.

First, don’t skimp on the fertilizer. Throughout the growing season, fertilize regularly with soluble all-purpose fertilizer to try and plump up the tubers in view of next year’s bloom. Also, remove the flowers as they fade to keep the plant from going to seed.

When the leaves die back in fall (or when frost has killed them), dig up the tubers or, if they are growing in a pot, just bring the whole pot indoors. Cut off the faded foliage and brush off the soil from the loose bulbs.

Callas seem to need a bit of a spell of dry heat to harden off (this is called curing), so leave pots or tubers in a warm, dry spot like a garage or tool shed for a week or so, then move them to a cool (50–60˚F/10–16˚C), dry storage area for the winter. Loose tubers can be stored in vermiculite or peat or wrapped in newspaper. As for pots, simply pile them together.

Check the tubers monthly and lightly spritz them with water if they seem to be shriveling. If the tubers are kept in pots, water just enough so the growing mix doesn’t dry out entirely.

Then in late spring, start all over.

0 comments on “Hybrid Callas in a Cold Climate”