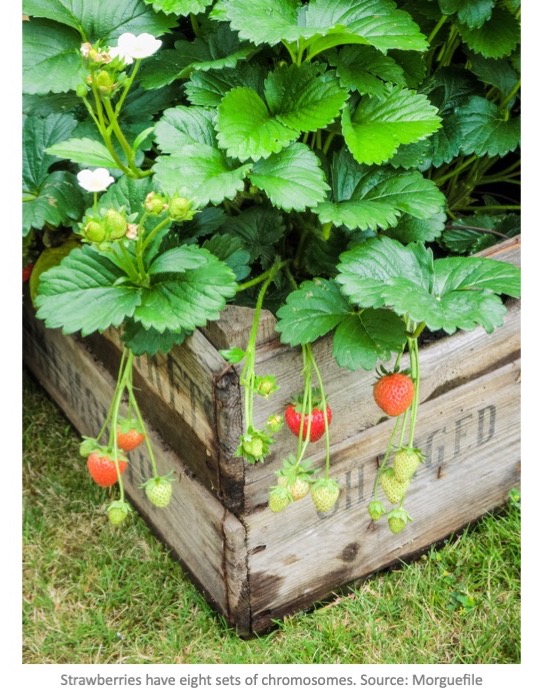 It should come as no surprise that plants are weird and different, even when it comes to their chromosomes. Plants can have multiple sets of chromosomes, which is called polyploidy. Many of your favorite fruits and vegetables are polyploids, and this makes them even more delicious. Polyploidy can occur naturally, where wild species “add together” their DNA. Two good examples of this are wheat and strawberries. Wheat is a hexaploid, which means it has six sets of chromosomes, and strawberries are octoploids—you guessed it—eight sets!

In addition to seedless watermelons, bananas are probably the most common triploid food you eat. The next time you eat a banana, look for the small black specks in the middle of the fruit—these are the sterile seeds. Farmers do not have to buy new banana seed every year because the banana fruit grows on a plant that sends up a new shoot each season.

Polyploidy is one more tool that scientists can use to learn about the genetics of crop plants. Plant breeders use traditional plant breeding methods to change polyploidy to make improved crops faster and more efficiently. Polyploidy can be challenging because there are so many more chromosomes to work with, but it is another ‘tool’ in our plant breeding toolbox that we use to grow the most healthy, delicious plants!

This blog is sponsored and written by members of the American Society of Agronomy and Crop Science Society of America.

2 comments on “Polyploidy—or How Do We Get Seedless Fruit?”