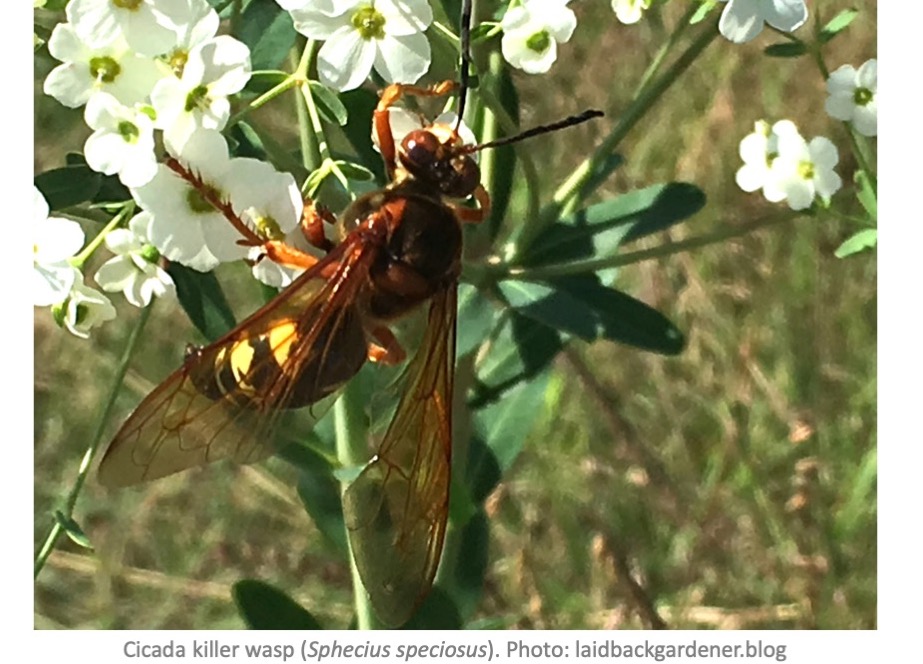 Last summer, during the Garden Communicators International annual symposium in Chicago, Illinois, while visiting vast and fabulous Lincoln Park, I saw what looked to me like a most amazing wasp, far bigger than any I had ever seen. I dared take a close-up with my smartphone, although I wasn’t brave enough to put my hand next to it for comparison.

Big but Not Brutish

It turns out it was a cicada killer wasp, also called a cicada hawk, pretty much harmless to humans. This one was likely the eastern cicada killer (Sphecius speciosus) from eastern North America, but it turns out there are cicada wasps pretty much all over the world … except where I live. (The eastern cicada wasp is apparently present in Southern Ontario, but nowhere else in Canada.) So, while this striking creature was new and surprising to me, perhaps it’s just an everyday insect for other readers.

It’s a robust wasp, black to reddish brown with light-yellow stripes and brownish wings. At up to 5.0 cm (2.0 in) in length, the width of a credit card, that’s nearly 4 times the size of the common social wasps I’m used to.

As the name suggests, it is a predator of cicadas, those big tree-clinging insects whose shrill mating call fills the hot days of summer in so many regions.

The cicada killer is a solitary species, not forming colonies unlike the smaller but exceedingly aggressive social wasps. The female cicada killer stings her cicada prey to paralyze it, then carries it off to her nest, a tunnel dug in the ground in sandy soil. She’ll bring back two to three cicadas if she lays a female egg (females cicada wasps are bigger and need more food), but only one for a male egg, so she somehow knows the sex of her offspring ahead of time. The larva feeds on the still living but unmoving cicadas, then pupates underground in fall, emerging the following year.

There is only one generation per year.

Scary Looking, But Not Agressive

Female cicada killers will not sting humans unless they feel they’re under attack. Apparently, their sting is fairly painless. Males don’t sting at all, having no stinger.

I saw “my” cicada killer in a wildflower called flowering spurge (Euphorbia corollata) where it was obviously feeding. It turns out that, when it’s not killing cicadas, it’s a pollinator, therefore beneficial to gardeners. And since cicadas are considered enemies to trees, the wasp is doubly useful.

So, fierce in appearance because of its size and yellow stripes, but harmless to people and even useful to our gardens: the cicada killer. Just one more of Mother Nature’s fascinating creatures!