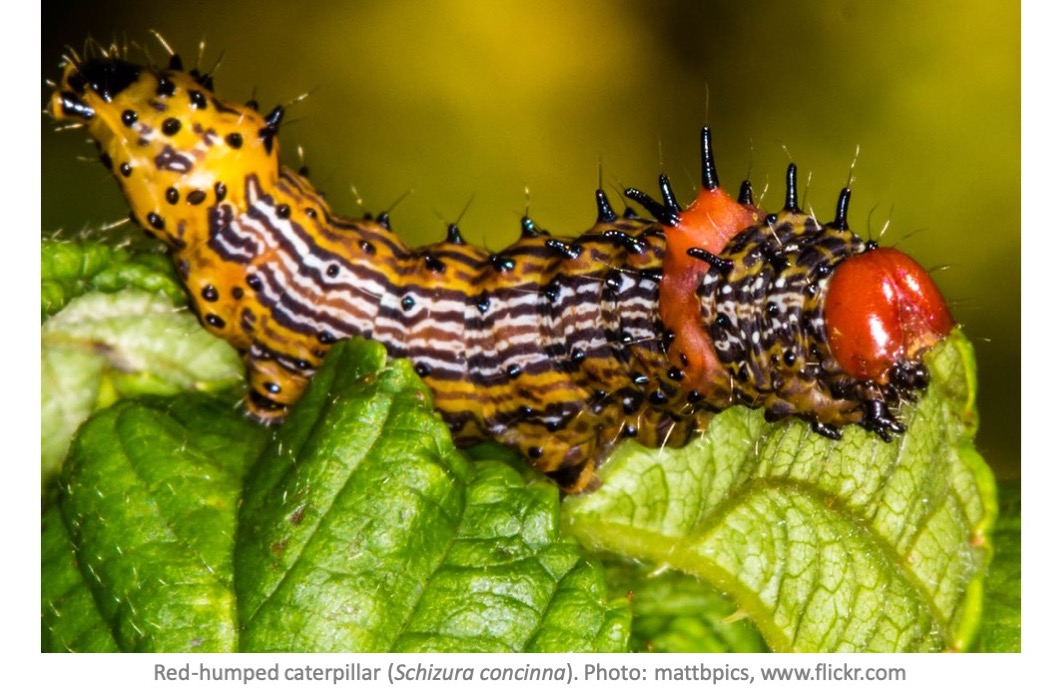 Question: My tree is full of caterpillars. Can you identify them? And what should I do about them? I suspect I’m too late, though. My tree has almost no leaves left and I’m pretty sure it’s a goner.

Answer: Don’t give up too quickly! Your tree will probably be fine. But first, a word about this quite unusual-looking pest:

Your leaf eater is a red humpback caterpillar (Schizura concinna), a species that attacks a whole range of trees (maples, poplars, willows, elms, cherries, apple trees and many more). The female moth, an unobtrusive brown one that is rarely seen and only lives for a week or so in the spring, lays some 25 to 100 eggs under a leaf, which explains why you’re seeing so many caterpillars at once.

The red humpback caterpillar is strikingly colored: yellow lined with white and black with flanks dotted with black protrusions and double row of black spines along its back. The head is black in young specimens, but turns bright red later. And the most striking trait—the one which earned it its common name—the red hump behind its head, is most visible in the later stages of the caterpillar’s development.

These caterpillars are very gregarious at first and can be seen munching on a single leaf together, but later they become more independent and scatter over much of the tree.

Very often, by the time you notice the presence of these caterpillars, the damage is already pretty much done and little comes of treating them. On the other hand, if you catch the attack early in the season, while the tree still has enough intact foliage to be worth saving, you can control the caterpillars with an application of Btk (Bacillus thuringiensis kurstaki), a biological insecticide. After they have eaten the sprayed leaves, ingesting the Btk, it will make them sick and they’ll stop eating first, then they’ll die.

On the other hand, if you only notice the caterpillars at the end of the summer, watch how they react before you spray. If you can’t see them nibbling on leaves, they may have already stopped eating for the season. They do this in preparation for winter and shortly after will drop to the ground to pupate. And if they’ve stopped eating, Btk will be of no use.

There is only one cycle per year, at least in the temperate regions.

Avoid touching these caterpillars. When they feel threatened, they emit jets of a smelly and irritating liquid to discourage predators. If it gets in your eyes, it’s not only painful, but can blind you temporarily.

Next spring, the pupae will give rise to winged moths that fly off looking for a suitable host for the next generation. The same tree is almost never attacked twice and indeed, the red humpback caterpillar is not something most gardeners see very often. This may well have been a once-in-a-lifetime experience!

Of course, defoliation always looks very serious, leaving the tree with skeletonized leaves or even almost no leaves at all. In fact, though, it’s a fairly common occurrence in nature and trees adapt to it quite well. Your tree will soon produce new contingent of fresh leaves and … well, life just goes on. Unless defoliation occurs regularly on the same tree (unlikely with this pest, as mentioned) or it was already in bad shape for some reason, recovery is pretty much guaranteed. You might simply want to give it a bit more TLC next year to help its recovery: a bit of fertilizer, thorough waterings in case of drought, etc.

The red humpback caterpillar is strictly a North American insect, but there are different caterpillars all over the world with the same modus operandi that can be controlled in the same way.

3 comments on “Quite the Caterpillar!”