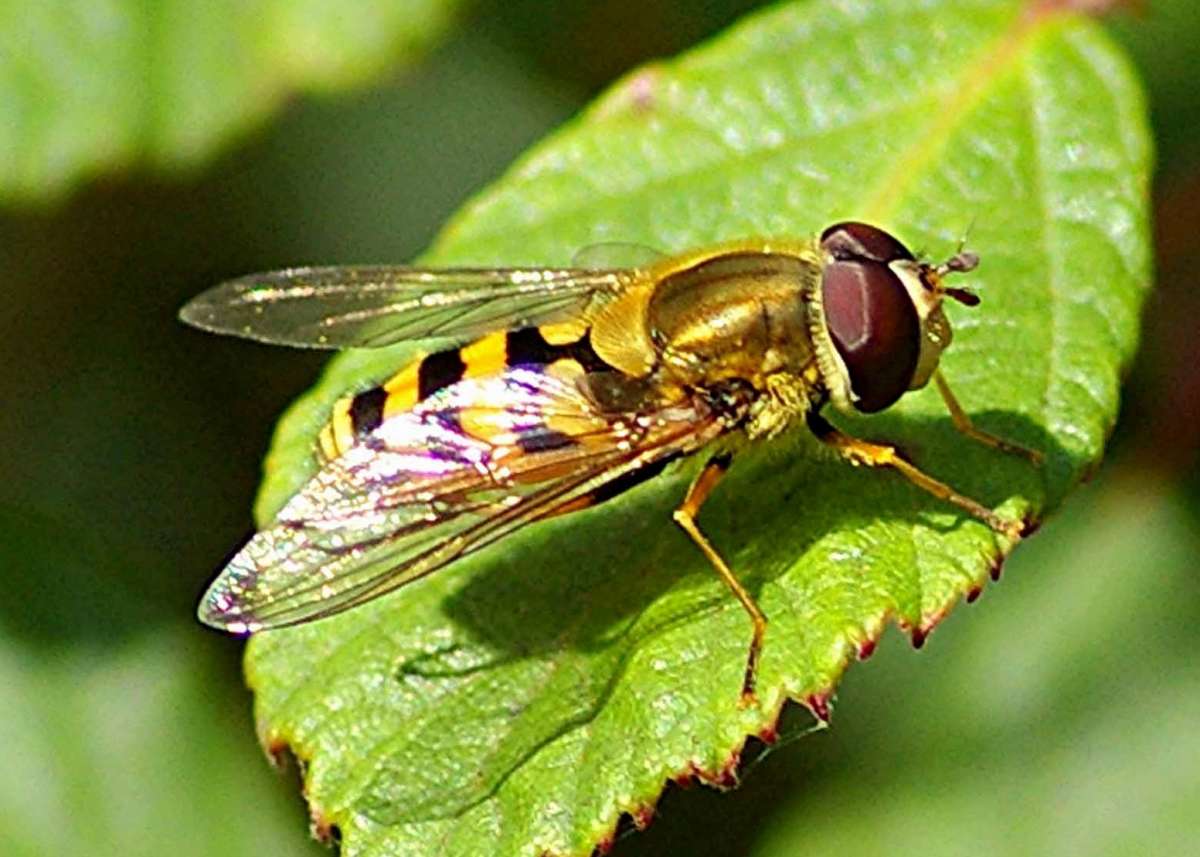 Humans tend to revile flies as annoying, disgusting, disease-carrying, biting pests and indeed, some of them are just that, but if you garden, there is at least one type of fly you need to learn to appreciate: the hoverfly.

There are thousands of species of hoverflies, also called syrphid flies, flower flies and drone flies, all in the insect family Syrphidae. They do what their common name suggests: they hover. While the head of the insect remains absolutely still, the transparent wings beat like mad, allowing the insect to hang in the air: a true little insect helicopter!

Many (but not all) have bodies that are striped yellow and black or brown and gardeners often mistake them for small bees or wasps, but this is mimicry: they’ve adopted beelike colors to confuse their enemies. Hoverflies never bite or sting.

If you look closely, though, you’ll see they have “fly eyes”: huge eyes like those of houseflies that nearly cover their head and often quite unlike the eyes of the bees and wasps they imitate: the latter have eyes that are well separated and are borne on the sides of their head.

There are different hoverflies found all over the world except deserts, extremely high latitudes and altitudes, and Antarctica. There are over 800 species in North America alone and as many, if not more, in Europe. Some tropical countries host over 1000 species! Dozens of different species visit most gardens.

Why They’re Our Friends

Adult hoverflies are pollinators, flitting from flower to flower, feeding on nectar and pollen. To compensate for this theft, they carry pollen and thus help pollinate plants. They’re believed to carry less pollen per trip than bees, but then, they make more flower visits, so are often just as efficient.

Their short mouth parts make them poor pollinators of tubular flowers: they prefer open flowers and are fond of plants in the Asteraceae (sunflower family), Rosaceae (rose family) and, especially, Apiaceae (carrot family). They’ll pollinate flowers of any color, but are especially attracted to yellow and white flowers. Scented flowers also attract them. Most hoverflies are generalists and will visit a wide range of flowers, but some are specialist pollinators. Cheilosia albitarsis, for example, only visits buttercups (Ranunculus repens).

So much for the adults, but many of the larvae are also useful. Now, there are species whose larvae are detritivores (eating decaying plant or animal matter) and others are aquatic, but many are insectivores: they feed on harmful insects, including leafhoppers, thrips and, especially, aphids. Indeed, some hoverfly species are being studied for use as a biological control of plant pests. Typically, female hoverflies lay their eggs near a colony of their favorite pest insect and when their often slug-like larvae hatch a few days later, they begin chowing down.

Hoverfly larvae retreat into a cocoon at the end of their feeding frenzy, then hatch into adult flies 10 or so days later. There are several to many generations per summer, depending in the species and the local climate.

Hoverflies will visit most gardens on their own if there are plenty of flowers and you don’t spray with insecticides, but some flowers attract them more than others. Often gardeners plant species such as bachelor’s buttons, buckwheat, chamomile, coriander, garlic chives, marigold, oregano, phacelia, sweet alyssum, tansy and yarrow as companion plants in or near vegetable beds to ensure the presence of hoverflies and other pollinators.

Hoverflies: the best gardening friend you never knew you had!

3 comments on “One Fly Gardeners Should Learn to Appreciate”