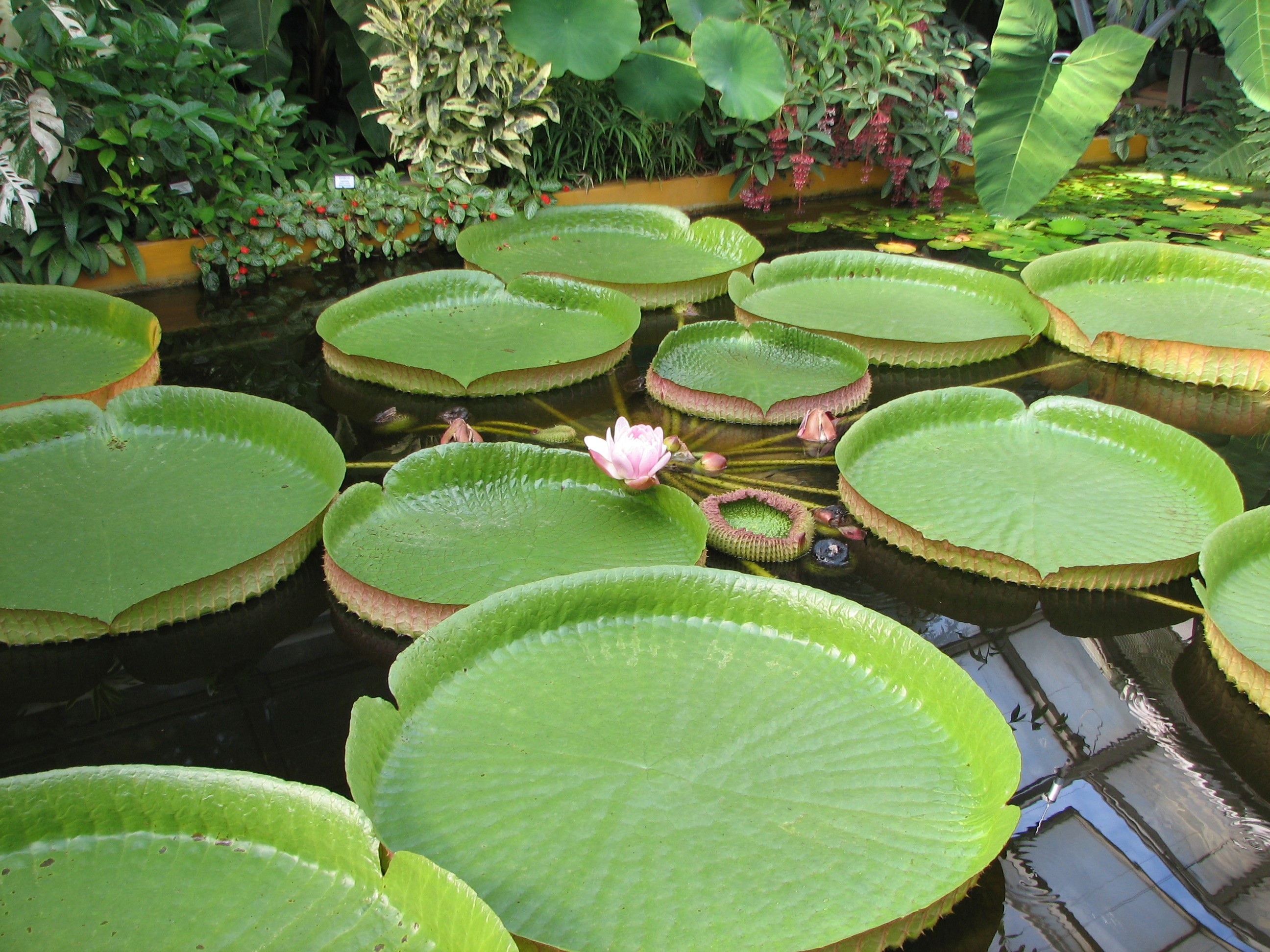 I’ve just come back from the freshly renovated water garden at the Montreal Botanical Garden which now features a new central pond containing all three species of giant waterlily, also called water platters—Victoria amazonica, V. cruziana and V. ‘Longwood Hybrid’—and who can help but be impressed by the huge size of the leaves: up to 3 meters (9.8 ft) in diameter!

The plants are aquatic, of course, found still waters and bayous of the Amazon basin in the case of V. amazonica and in the Parana-Paraguay basin, also in South America, in the case of V. cruziana. As for V. ‘Longwood Hybrid’, it results from a cross between the two and was, as the name suggests, developed at Longwood Gardens in Pennsylvania … where I saw it in bloom two weeks earlier (yes, I get around!)

The genus was named Victoria in 1837 for the recently crowned Queen Victoria and has become a mainstay in botanical gardens around the world. Often giant waterlilies are grown in a greenhouse, as they need tropical conditions. However, they also can also be grown outdoors in heated ponds, the case both in Montreal and Longwood Gardens.

It’s hard to believe that these giant plants are annuals, but that’s how they’re usually grown in botanical gardens, with new ones started each winter from seed.

The leaves float on the water thanks to surface tension and thick air-filled ribs on the undersides with an intricate highly geometric shape.

The actual leaf blade is paper thin and easily torn, but can nonetheless support the weight of a child … if it is carefully placed on the leaf. (I suggest trying this with some other child than your own.)

The leaves are turned up at the edges to keep water from washing in. However, when that does happen (say due to a splashing animal or rain), there are tiny holes, barely visible, designed to let excess water drain out, keeping the top of the leaf clean and dry.

You can’t help but notice that the sides of the leaves are covered in thorns and if you flipped the leaf over you’d see the bottom of the leaf is likewise dotted with the same nasty prickles. You’d assume that these thorns are designed to protect them from fish or aquatic mammals, but you’d be wrong. According to the docent at Longwood Gardens, the purpose of the thorns is to tear apart competing aquatic plants, shearing them off neatly as the leaf moves in the water, thus reducing competition.

I was really lucky to see flowers in both gardens this year. The huge floating flowers are up to 40 cm (15 inches) in diameter and each plant usually produces only a few per year. Since each individual flower lasts only two days, you have to be there at just the right time!

The life cycle of the flower is fascinating. Each bloom opens in the evening as a giant white flower. It is, at this point, female, with a fertile stigma. The first-night flower gives off an intense perfume rather like pineapple, actually producing heat up to 10˚C warmer than the surrounding air to better diffuse the odor. This attracts tiny scarab beetles (Cyclocephala spp.) that arrive in droves to feed inside on staminodes inside the flower … and also mate. The flower closes during the day, trapping the scarabs inside, but it’s not such a bad prison, as they have plenty to eat and are protected from their enemies. The next evening, the flower opens again, but is now pink to reddish in color and scentless. And it’s become male, with fertile stamens that coat the beetles with pollen as they fly away (they’re not interested in the second-night flower, the staminoids they feed on having dried up by then) … to land directly on the intensely perfumed female flower of another plant and repeat the process. This guarantees cross-pollination.

Where giant water lilies are grown outside South America, the type of scarab necessary for pollination is not available, so the flowers have to be pollinated by hand.

The discovery of the Amazonian giant waterlily (V. amazonica, originally called Victoria regia) by Sir Richard Schomburgk in 1937 caused a frenzy among botanical gardens of the world. Each strove to be the first to grow this exotic plant, but they failed repeatedly.

Eventually, in 1849, seeds sent to Kew Gardens (near London, England), carefully stored in wet clay, germinated, but remained small and failed to bloom. However, Joseph Paxton, head gardener for the sixth Duke of Devonshire at Chatsworth House, considered one of the finest gardens of its day, had recently built a “great conservatory,” a tropical greenhouse to which he added a large specially heated tank. He managed to obtain a young plant from Kew and it positively thrived under his ministrations, with leaves growing to near-record size.

On November 2, 1849. Queen Victoria herself came to Chatsworth see the opening of the first flower ever to bloom outside of South America, to the sound of an orchestra playing God Save the Queen.

The Duke famously placed Paxton’s daughter on a leaf and the resulting drawing appeared in the Illustrated London News on November 14, 1849, causing a media sensation. Botanical gardens and estate gardens around the world began installing waterlily greenhouses with heated ponds and growing giant waterlilies themselves. In fact, giant waterlilies remain stars to this day and you can be sure they regularly appear in media reports around the world.

Giant waterlilies: not something you’ll likely want to grow in your own garden, but certainly a plant you’ll want to take notice of when you visit the great botanical gardens of the world.