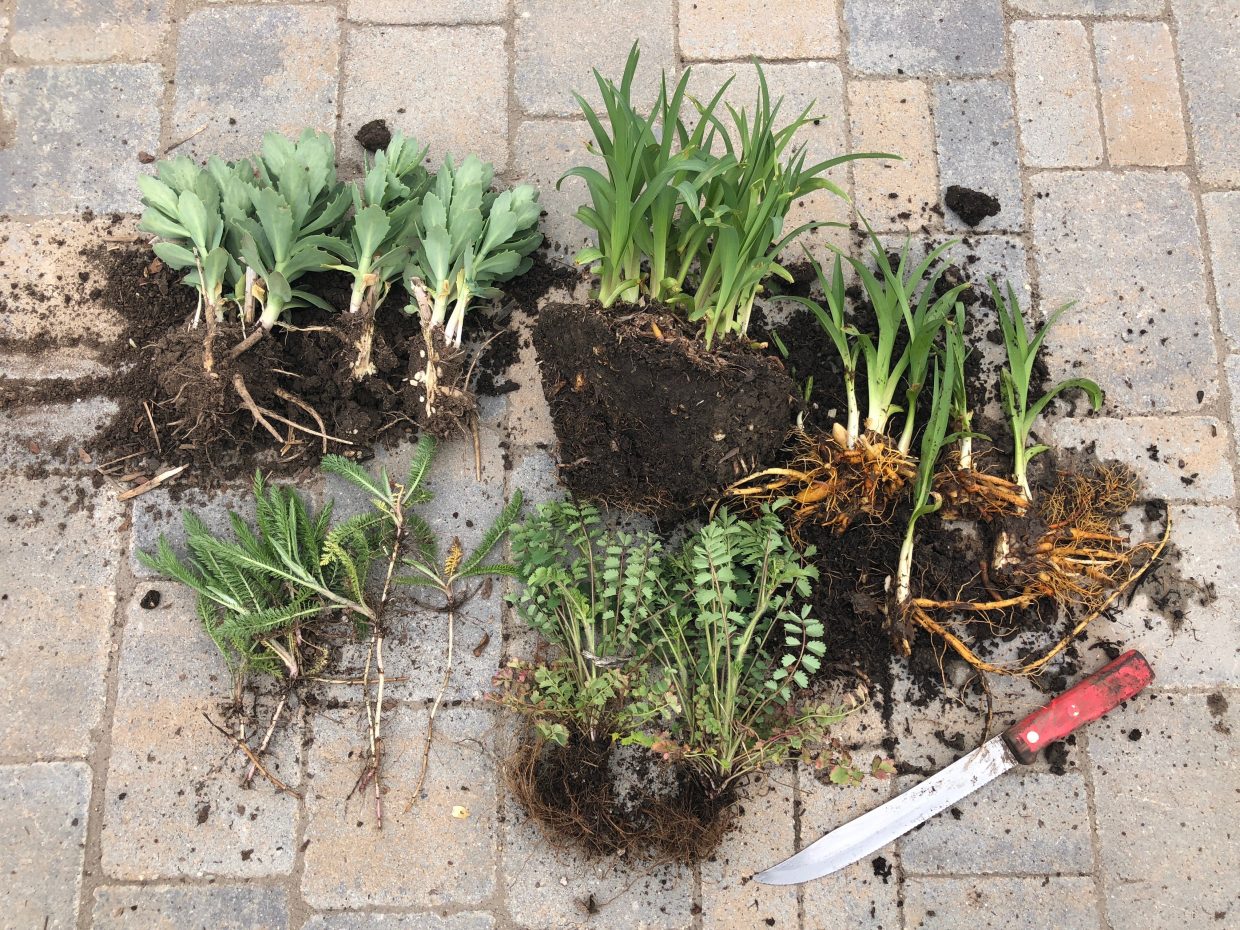 You can divide perennials in spring or fall, but some have prefences. Photo: http://www.steamboatpilot.com

Dividing perennials is something you need to consider doing occasionally, but when to do it is a subject of some discussion among gardeners.

It’s true that, in a pinch, you can divide a perennial in almost any season, but dividing them in the heat of summer is very stressful for the plant … and for you as well! And just forget about dividing them in midwinter in areas where the soil is frozen. As a result, usually gardeners divide their perennials in the early spring, just as they are starting to sprout, or in the fall, in September or October, as they prepare for their winter rest.

However, it isn’t wise to divide a plant while it’s blooming or about to bloom, so, logically, it’s usually best to divide fall-blooming perennials in the spring. That also means the ideal season for dividing spring bloomers and early summer bloomers is in the fall.

As for plants that bloom in midsummer, you can divide them either in spring or fall.

Don’t divide perennials on a whim: you need a good reason

Actually, in spite of the fact that many books and websites insist on the importance of dividing perennials every 3, 4, or 5 years, most really don’t need division. The vast majority of perennials will continue happily on their way, blooming up a storm, as years go by … as long as you keep neighboring plants from invading them. But there are many good reasons why you should consider dividing perennials. Here are the main ones:

Complete Division or Just a Section?

For most perennials, division simply means digging up a clump from the outer rim of the mother plant.

If you just want a single clump to fill in a blank spot or to give as a gift, or if the plant has sent up offshoots, you can leave the mother plant in the ground and simply dig up a section from its outer rim. It’s like slicing a piece of pie: take a sharp shovel or spade, push it into the plant once, twice, then a third time (I always “harvest” from the back, so it won’t be as noticeable) and cut out a chunk of plant with attached roots. Now just replant the section somewhere else and fill in the hole left behind with soil. The plant will soon regrow and you won’t notice the difference. Hostas, for example, are typically divided this way.

Sometimes you do want to dig up the entire plant. Maybe you need multiple divisions or you have to move the plant anyway. Or it’s one of those perennials that are awkward to divide unless you can clearly see where one plant ends and the other begins (peonies are the best example of this).

If so, using a spade or shovel, dig up the entire plant, with as complete a rootball as possible. Now slice through the plant with the spade, cutting it into 2, 3 or 4 sections (or more). If it’s a smaller perennial, you can often just pull the plant into sections with your hands.

In the case of peonies, I suggest rinsing the soil off the rootball and carefully cutting between the different plants, making sure there are 3 or 4 buds on each new division.

Some perennials have a very tough or woody rootball and a spade won’t be enough. If so, use an ax, a sharp knife, or a saw to cut the plant into sections. Many ornamental grasses fall into this category, as well as goatsbeard and even some astilbes.

No matter how you choose to divide your plant, you’ll have to replant each division. Do so without burying the collar (the point where the roots joint the stem) … in other words, plant it at the same depth as was the mother plant.

And after you replant, water well and apply mulch. The young plant will require additional watering during periods of drought until it is well established, usually the following season.

Although in my explanations so far have only covered perennials, the same methods of division also apply to those shrubs that lend themselves to division. Many don’t, producing a dense woody base you can’t divide. But those that produce multiple offsets at the base, or that spread over time, such as the smooth hydrangea (Hydrangea arborescens), including the very popular cultivar ‘Annabelle’, are easy to divide, although an ax is often necessary to separate plants.

Adapted from an article originally published on September 5, 2015.