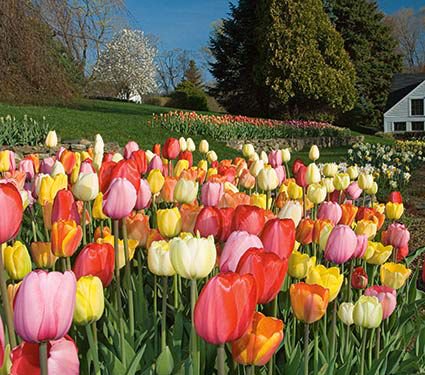 Tulips have the reputation of not being very long-lasting. With most, their bloom decreases from year to year. The first year they flower perfectly, the second, more modestly, with smaller flowers, and the third, even less abundantly with even smaller flowers. Usually, after 4 years, all that comes up are leaves! Fortunately, there is a solution to this problem … but first, an explanation:

Why Are Many Tulips Short-Lived?

In nature, all tulips are perennials. They come back year after year, dividing at their base over time to form clumps like any other perennial. But cultivated tulips were not developed with repeat bloom in mind. Instead, they were created to produce one single but very spectacular flower.

It is important to understand that the majority of tulip bulbs produced in the world are used in the cut flower industry, and this has been the case for over 200 years. All that cut flower growers ask for in a tulip is one single perfect flower on a solid stem. That’s because, after they harvest the flower, they dig out the bulb and compost it, long before it has had time to mature. Then they plant a fresh bulb in its place. That the plant has no staying power is of no concern to them.

So, for generations, tulip breeders have been working on developing tulips that meet the needs of cut flower growers, producing a single but spectacular bloom. The result is that many modern tulips are little more than biennials. This particularly true of Triumph tulips, which are by far the most widely sold tulip bulbs.

But you can grow long-lasting tulips, bulbs that will bloom every year, each time as beautifully as the first, for 5, 10, 15, even 20 years. But to do so, you first need to know how to choose the right bulb.

That’s because some tulips are longer lasting than others. In fact, bulbs in three categories are much more persistent than the others.

These are wild tulips or hybrid tulips closely allied with wild tulips. There are about 75 wild species of tulips and all are true perennials, so it makes sense that botanical tulips would prove to be perennials when they are grown in our gardens.

Of course, the “botanical tulips” we buy are not exactly wild. Most have been in culture for centuries and many so-called botanicals are hybrids and selections, not the wild species itself. (If so, they generally bear cultivar names, such as Tulipa praestans ‘Fusilier’ or T. greigii ‘Toronto’.) Still, they are still very close to the original wild species and are just as perennial.

Of course, not all botanical tulips correspond to our image of a tulip. The majority are small plants, many with short flower stalks (unlike the tall ones of hybrid tulips) and small flowers. In addition, many produce multiple flowers per bulb rather than a single flower. And their leaves can be narrow or wavy-edged unlike the broad leaves of hybrid types. Still, they are true tulips and are very perennial.

Among the botanical tulips that are easy to grow in home gardens are Tulipa kaufmanniana and its hybrids (‘Ancilla’, ‘Concerto’, ‘Johann Strauss’ and many others), T. greigii and it hybrids (‘Cape Cod’,’ Pinnochio’, ‘Toronto’ and many others), T. fosteriana and its hybrids (the ‘Emperor’ series is the most widely grown), T. tarda (sometimes considered a subspecies of T. urumiensis), T. turkestanica and T. praestans. Note that most botanical tulips do not need deep planting to perennialize well: the standard recommendation of 6 inches (15 cm) is generally quite acceptable.

But beware, not all botanical tulips persist well in gardens, at least, not in areas with summer rainfall. Some come from hot climates with dry summers, where no drop of water falls for months and months. These varieties are poor choice as perennial tulips in any climate where rain is likely to occur in summer or in gardens where irrigation is used. I suggest considering these tulips, which includes T. bakeri, T. humilis, and their hybrids, such as T. ‘Lilac Wonder’ and T. ‘Eastern Star’, as annuals.

These are tulips have chlorophyll not only in their leaves like any other tulip, but also in their flower. Thus, the flower is partially green. This somewhat surprising pigmentation gives them an advantage when it comes to storing energy. Since the flower also carries out photosynthesis, like a leaf, the bulb picks up extra reserves and thus tends to bloom again very well … provided you plant it deeply (more on that later).

Some examples of viridiflora tulips are ‘Spring Green’, ‘Greenland’ and ‘Artist’, but there are dozens more.

These tulips are the result of a cross between T. fosteriana and more conventional hybrid tulips. This results in a huge tulip with a large flower and a bulb nearly twice as big as those of other hybrid tulips. Also, Darwin Hybrids inherit the perennial nature of their botanical relative, T. fosteriana. Several bulb catalogs even offer them as “perennial tulips”.

There are dozens of varieties of hybrid Darwin tulips, especially in shades of red, orange, yellow and pink. Examples include: ‘Big Chief’, ‘Red Impression’ and ‘World’s Favourite’. These are the mostly widely available perennial tulips in garden centers. If you see tulips being sold in open boxes with their extra-large bulbs on display for all to see, they’ll almost certainly be Darwin hybrid tulips.

To make viridiflora and Darwin hybrid tulips truly perennial, you also have to plant them deeper than usual: 1 foot (30 cm) deep rather than 6 inches (15 cm), the depth usually recommended. Why? That’s because tulips produce bulbils (small bulbs) at the base of the mother bulb. Producing bulbils tends to undermine mother bulb’s health and energy and, worse yet, the resulting plants crowd the mother bulb. When a bulb is planted extra deep, however, the bulbils are smothered: their burgeoning leaves can’t reach the surface and they die sight unseen, without disturbing the performance of the mother bulb. That allows it to bloom again and again, sometimes for decades.

Also, extra deep planting puts the bulbs out of reach of squirrels: they never dig that deeply into the ground.

Of courses, for tulips to be able to bloom over and over for many years, you have to give them the right conditions. For example, they need full sun or nearly full sun and also rich, well-drained soil. Clay soils are poor choices for perennial tulips: at a depth of 1 foot (30 cm), they are often left sitting in water all winter and that is a recipe for disaster. If your soil is heavy clay, you’ll find your tulips will perennialize best in raised beds.

Also, perennial bulbs are heavy feeders. Fertilize them at planting time with bulb fertilizer and apply mycorrhizae to the soil for better root growth. And apply fertilizer or compost in the spring just as they stop blooming.

In the Northern Hemisphere, you can plant your perennial tulip bulbs anytime between early September and late November.