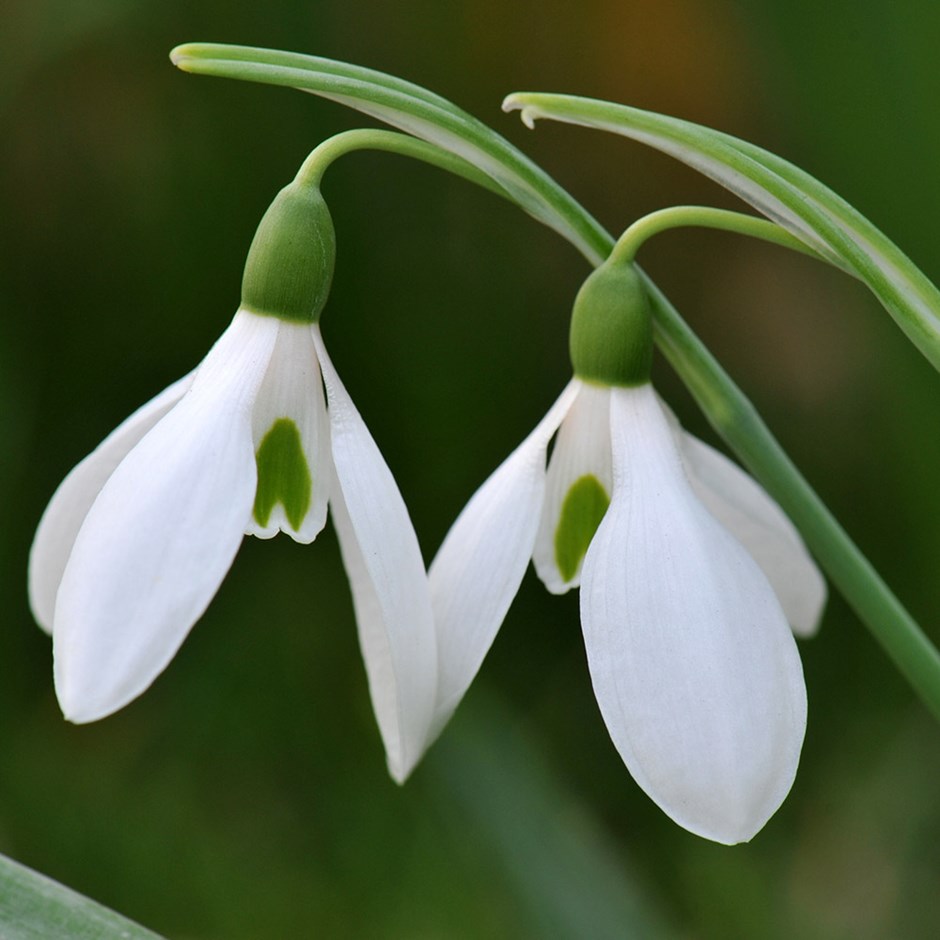 Go to any garden center in the fall and you’ll see an almost endless display of bags and boxes of spring-blooming bulbs: tulips, narcissi, hyacinths, etc. Tall bulbs and short bulbs, early bulbs and late bulbs, bulbs with single flowers and with double ones … and they come in all the colors of the rainbow. These popular plants will help ensure non-stop bloom from the end of winter to the beginning of summer. All you have to do is to plant them in the fall: dig, drop, done!

But there are also, in the same displays, slightly less conspicuous bulbs, with somewhat more modest colors, that are not as well known to gardeners. But being a bit obscure doesn’t make them any less interesting. And one of these “neglected bulbs” is the snowdrop, perhaps the earliest bulb of all.

Tiny, But It Gets Around!

The name “snowdrop” refers to any plant in the genus Galanthus, a group of about 20 fairly similar bulbous plants, all from Europe or Asia. The most commonly cultivated species is the common snowdrop, Galanthus nivalis, native to Europe. It is, in fact, one of the most widely distributed plants of the whole continent, renowned for forming carpets of white in fields and forests in earliest spring, at snow melt.

The name Galanthus comes from the Greek from gala (milk), and anthis (flower), a reference to the milky white color of the flower. It produces a “true bulb,” like a little onion. It’s usually planted in the fall. Then the plant grows under the snow during the winter and thus is ready to bloom as soon as the ground thaws, hence its common name: snowdrop. Indeed, in many climates, it really is the first flower of the spring, often blooming with snow all around it!

In Europe, snowdrops are often considered winter bloomers, because they usually flower very early, in January or February. In climatically challenged Quebec, where I live, flowering usually takes place in April or even May, but sometimes begins at the end of March … right up against the foundation of my house where the snow melts early. It’s one of the longest-blooming spring bulbs, lasting 3 weeks and more. The colder the spring, the longer the blooms hold.

Don’t confuse snowdrops (genus Galanthus) with snowflakes (genus Leucojum). They’re close relatives, both in the Amaryllidoideae subfamily of the Amaryllidaceae family, but quite different when you look at them closely. Snowdrops bear three outward-extending white sepals, like a propellor, with a white and green crown tucked underneath, while the snowflake’s 6 tepals form a cup with a green dot at the end of each. In addition, snowflakes are larger plants and bloom later in the season than snowdrops.

Using the common snowdrop as an example, expect a very simple plant: each bulb produces only 2 narrow grasslike leaves that appear with the flowers. The leaves continue to grow a bit after flowering, reaching 6 inches (15 cm) in length. The single flower is carried on an arching stem about 4 inches (10 cm) high and hangs on a thin pedicel. It is composed of an oval green ovary that ends in three pure white outward stretching sepals and a shorter inner crown (composed, in fact, of three petals set very close together) and often not very visible when the flower is seen from above. The crown is white with green markings at the tip.

The bulb divides annually and therefore, after a few years, what was originally a single bulb becomes a clump that slowly gets bigger and bigger. Thus, the effect improves over time. Snowdrops are very long-lived: in fact, unless disturbed, they’re essentially eternal!

Snowdrops are rarely affected by predators: even squirrels, so fond of tulip bulbs, avoid them and so much the better for them, because snowdrop bulbs are toxic.

Despite this toxicity, snowdrops have been used medicinally for centuries and are presently under study for possible use in treating Alzheimer’s disease. Do not try them at home, though! There’s a fine line between treating patients and poisoning them.

Plant snowdrops as soon as they arrive in stores in September and certainly before mid-October. They tend to dry out and die if left sitting too long in a garden center display.

Snowdrops will thrive in any well-drained soil as long as they receive a fair amount of sun in the spring. They will grow readily under deciduous trees and in wooded areas, being totally indifferent to even dense summer shade, because its foliage will already be turning yellow and disappearing before the leaves above begin to unfold. They naturalize well in lawns, fields and forests in hardiness zones 3 to 8. Their need for winter cold precludes their use in very warm climates.

Snowdrops self-sow abundantly. Well, at least that’s what everyone tells me. But they don’t under my conditions. While squills (Scilla siberica, S. bifolia, S. mischtschenkoana and others), glories of the snow (different species of Chionodoxa), fumeworts (Corydalis solida) and puschkinias (Puschkinia scilloides) multiply like crazy in my flower beds and my lawn, snowdrops just remain where I planted them, forming thicker clumps. To obtain more, I have to multiply them by division, easy enough to do when the foliage turns yellow in late spring. Just dig them up, separate the bulbs and replant them. (No, you don’t have to store the bulbs dry until the fall before planting them: that will likely kill them.)

After the initial planting, essentially no care is needed for snowdrops. You don’t have to water or fertilize them nor even deadhead them. Even their leaves go from yellow to gone in no time.

You can use snowdrops to produce the first bouquets of the year. True, the stems aren’t very long, but they are harvestable. And that way you’ll discover that the flowers are sweetly scented, a detail that usually escapes you when they’re at ground level, far from your nostrils.

The different species of snowdrops are very similar and if you’re an average gardener just looking for some easy early spring color, any variety you can find will do quite nicely.

The common snowdrop (G. nivalis) is indeed the most commonly offered variety. And there is a double-flowered variety of the common snowdrop called G. nivalis ‘Flore-Pleno’ that you might find interesting (although, given the flower’s downward facing habit, its doubleness is not all that evident unless you plant it on a slope at eye level).

Sometimes I see G. woronowii in stores. It’s about the size of the common snowdrop, but with wider leaves.

The other commonly available species is G. elwesii, called the giant snowdrop. At only about 8 inches (20 cm) tall, it’s really not much of a giant, but it is twice the size of the common snowdrop.

Then there are the “collector’s items”: rarer, more expensive snowdrops that galanthophiles—serious snowdrop collectors, and they’re more numerous than you’d think!—really appreciate. These bulbs—varieties like ‘Dionysus’, ‘Hippolyta’, ‘Magnet’, ‘Mount Everest’ and ‘Wendy’s Gold’ —, are much harder to find. You’ll have to order them by mail.

Where the Bulbs Are

Your local garden center probably carries a snowdrop or two in its bulb inventory and, if not, your favorite bulb catalogue certainly does. A quick search on the Internet will bring up several places where you can order them.

As for galanthophiles, you probably already know who to go to for a quick snowdrop fix. If not, here are a few sources:

The snowdrops: easy to grow, inexpensive and the results are practically guaranteed. What more could you ask for in a spring-flowering bulb?

1 comment on “Plant Snowdrops for the First Flowers of Spring”