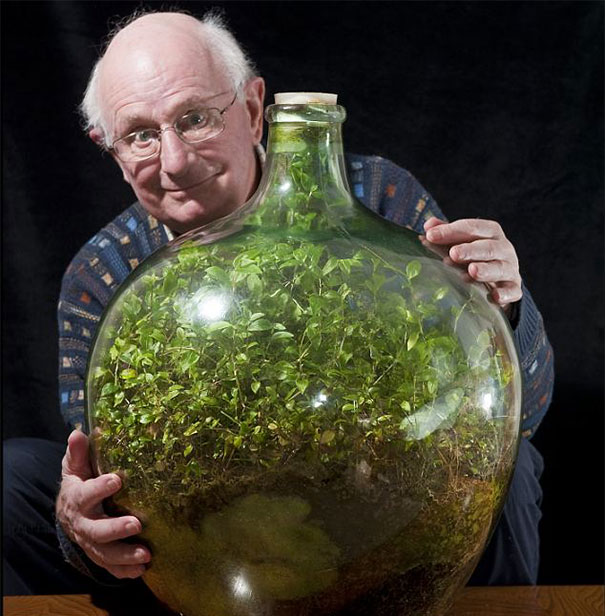 I am the proud owner of what I believe may be the world’s second-oldest sealed terrarium.

The oldest one is claimed to be one grown by David Latimer of England, started in 1960, when he planted a single tradescantia cutting inside, and last opened in 1972, when he added a bit of water, then sealed again, never to be reopened. That means it has been growing inside its bottle with no additional air, water or fertilizer for 47 years. The same photo has been circulating on the Internet for at least a decade. David has certainly aged since then, but the appearance of the terrarium probably hasn’t changed.

My son Mathieu started “my” terrarium when he was 10 years old. He didn’t ask my permission nor my advice, but presented me one day with a large bottle with a miniature landscape inside, composed of cuttings he had taken from among my houseplants. He wanted to see how long plants could live in a bottle with no added air or water. So, we put it under my plant lights and waited.

He is now 40 years old and his terrarium is still alive, making it 30 years old. That’s a far cry from 47 years, but still, I’ve not heard of any other terrarium older.

When he presented me with the finished terrarium, I knew the experiment wasn’t going to work perfectly. Most of the plants he had chosen weren’t “terrarium plants.” For example, he’d included some cactus in his mini-garden and they don’t like high humidity. And it was really very humid: condensation covered the sides of the bottle most of the time. Mathieu ought to have left it open for a week or so to bring the humidity down before sealing it forever.

Over time, various plants petered out one by one, starting with the cactus: they only lasted a few weeks. And moss began to grow everywhere: on the soil, on the sides of the glass. Obviously, there had been moss spores either in the potting mix or the air when he assembled the terrarium.

That appearance lasted for years, but even the moss has since died back. The sides are now covered in what I can only presume to be some kind of gelatinous translucent algae. And all the higher plants finally disappeared, except for one: a miniature sinningia (Sinningia pusilla). Instead of dying out, it spread. The original single plant is now a colony of—I’m guessing, of course!—over a hundred, entirely covering the soil. And they bloom on and off over the year, sometimes with dozens of flowers at once. But you can often barely see them through the glass, thanks to the algae and the condensation.

The 30-year-old terrarium is no beauty: for that, you’d need to open it up and give the sides of the bottle a thorough clean-up … but that would put an end to the experiment. So, there it sits under my plant lights, year in, year out, thriving in its own special way.

How Does It Work?

But how can plants survive for so many years inside a sealed container? It’s because they recycle everything!

They use carbon dioxide during the day for their growth and give off oxygen as a by-product. At night, they invert the process, giving off carbon dioxide and absorbing oxygen. They absorb water through their roots, then give it off through their leaves as water vapor that then condenses into water droplets again to water their roots. Minerals get recycled when old leaves and flowers die and decompose, fertilizing the news ones to come. (At any rate, most plants don’t need anywhere near the amount of fertilizer humans try to force upon them.)

The only “input” plants need is light, their unique source of energy, and I’ve been providing that by setting the container under my plant lights.

The top of the terrarium used to be perfectly white; now there’s a bit of rust. Corrosion! It will eventually eat through the top and put an end to the experiment, but that could take another 30 years; perhaps even more.

Mathieu, you’re hereby warned that when I die, you’re to recuperate the terrarium and either take care of it (all it needs is room temperatures and a bit of light) or give it to someone who will.

Thus, the experiment will continue and the world’s second-oldest terrarium will live on for probably a long, long time.