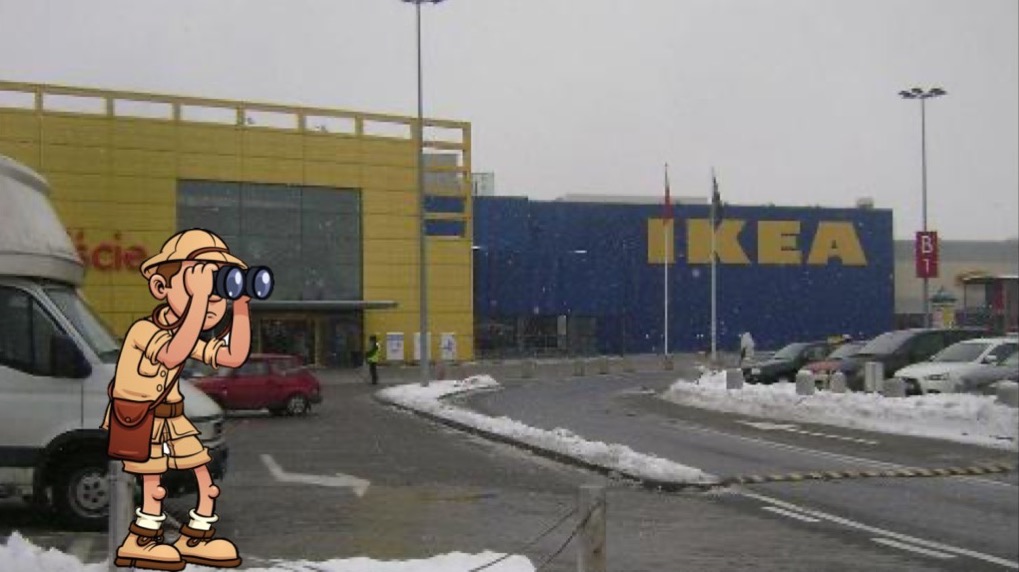 I hadn’t been to an IKEA in over 30 years. I simply didn’t need to go to one: the years of being half of a young couple buying cheap furniture to get ourselves started were long over. And we were still using many of the things we bought back in the old days, especially those IKEA bookshelves. My wife has still gone from time to time and came back with knickknacks, but I’m not into that sort of knickknacks … unless they carry out photosynthesis.

However, I recently found out that IKEA now sells houseplants. Maybe they did back in the day, but I don’t remember that. Their web site showed some plants that I might just be interested in and since I was nearby, driving back from a garden center where I had not found what I was looking for, I thought I’d drop in.

I vaguely recalled that, 30 years ago, you are supposed to follow arrows and wander through the huge store, but I wasn’t in the mood for that. Where were the plants? I found a panel listing the various departments, but the word “Plants” was not on it. I started to follow the arrows and began to realize this was going to take time. Too much time. Where was the exit?

I came up against another panel and looked again. This time, I found “Pots and Stands.” Almost certainly, the houseplants would be with the pots. Pots were numbered 21 … out of 25 departments. A lot of walking to do! Then I noticed there were shortcuts. So, I cut from one to the next, checking the numbers upon arrival to see where I was, and soon found myself at Department 19. From there, I could see plant pots in the distance. Eureka!

At first, there were only pots and lots of plastic plants, but further along I came across the real deal: living houseplants.

Well, more like semi-living houseplants. Most were in terrible shape. I would have been embarrassed to show plants in that state. Dead and half-dead plants mixed with still living, but struggling ones. Plants packed in together, stacked one shelf above the other, meaning some were getting no light at all. (And plants live on light!)

This was the kind of bring-in, sell-fast plant negligence I was used to seeing in the plant display at my local supermarket, where plants get zero care, so if you didn’t buy a plant the week it arrives, it won’t be worth purchasing by week two. Buyer beware!

The succulents looked especially crappy, but people were buying them, picking through the scraps looking for ones that might be salvageable. I checked out the orchids: most had flowers dropping off and yellowing leaves, a sign they’d probably been there without watering for weeks if not months. Some of the foliage plants seemed to be more recent deliveries and were in better shape, but I found nothing interesting there.

Then I spotted a pseudo-bonsai: a so-called “ginseng fig”. This is a Ficus microcarpa grafted into exposed ficus roots. I’d never tried that combination and was curious. It wasn’t too etiolated: the upper leaves were small and wimpy, but I could prune the plant back a bit once I got it home. I lifted the plant out of its pot (yes, I do that sort of thing when I’m buying plants) and the root system seemed extensive and in reasonable shape with no sign of unwanted insects, but it could use a thorough watering.

The black ceramic pot it was set in was a rather useless thing, with the saucer glued on to the pot, meaning you’d never be able to judge whether it you’d watered too much or not, but I could repot back at home. And the price was reasonable. Sold!

I lugged the rather heavy plant to the checkout, yet one more short cut away, only to discover endless line-ups. So, I patiently waited my turn. I was, of course, in the slowest line.

Wouldn’t you know it was an automated cash register? So, like most seniors whose brain processes are still stuck in the 1970s, I fumbled my way through the payment process, eventually succeeding, then looked for a bag or plant sleeve to put the plant in. There was none.

There was a “cash register supervisor” at hand, making sure we old-timers managed to push the right payment buttons, so I signaled her over and asked for a bag or two to cover the plant. I’d brought my plastic shopping bag with me, but it was far too small. And it was 19˚F (-7˚C) outdoors: you just don’t take a tropical plant outside in that kind of weather. She pointed to a pile of square sheets of off-white paper, the kind you wrap ceramics in, and handed me a stapler. I was to wrap my plant in those.

So, I set to work: stapling three sheets together, then three sheets to those, then three more to those, forming a square which I figured would be large enough for my plant (about 2 feet/60 cm high and 18 inches/45 cm in diameter). But I soon realized that I hadn’t put in enough staples, because when I pulled the wrapping upward, that left huge gaps everywhere. So tried to add more staples, but that didn’t work so well. I was tearing more sheets than I was fixing, so I added extra ones. Then the stapler jammed. I looked at the supervisor, pointing to the stapler. She looked back at me and shrugged sympathetically, but unhelpfully. Obviously, unjamming staplers was not part of her job description.

Out came my pen knife. Yes, I’m one of those guys who keeps a Swiss Army knife on my person at all times (except in airports). I figured store security would be on me like a shot for pulling out a concealed weapon and I’d have to get my wife to bail me out of jail, but no one showed up. I unjammed the stapler, discovering as I did that there were only two staples left and I was nowhere near finished.

I signaled the supervisor again, waving the now-empty stapler and she came back with a fresh one. Maybe she could find me some tape, I suggested. That would be easier than stapling. She talked to a colleague who sauntered off to look for tape … and never came back. It was probably her break!

But that wasn’t my only concern. Time was passing.

I purposely avoided looking behind me at the people waiting in the line to pay, afraid of their murderous glares as I clumsily tried to wrap my plant.

I signaled the supervisor again. Wasn’t there somewhere else I could move my packing efforts in order to free up the till? She found a row of unopened cash registers and moved me there. (Should have done so from the start, in my opinion!) So, I continued wrapping, tearing, adding more sheets to cover holes, stapling again. It probably took me 15 minutes.

I certainly had the most outrageously wrapped plant anyone had ever seen: 17 sheets of mostly torn and mangled paper protected my plant from the cold, but at least I was satisfied that it would survive the short walk to my parked car, then from my car to the house once I got it home. And indeed, it did.

It’s now sitting in my “quarantine window”: a window in the basement where I put new plants, well away from my other specimens. In forty days (quarantine comes from French for “quarantaine”: 40 days) I’ll inspect it and, if all goes well, will move into shared space with other plants. I’ll certainly repot it too, come spring. (I really hate that pot!) Then I’ll see about whether I can turn my pseudo-bonsai into something more like the real thing.

I doubt if I’ll be going plant shopping at IKEA in the near future. Certainly not in winter. Or if I do, I’ll have to bring a really big bag, just in case.

I wonder if there’s a way of finding out when they receive a new houseplant delivery? That would be the right time to pick up something, not after the plant has been so neglected it’s half dead.

I’d accord my local IKEA a C- for plant choice (most of the plants were pretty standard) and an F for plant maintenance.

And there is no rating low enough for their plant wrapping offering. Squares of paper? That’s ridiculous. Isn’t IKEA a Swedish company? Don’t they have a winter in Sweden? Surely, they don’t expect customers to wander out of a Scandinavian store during a snow storm with an unprotected palm tree or spathiphyllum!

Come on IKEA! If you’re going to sell plants, you have to at least ensure your clients can get them home alive!

4 comments on “Plant Shopping at IKEA: An Adventure Story”