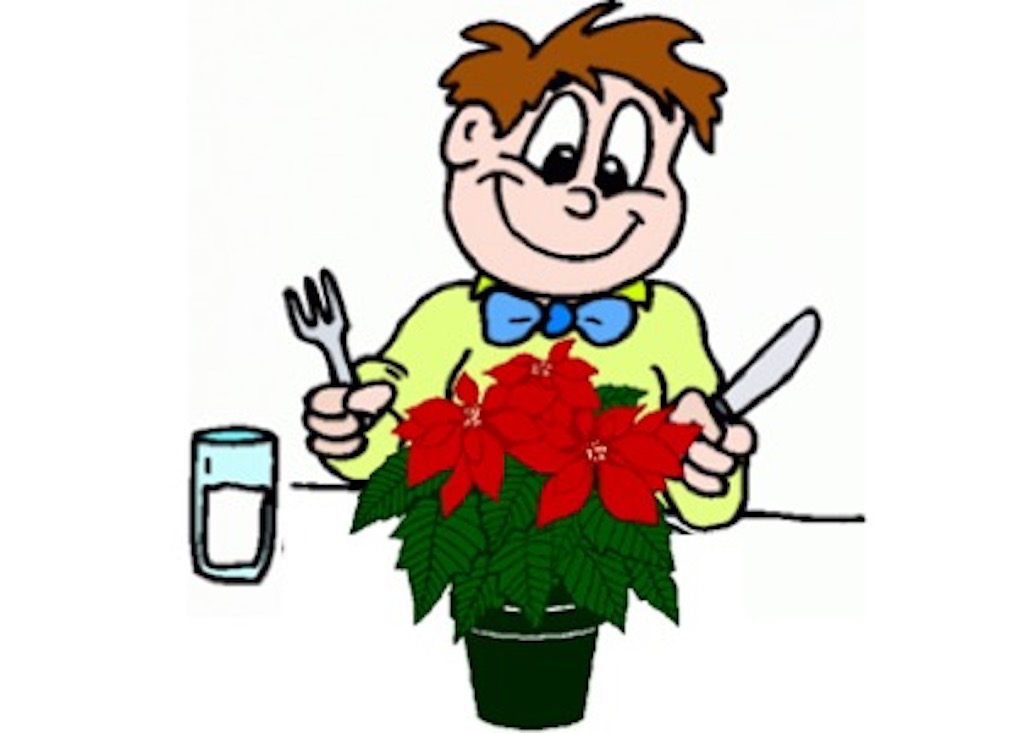 It’s that time of year again. As our favorite Christmas plant, the poinsettia, starts to pop up in stores everywhere, the rumor mill goes into overdrive. “Be careful,” you’ll hear, “they’re very poisonous.” You’ll even see some apparently serious sources (magazines, newspapers, websites, etc.) repeating this information … but it ain’t necessarily so.

The whole story began with an urban legend that appeared in 1919. A California newspaper of the sensationalist variety (sort of an early 20th Century National Enquirer) published a story claiming a two-year-old Hawaiian child had died after eating a poinsettia leaf. Then other newspapers around the world picked it up. Although this information proved unfounded, the story continues to circulate, in various forms, to this day. That’s one hundred years of fake news!

Not Toxic, but Not Edible Either

The poinsettia (Euphorbia pulcherrima) belongs to the genus Euphorbia, well known for its poisonous plants. However, the degree of toxicity varies greatly among the some 2,000 species: some are very toxic, others less toxic and some are even edible. Their white sap contains a wealth of chemical compounds among which terpene esters are probably the most toxic.

The poinsettia is among the least toxic species. In fact, poinsettia sap should be considered an “irritant” rather than poisonous. The milky sap (latex) dripping from cut stems and leaves may irritate the mucous membranes or the eye. And if you’re allergic to latex, you will be to poinsettia latex as well. For that reason, it is always wise to wash hands after pruning a poinsettia. Besides, you’ll want to wash your hands: the sap is sticky.

As for oral consumption, poinsettia leaves have a nasty taste which causes humans and animals to spit them out quickly. Swallowing a few leaves will have no detrimental effect, other than a possible reddening of the inside of the mouth. If ever someone eats a lot of leaves, however, he can suffer from vomiting or diarrhea … just as he would if he ate any other inedible product.

What Do the Stats Say?

It is interesting to take a look at the statistics about poinsettia toxicity. For example, the American Journal of Emergency Medicine reported in 1996 that of the 22,793 cases of poinsettia exposure between 1985 and 1992, not only were there were no fatalities, but 92.4% of subjects (most of whom were young children) had no symptoms at all. According to POISINDEX, a 50-pound (23 kg) child would have to eat between 500 and 600 bracts (coloured leaves) to become sick. Moreover, with the exception of the urban legend mentioned above, no fatalities connected to poinsettia consumption have ever been reported.

To make a comparison with other products commonly found in our homes, the poinsettia is less toxic than hand soap, table salt and coffee, all products that are not normally considered toxic but could theoretically kill you if you consume too much of them. Even spinach, rich in oxalic acid, is more toxic than poinsettia leaves … and we regularly feed spinach to babies!

But What About Pets?

Several years ago, the ASPCA, the most important reference in plants toxic to animals, still listed the poinsettia as highly toxic to cats, dogs and horses. Now it lists it is solely as an irritant. To quote, it is “irritating to the mouth and stomach, sometimes causing vomiting, but generally overrated in toxicity.”

In conclusion, therefore, no, the poinsettia is not toxic per se, but neither is it edible. Simply don’t leave it within reach of children or pets. And if ever a child or pet manages to eat a leaf anyway, they probably won’t enjoy the experience, but at least you won’t have to worry.

Adapted from an article originally published on November 28, 2015.