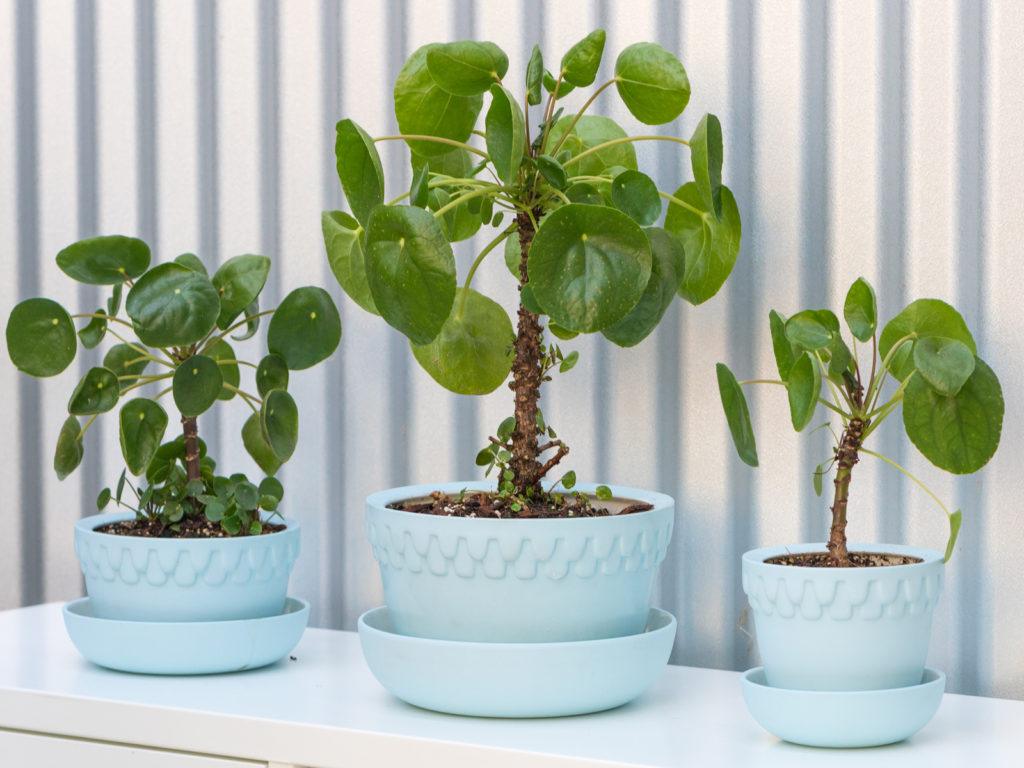 I first heard of an unusual round-leaved houseplant back in the 1980s. I was at that time the editor of the Houseplant Forum newsletter and a woman from Vancouver sent me a letter with a piece of plant inside. “What is this?” she wanted to know, “A friend gave me a cutting, but I can’t find anything about it!”

I immediately figured it was a peperomia (Peperomia spp.) and set about digging through my plant books and magazines looking for it. (There was no Internet at the time, of course, so where else could I go for good plant information?) But no luck! I was about to give up when the latest edition of Kew magazine arrived in my mailbox … highlighting exactly this plant! What a fortunate coincidence!

It turns out it wasn’t a peperomia, a plant in the pepper family (Piperaceae), but instead a pilea, Pilea peperomioides, of the nettle family (Urticaceae). Indeed, botanists too thought this plant looked a lot like a peperomia and Ludwig Diels, who first identified the specimens collected in China by the Scottish botanist and explorer George Forrest in 1906 and 1910, made that quite clear by calling the plant Pilea peperomioides: the pilea that looks like a peperomia.

Of course, I potted up the piece of plant in the envelope, only slightly wilted from its trip through the postal system … and have been growing P. peperomioides ever since.

Story of a Traveling Plant

The story behind P. peperomioides is actually quite amazing.

After its initial discovery in the Cang Mountains of Yunnan, China in 1906, this unusual pilea essentially disappeared from view, at least in the Western world. Then, in 1945, Norwegian missionary Agnar Espegren found it again in a market in Yunnan Province. Shortly thereafter, he was forced to flee China with his family, but they brought cuttings of the plant with them, settling temporarily in Calcutta for a year. Then they returned to Norway, bringing P. peperomioides with them.

Espegren began sharing cuttings with friends in Norway and by the 1960s, the plant was being distributed from plant collector to plant collector elsewhere in Europe. It apparently reached Great Britain through a Norwegian au pair in the 1970s. It showed up in North America and Australia in the 1980s and spread there too, never via professional nurseries, but as a pass-along plant, shared with friends and neighbors.

Recently, commercial nurseries have picked up on the trend and you can now buy P. peperomioides in most garden centers. But it’s far more interesting to get yours as a cutting from a friend, don’t you think?

What to Call It?

I’ve heard this plant being called missionary plant, friendship plant, pancake plant, even UFO plant, but the name that really seems to have stuck is Chinese money plant and that’s the name I’ll use here.

It is, indeed, very popular in parts of China where, Feng Shui oblige, its round, flat, coin-shaped leaves are considered to be a sign it brings wealth and prosperity. I must admit that, after over 30 years of growing this plant, I’m still far from making a fortune.

The plant itself is rather modest in size, rarely more than 24 inches (60 cm) tall and 12 inches (30 cm) wide, with an upright brown stem, sometimes woody at the base. Over time, it produces offsets around the base, a certain distance from the mother plant.

It’s really a very curious-looking plant, largely because of its leaves. They’re smooth, dark green, round and peltate (shieldlike), that is, the petiole is fixed to the back of the leaf, close to the middle, rather than at its edge as with most plants. They can be up to 6 inches (15 cm) in diameter, although usually much less, with petioles of varying lengths.

It rarely blooms indoors unless it has very bright light and a fairly cold winter. Even so, the tiny whitish to pinkish flowers on a spreading cyme are not very remarkable. Like other pileas, though, they’ll give off puffs of pollen when you water the plant (see Cannon Fire in the Kitchen).

Finally, the Chinese money plant is non-toxic and therefore safe around children and pets.

The Chinese money plant is a pretty basic houseplant and will thrive under basic houseplant care. Intense to moderate light, watering when the potting mix is clearly dry to the touch, average indoor humidity and temperatures (always above 50˚F/10˚C at night), etc.

Pay no heed to warnings it can’t take full sun: it loves sun. Just give it time to acclimatize if you move it directly from deep shade to an intensely sunny spot.

Do give it a quarter turn every now and then so its leaves will spread in all directions and not just bend towards the light source.

Repot every two years or so using any good houseplant blend. Cactus soil is fine too.

As for fertilizing: sure, go ahead and “feed” it occasionally if you want, but don’t expect it to react much. If you don’t fertilize it, it will still do just fine.

Propagation is easy. The plant produces offsets you can simply dig out and pot up. It’s also easy to grow from stem cuttings started in potting mix kept slightly moist. You can even start cuttings in water, although the success rate is lower. (Hint: pot up the cuttings without delay, as soon as roots form).

The Chinese money plant: if you’re lucky enough to own one, don’t hesitate to keep up the long-standing tradition and share cuttings and divisions with friends and family!

3 comments on “The Pass-Along Pilea”