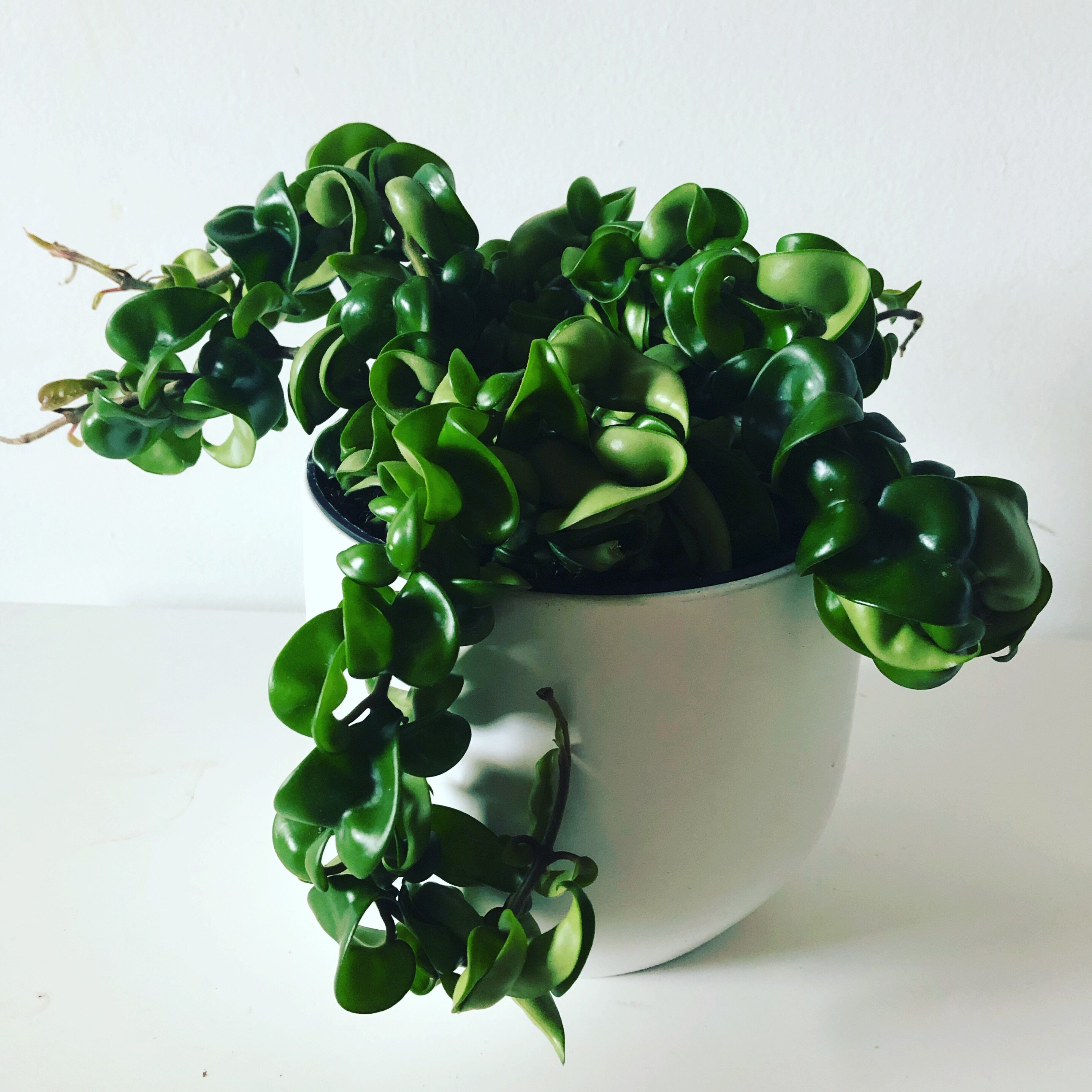 The plant known as the Hindu rope plant is (probably*) a strange mutation of the better-known wax plant or porcelain flower, Hoya carnosa. It is truly an odd plant, with its thick stem covered in thick, waxy, dark green, highly contorted leaves that twist and turn and dimple, usually completely hiding the succulent stem. Because the leaves are so curly, some show more of their paler green underside than their topside, which can’t be that good for photosynthesis.

It’s been around for a long time, probably since the 1950s. Some claim it was released by the California hybridizer Ed Hummel and came about through his experiments with X-rays on plants, but I don’t know there is any proof of that. Besides, I’ve seen a regular H. carnosa with one stem that mutated to a similar twisted form with no outside help, so I don’t think radiation is necessary.

The original H. carnosa is a climbing plant, but this one seems content to dangle from its pot, with long strands of stem-covered leaves that creep to the pot edge, then hang nearly straight down, like rope, hence the common name.

It’s a very irregular grower, sometimes growing slowly but surely, then stopping completely for a year or more, then suddenly putting a growth spurt: a thick new stem that extends rapidly (for a hoya, that is) with numerous small leaves that soon grow and twist to surround it. Young stems usually grow upward at first, then hang down under the weight of the developing leaves.

It also blooms … eventually (you may need to wait 2 or 3 years). Puff-balls of fuzzy pink unscented flowers with a red center that barely extend beyond the leaves (and indeed, sometimes mix with them) appear occasionally, usually in spring or summer. They last about 2 to 3 weeks. The blooms always seem to come out of nowhere, as the flower stalk (spur) that bears the buds is usually hidden by the twisting leaves until the last moment. Do not remove the spur from which they appear: more flowers will sprout from the same spur in the future.

There are also variegated varieties of this plant.

There is also a much rarer variety with inverted variegation, sold as H. carnosa ‘Compacta Medio-picta’, ‘Lura Lei’ or ‘Mauna Loa’, where the center of the leaf is cream-colored and the edges are green. It’s thought to be a mutation of ‘Krimson Princess’.

Grow Your Own Hindu Rope

This is a tough, easy-to-grow, no-nonsense plant, slow as molasses in January, but then, aren’t most truly easy plants slow-growing?

It seems to succeed in everything from full sun to fairly deep shade, although bright light with some direct sun is best, in any well-draining potting mix. Let the mix dry out at least slightly before watering thoroughly with tepid water. It’s said to prefer being allowed to being rather cramped in its pot and so won’t need repotting for years. Fertilize if you want, although it seems to grow just as well without fertilizer as with it. It also seems unfazed by dry indoor air.

The one thing it will not tolerate is cold temperatures. The ideal temperature range for this plant is 15–29 °C (60–85 °F). Although it will enjoy a summer outside in half-shade, do bring it in long before frost hits, when night temperatures approach 10 °C (50 °F).

Multiply your Hindu rope through 10 cm (4 in) stem cuttings, removing a few lower leaves to free up a bare section of stem. Root the cuttings in perlite, vermiculite or regular potting soil. And yes, they are slow to root and even slower to show any signs of growth!

Hindu rope is a fairly common houseplant and most garden centers carry it at least occasionally. If not, there are numerous suppliers on the Internet that offer it. The variegated forms are not as common and you may need to do a more thorough search to locate them.

One thought yet to consider. Do you actually want this plant? Because, in my opinion, it is downright ugly. But maybe there is beauty in its ugliness. You decide!