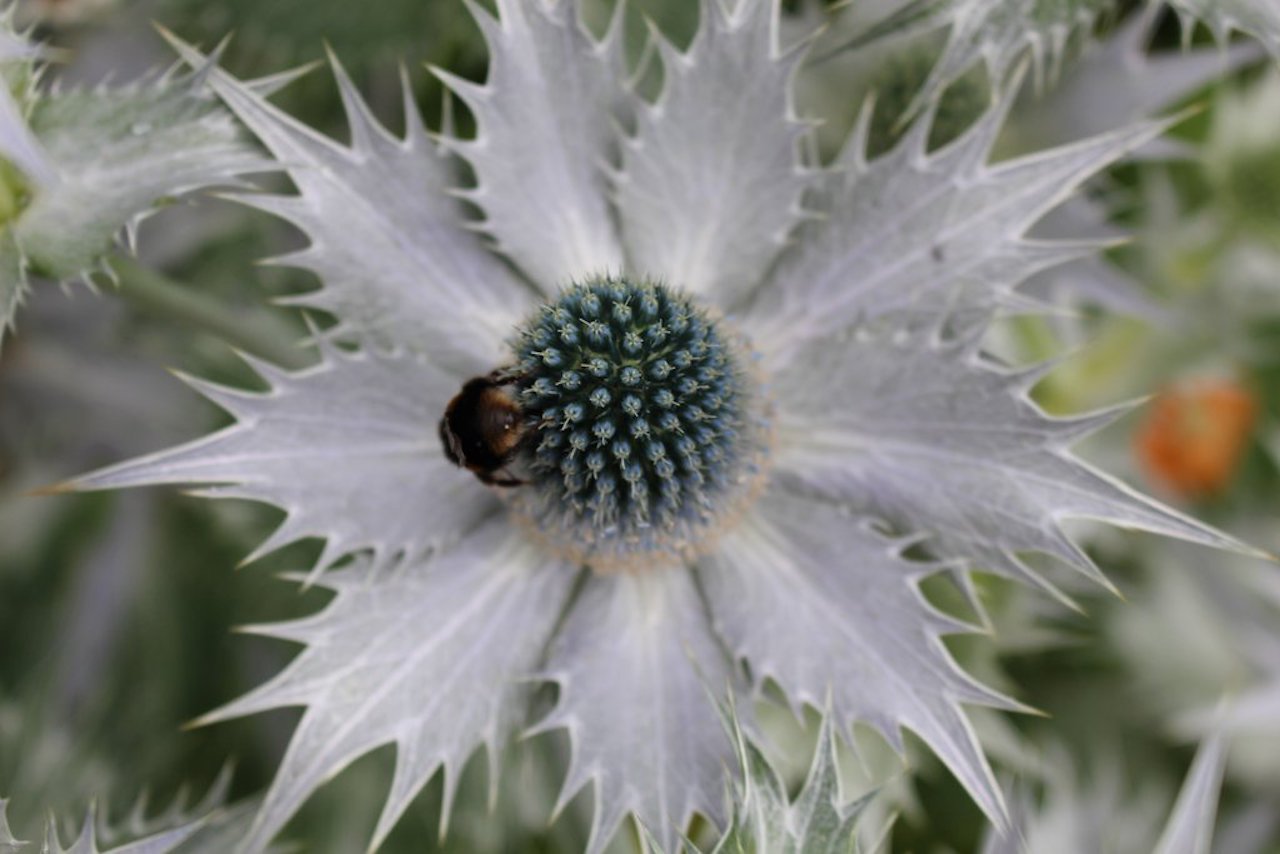 She’s tall, prickly, wears an eerie Elizabethan collar and appears icy blue in the moonlight. And she pops up unexpectedly in the strangest places. A stunning ghost of a plant … with quite a story behind her: Miss Willmott’s ghost.

Of course, that’s not her real name. That would be giant sea holly (Eryngium giganteum).

The plant picked up the name Miss Willmott’s ghost early in the last century, named for Ellen Ann Willmott (1858–1934), the English heiress turned plantswoman. She claimed to have grown over 100,000 different varieties on her various estates, notably Warley Place in Essex, England. She funded plant-hunting expeditions to China and several plant species are named after her (Ceratostigma willmottianum, Iris willmottiana, Rosa willmottiae, etc.). She was also a hybridizer (notably of narcissus) and an influential member of the Royal Horticultural Society, one of the first women allowed a role in that august society.

Her passion for horticulture knew no bounds; at one point, she employed 104 gardeners at Warley Place: if even so much as one weed were to be found in any gardener’s sector, he would be sacked on the spot. She wrote books on gardening and her gardens. Celebrated landscaper designer and author Getrude Jekyll called her “the greatest of all living women gardeners.” She herself wrote, “My plants and my gardens come before anything in life for me, and all my time is given up to working in one garden or another, and when it is too dark to see the plants themselves, I read or write about them.”

But Ellen Willmott also lived well beyond her means. She gradually squandered her fortune, went bankrupt and was forced to sell her estates. She eventually died penniless. She also became increasing eccentric, even paranoid, booby-trapping her estate to deter thieves and carrying a pistol in her handbag at all times. She also had strange gardening habits, one of which led to the name Miss Willmott’s ghost.

“Liberating” Seeds in Other People’s Gardens

As an influential member of the Royal Horticulture Society, Willmott was easily able to wangle invitations to the most splendid private gardens in Europe. She had her own views on garden design, preferring naturalistic styles, and disapproved of formal gardens. To that end, she is said to have always carried in her pocket seeds of giant sea holly (E. giganteum). If she disliked a garden, she would toss seeds of the plant into it. Since giant sea holly is a bit of a garden thug, it would grow and throw the designer’s plans into disarray. It became her signature plant.

And since it self-sowed and long survived her, it eventually become known as Miss Willmott’s ghost.

Portrait of A Ghost

Giant sea holly is a tall biennial, easy to grow in cooler temperate climates (USDA zones 4 to 7) and able to survive in poor, well-drained, even dry soils where it maintains itself by self-sowing. It can be a tall plant, usually about 1.2 m (4 feet) tall, but sometimes 1.8 m (6 feet). In my garden, it’s the latter, rising on stiff stems from well above most of the plants around it.

It’s quite a statuesque plant, forming an innocuous evergreen rosette of broad, heart-shaped plain green, lower leaves the first year, but then sending up in the second a stiff, thick, blue-green stalk of smaller sessile (without a petiole) stem leaves that are narrower, distinctly bluish with ivory veins and surrounded in nasty-looking prickles. And it becomes increasingly thorny and thistlelike as it comes into bloom, with numerous stems each bearing a cone-shaped cluster of bluish-silver flowers about 10 cm (4 inches) long, spookily surrounded by collar of spiny, holly-like silver-gray bracts up to 6.5 cm (2.5 inches) long. At this point, the whole plant seems to be saying: “Don’t mess with me!”

Stunning in the garden on a summer’s day, the plant is even more impressive on a moonlit night, when flowers give off what can only be described as a ghostly glow. Miss Wilmott’s ghost indeed! A definite star for your moon garden!

And of course, since it’s a biennial and therefore monocarpic, after it blooms, it dies.

There are other sea hollies (Eryngium spp.) that you can grow, all perennials and much smaller, but with similar flowers. As the name suggests, E. giganteum is the giant of the genus and the only biennial.

You could, I suppose, buy a plant of Miss Willmott’s ghost, but it makes far more sense to grow it from seed, readily available from many seed companies. Just sow it outdoors in early spring or, better yet, late fall (it needs a bit of a natural cold treatment to sprout well) in a sunny spot and let it do its thing. In year two (or three: in my short-season climate, it tends to act as a triennial), the flowers will go to seed, drop to the ground and take care of planting themselves. Thus, it becomes almost a perennial … but a perennial that pops up here and there, never exactly where you expected it.

My present small colony of Miss Willmott’s ghost showed up all on its own. I never planted it, but noticed one day an odd plant sprouting in my sunny border. I, of course, let it grow (what gardener can resist a mystery plant?) and was stunned to realize it was Miss Willmott’s ghost.

Now, more reasoned heads than mine will suggest that it’s most likely I accidentally introduced it through the soil of another plant or that a goldfinch (they love eryngium seeds!) dropped a seed from another garden, but I like to think that the ghost of Miss Willmott herself planted it as a reminder to let my garden be as natural as possible.

Thank you so much, Miss Willmott!