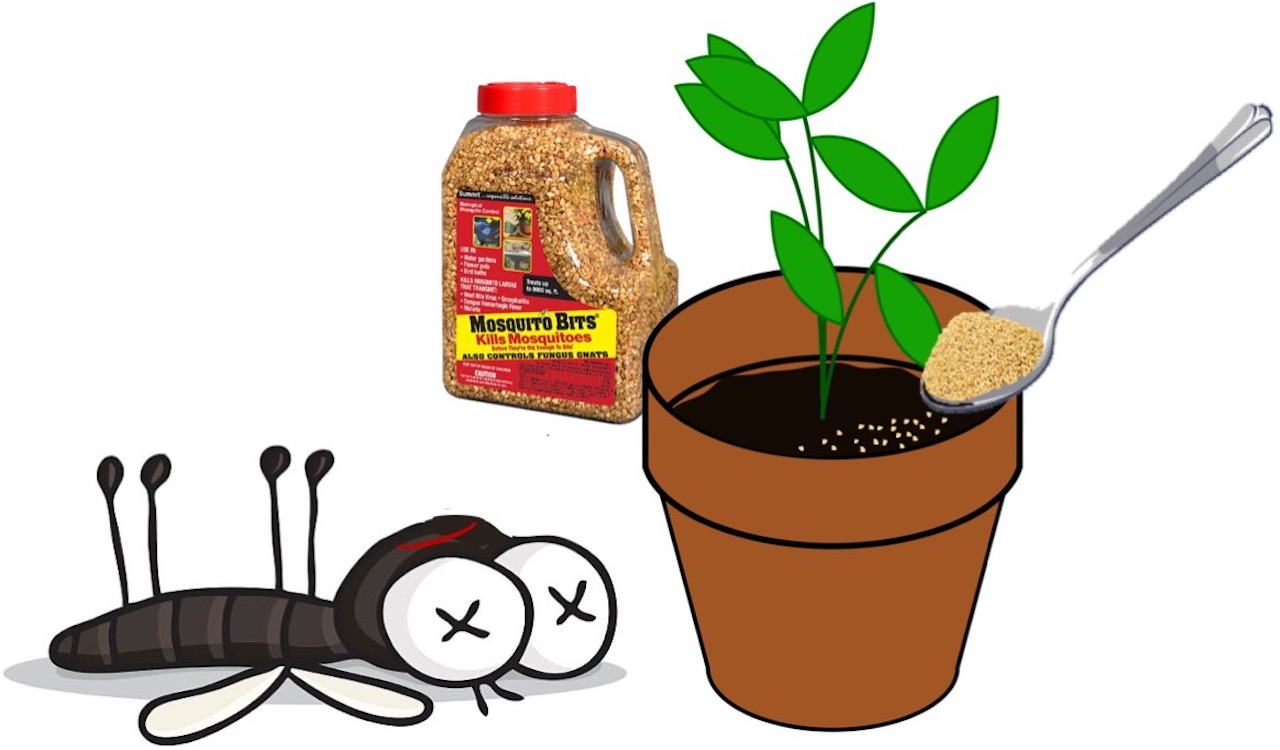 Fungus gnats are certainly annoying, especially because they are only houseplant pest that comes after you. Yes, the tiny black flies, looking much like fruit flies or midges, tend to flit around your face, drawn to the CO2 in your breath. No, they don’t bite, but who wants to be swatting bitsy flies in their living room? And if you have guests over: oh dear, whatever will they think?

Fungus gnats often come into our homes in peat-based potting soils, on new houseplants, in firewood or in various other objects brought uncleaned from outdoors. They’re very common and almost any gardener who grows plants from seed indoors or houseplants will likely run into them eventually.

Their tiny dark-headed larvae, looking like little translucent worms, live in moist potting soil, right up near the top. They aren’t terribly harmful: they mostly consume decaying plant matter they find in the soil mix as well as small fungi and algae, although they do sometimes nibble on a few root tips. The larvae are the ones to go after, since you know where they live. The adults, scattered here and there all over your house, can really only be quashed (read “squashed”) individually.

There are various treatments you can use to control fungus gnat (more on those here), but one that is particularly successful is to infect them the same disease that kills them in the wild. Yes, use Mother Nature against them!

This natural biological larvicide is called Bacillus thuringensis israelensis (BTI for short), a variant of the ubiquitous soil microorganism BT (Bacillus thuringensis), naturally found all over the world, BTI has long been commercialized as a control for mosquito larvae, but has always worked just as well on fungus gnat larvae as well.

Of course, the disease in question is not deadly to humans (or pets and not even most other insects, like bees and butterflies), but specifically to the larvae of fly species. In fact, commercially they’ve been sold up until recently specifically to control mosquitoes and black flies, with fungus gnats only recently being added officially to the list.

Of course, home gardeners have been grinding up Mosquito Dunks® and using them as a fungus gnat control for years, but that was technically illegal. (When you use a pesticide for a purpose other than that for which it is intended, you’re breaking the law.) But there is now a product that is legally approved for treating fungus gnats: Mosquito Bits®. Yes, the same as good old Mosquito Dunks®, but in the form of granules rather than mini-donuts.

Just sprinkle the little granules on the surface soil, 1 to 2 teaspoons per 15 cm (6 inch) pot and water them in. Or mix them into the potting soil as you pot plants up. Or soak 2 tablespoons in 1 liter (1 quart) of water for 5 minutes, then water the solution in.

The larvae ingest the bacteria and quickly stop feeding, then die, decomposing in the soil and enriching it in minerals. Repeat the treatment every 3 weeks if needed.

You can find Mosquito Bits® in many hardware stores in the US. Elsewhere, you can buy them online. Or go back to grinding up the much-more-readily-available Mosquito Dunks®. I promise I won’t tell the cops!

7 comments on “BTI Against Fungus Gnats”