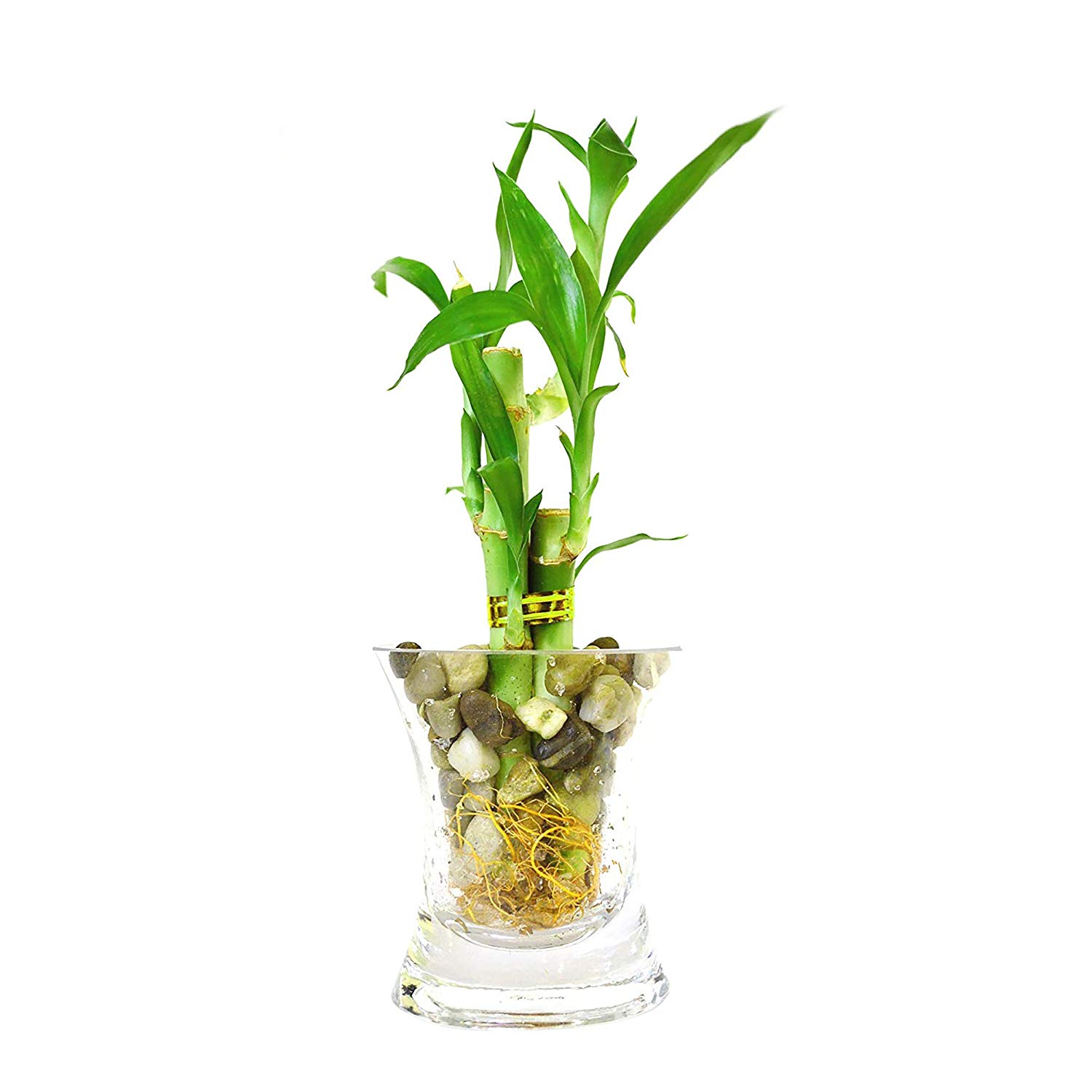 I’ve been growing a bamboo with five stems for 1 year now. It’s in a glass container filled with small white stones. I keep it in a window, but not in the sun. Every week, I have to empty the water and rinse the stones well to prevent the water from spoiling. It’s barely grown at all and has started to lose leaves. I’m hoping to give it a new lease on life by planting it in soil. Is that possible? If so, what kind of pot, soil and vitamins do I need and how often should I water it?

Answer: The “lucky bamboo” that stores have been selling us for a few years now is not a real bamboo, but rather cuttings of a dracena called the ribbon plant (Dracaena sanderiana). It’s normally a densely-leaved tropical shrub, but to give it a bamboolike appearance, all of its lower leaves have been pulled off to reveal its stem whose numerous well-spaced nodes do indeed recall a bamboo.

The aquatic environment (stones and water) in which this plant grows is not a natural one (it normally grows in soil) and this explains why it has put on little growth in your home. Also, you’re “lucky” in that yours seems healthy other than for losing a few leaves, as the lucky bamboo often starts to seriously decline after a year or two of cultivation in water. Most eventually die.

You have the right instinct, though, by thinking of planting it in soil. This move to a terrestrial environment (into potting soil) should give your plant a real boost, assuming its decline isn’t too advanced.

There are two ways of doing this: you can transplant the original plant into soil or you can start a new plant from cuttings.

Do be forewarned that a lucky bamboo sometimes reacts badly at first when it’s transplanted into potting soil: yours may lose several more leaves. That’s because, having spent all its life soaking in water, its roots have adapted to aquatic conditions and have to convert being terrestrial roots again. But that’s temporary. New, healthy roots soon form and from then on, you’ll actually see the plant both fill in more and grow faster.

Here’s how to successfully transition it from an aquatic environment to growing in soil:

1. Choose a grow pot (one with drainage holes, probably made of plastic), about 1 ½ to 2 times the diameter of the original pot.

2. Prepare a few cups of potting mix (houseplant potting soil is just fine) by pouring it into a bowl or pail and adding tepid water. (Moist mix is easier to work with than dry mix.)

3. Stir well to thoroughly moisten the mix. You’ll want it to have the consistency of a wrung sponge.

4. Place either a piece of newspaper or paper towel or a coffee filter in the bottom of the pot to prevent the soil from flowing out when you water. No drainage layer is necessary or recommended.

5. Fill the pot with moist soil to about half its height.

6. Remove the plant from its original pot.

7. If there are yellow or dead stems, remove them.

8. Knock the stones mixed with the roots free. You can always keep them for use as an ornamental mulch afterwards.

9. If the roots are moderately intertwined, pull them apart and spread them out away from the stems. If, however, they wrap around the inside of the original pot or form such a tangled mess you could never separate them, grab a pair of pruning shears and cut off the outside roots all around the root ball. No, that won’t hurt the plant! In fact, it will encourage it to form new roots more quickly. You can easily remove a third of the old roots without doing any harm to the plant.

10. Center the plant in the new pot and fill in around the roots with potting soil, tamping down lightly. (This assumes you want a cluster of plants in the same pot, as you could also have separated the stems, planting each in its own individual pot.)

11. Place the pot in a saucer slightly larger than its diameter and water gently to settle the plant in. Throw away any excess water that collects in the saucer.

12. Finally, place the plant under normal indoor temperatures in a spot that offers at least moderate light … perhaps its original location.

As mentioned, the plant may lose a few leaves at first, but will gain strength after a few months and should soon be even more attractive than ever.

Cuttings are the “fast and easy” method of saving an unhappy lucky bamboo. You’ll essentially be starting afresh and cuttings often start growing faster than transplants. Here’s what to do:

6. Cut the stems of the plant to the length you want. A 90˚ angle is fine. Compost the bottom of the stem and the roots.

7. With a cotton swab, apply rooting hormone to the base of each stem.

8. Using a pencil, make a hole in the potting soil for each stem, spacing them equally for a better effect.

9. Insert each cutting (stem) into a hole, cut side down, of course, ensuring that at least 2 nodes (3 nodes will give even better results) will be covered with potting soil.

10. Tamp down lightly so that the cuttings remain upright.

11. Place the pot of cuttings in a location that is slightly to moderately lit and at room temperature.

The roots that will form in this drier environment will be terrestrial roots and thus your lucky bamboo will be able to resume a more normal growth habit. Within a few months, you should see a huge improvement in its appearance. A lucky bamboo grown in potting mix can live for several decades.

Caring for a soil-rooted lucky bamboo is very easy: just give it normal indoor temperatures, reasonable light with maybe a bit of sun and water its root ball as soon as feels dry to the touch.

I can’t possibly predict exactly how often you’ll have to water: that will depend on the growing conditions. However, many people find that, when it’s grown in fairly good light in a pot that’s not overly large, they need to water about once a week. You’ll need to repot every year or so and eventually, perhaps after 5 or 6 years, you’ll probably have to prune your plant back a bit, as it can get quite large.

As for fertilizer (not vitamins), that’s only a minor concern, as the lucky bamboo is not a very greedy plant.

First, don’t fertilize at all the first year: let it get used to its new home. From the second year on, one or two applications of all-purpose fertilizer, applied in spring or summer according to the directions on the label, will suffice. And even if you never fertilize it, you’ll find that your lucky bamboo will probably do just fine.

Best of luck with your freshly renewed lucky bamboo!

11 comments on “Transplanting a Lucky Bamboo”