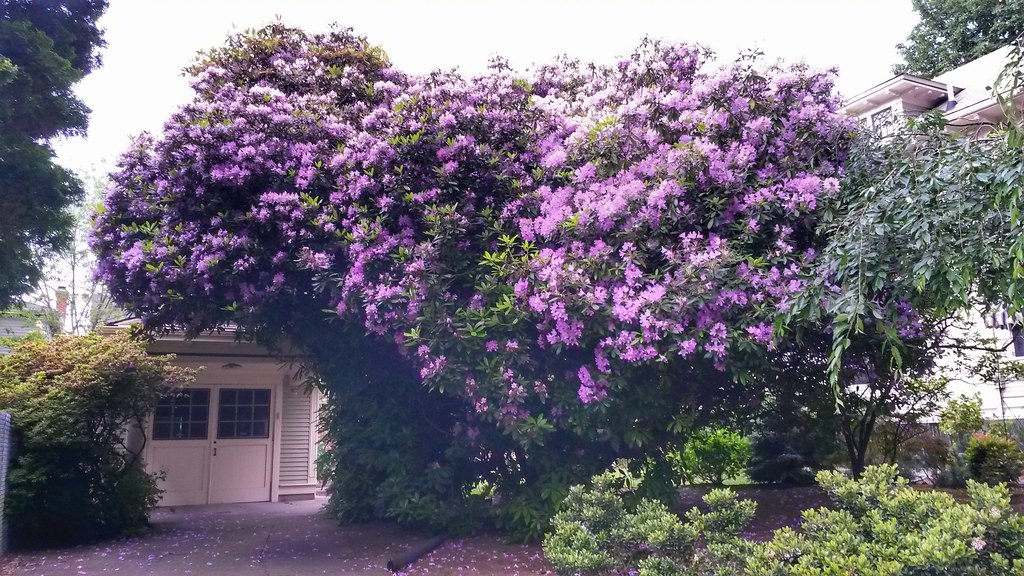 Some rhododendrons reach an enormous size if not pruned. Photo: Oh Kaye, flickr.com

Question: I have a very large rhododendron (2.5 m × 2.5 m/8 ft × 8 ft) that I would like to cut back severely after it blooms. Is that possible? It’s far too big for the space available and I no longer have the energy needed to wrap up such a huge shrub for the winter. I live in hardiness zone 4b.

Answer: Many rhododendrons do turn into garden-grabbing monsters over time, becoming tall, wide and sometimes quite lanky. They far exceed the dimensions you saw on the label when you bought it and probably used when calculating where to place it. (Few gardeners seem to know that the dimensions given on a rhododendron label don’t indicate its final size, but rather its dimensions after 10 years of growth. Thus, after 20 years, if they’re never pruned, they’ll measure approximately twice that.)

Fortunately, yes, you can cut an overgrown rhododendron back quite severely and thus reduce it to a more acceptable size. However, as you already seem to be aware, after such deep pruning, don’t expect it to take on a beautiful shape and abundant bloom for 2 to 3 years.

First, the ideal time to do undertake rejuvenation pruning is not after flowering (that’s when you do light pruning), but rather early in the spring, before the start of the growing season. Cut all the branches about to 60 cm (2 ft) high … and yes, you will need a saw! Some gardeners cut back even more severely, to 15 cm (6 inches) from the ground, but that sometimes backfires, the shock being so brutal that some plants don’t recover.

In the first year, your shrub will start to regrow, producing new stems and leaves, but will probably appear very spindly and unequal at first. It will probably take 2 or even three 3 years before it really fills in and starts to look good again. And it may well not bloom abundantly until the third year either.

In the future, when your rhododendron approaches the size you want, make a habit of pruning your shrub modestly after it blooms to restrain its development, shortening one branch out of three annually. That way, you can keep it at a more acceptable size even as you enjoy an abundance of flowers each year.

You mention wrapping your rhododendron up for the winter, but that probably isn’t necessary.

The idea that rhododendrons need winter protection to survive in cold climates is highly exaggerated. Wrapping them in burlap or geotextile may make you feel useful and does keep the wind off, but won’t keep them any warmer, so is generally a waste of time. I’m not saying installing some sort of screen between the plant and the prevailing wind can’t be useful the first winter, while it’s still acclimatizing to local conditions, but from then on, no winter protection should be necessary.

Your rhododendron certainly wouldn’t reach such a large size if it weren’t well adapted! There are many rhododendrons adapted to cold climates: hardiness zone 4 and even 3 and yours undoubtedly belongs to that group. So, in winter, just let it fend for itself.

6 comments on “How to Prune an Overgrown Rhododendron”